Hear 11-year-old child activist Ta’Kaiya Blaney from the “She Speaks” event. She started campaigning for Nature at age 9, starting with the Tar Sands. Since then she’s been in two films and spoke at the Rio +20 conference in Brazil.

This recording from the September 21st event in Vancouver, courtesy of Redeye Collective, includes her hit song “Shallow Waters” so you might want to download the CD Quality version. 15 minutes.

Download/listen to Jim Thomas from ETC Group on covert geoengineering (15
min) in CD Quality or Lo-Fi.

Russ George, the one-man geoengineering phenomenon, strikes again! And
despite an ocean dumping and geoengineering ban by 192 countries, George has help from Canada and the U.S.

This time the green-talking former CEO of Planktos Corp didn’t just dump some red paint off the back of rocker Neil Young’s yacht, as he did in 2002. He’s secretly added 100 tons of iron sulfate to the ocean off Canada’s West Coast.

In 2007, Radio Ecoshock did a full one hour interview with Russ George,
followed by a second program with his critics, including Pat Mooney of the ETC Group. Interest is huge. The Pat Mooney interview has been downloaded at least 20,000 times.

After Planktos went down in flames, amid accusations of shady promoters and stock manipulation, Russ George faded from the public eye.

George wants to make money by seeding the world’s oceans with iron to stimulate algae growth. Now the ETC Group has revealed his latest plot.

Radio Ecoshock speaks with Jim Thomas from the ETC Group, which at a Biodiversity Convention conference in Hyderabad India, heard rumors a geoengineering experiment had already occurred off Canada’s West Coast. The group investigated. They found serial ocean dumper Russ George was back at his game, this time claiming to have dumped 100 tons of iron sulfate into the Pacific Ocean. It was about 200 kilometers west of the mid-coast island of Haida
Gwaii. George says he created an algae bloom covering about 10,000 square kilometers of ocean.

No one knows what effect this will have. Several nations conducted a series of similar experiments, with real senior scientists onboard, but stopped due to concerns raised about unknown impacts.

Jim Thomas said dumping iron into the ocean has not been proven to permanently sequester carbon, may in fact release other greenhouse gases like methane and nitrous oxide, and could remove oxygen further down in the sea, killing off other forms of life. Even noxious algae might grow as well.

As a result of this, and other work by environmental groups, scientists and governments – partly in response to earlier attempts to change ocean life by the private company Planktos, headed by Russ George – 192 nations agreed to BAN OCEAN SEEDING EXPERIMENTS, and then to declare a moratorium on geoengineering experiments.

During the Planktos adventure, which Radio Ecoshock chronicled thoroughly, both Spain and Ecuador closed their ports to Russ George and his ship the Weatherbird II. They wanted no part of his schemes.

But in the summer of 2012, Russ George set sail in the rented fishing boat “Ocean Pearl” from a Canadian port. He claims the National Research Council of Canada was aware of his project, and supported it. Some junior Canadian scientists went on board to watch the results. A Canadian company contributed equipment called “Ocean Gliders“.

So two countries who agreed to halt ocean dumping and geoengineering in the ocean helped this amateur carry out a private geoengineering scheme. The Biodiversity Convention and the London Dumping Convention obviously need far more enforcement mechanisms, and more support from major players like the U.S., Canada and the UK, says Jim Thomas.

There have been a few exposes about the questionable dealings of Russ George, in Canadian and world newspapers, and on Radio Ecoshock, in 2007 when he attempted a previous ocean dumping plan. George was also head of a company pushing cold fusion, a technology that never materialized, despite being pushed in the over the counter stock trade. Find Steve Krivit’s investigation into the many claims of Russ George
here.

The ocean dumping company Planktos was backed by the disgraced (and convicted) Canadian financier Nelson Skalbania. Russ George promoted his plankton scheme to green groups without success. He managed to persuade the Vatican to use his company to off-set their carbon credits, even though he could not produce any proof that any carbon had been saved by his company.

This time, George persuaded a former commercial fisherman, now acting as a consultant for a small Haida village, in the Canadian coastal islands known as Haida Gwaii, formerly the Queen Charlotte Islands. That was John Disney. The two managed to find funding said to be over 2.5 million dollars for the venture, dubbed the Haida Salmon Restoration Corporation.

I don’t yet know where the money came from. Was it from the Haida tribe (who still wrestle with poverty for some of its members) – or from the Canadian government? Who paid for this carbon salesman to play with our common oceans, against all international agreements?

Be sure and hear my interview with Jim Thomas. My previous interview with Pat Mooney of the ETC Group has been downloaded over 20,000 times. It’s important stuff.

You’ll find a one hour interview with Russ George, where I confront him with claims made but not fulfilled. That blog entry, “Planktos: Offsets Real and Imagined” is here.

Then there is “Planktos II: The Intervention” – a full program with three guests who out the man, his questionable promotion of a cold fusion company, and his banned-from-trading man behind the scenes, Canada’s Nelson Skalbania.

My guests in that 2007 program are Dr. David Santillo the Greenpeace scientist, Pat Mooney from the ETC Group, and Vancouver Sun business investigator David Baines. It’s a tale of intrigue and misrepresentation that may have happened again – this time to a prominent First Nation in Canada.

Listen to/download that program here, and read the blog here.

This is one of my biggest fears about geoengineering. A single country could just start pumping sulfur pollution into the atmosphere, or even launch a rocket full of mirrors to block out the sun. Now we see it could just be a small scientific lab or even a member of the public determined to save the climate their way. It’s a free-for-all, likely to involve more desperate measures as the climate deteriorates. We should be frightened by the example Russ George sets.

This “rogue geoengineering” in the Pacific is shocking behavior by Canada and the United States, both of whom agreed to the ocean fertilization ban, and limits on geoengineering. It’s a disappointment from a respected West Coast tribe, the Haida – who have been environmentally progressive. Did they not look up George’s record as a promoter who does not deliver?

I’m not disappointed in Russ George. Everyone expected this driven man to try and try again. Russ George thinks he’s right, and everybody else is wrong. The publicity and the millions raised for each project, as the would-be “Doctor” or “Senior Scientist” sails again is all gravy to him. Russ George is a one-man ocean wrecking ball, and the poster-child for why we need ocean enforcement, and a real moratorium on geoengineering.

INDIGENOUS WOMEN SPEAK OUT AGAINST THE TAR SANDS AND PIPELINES

Stay tuned for another industrial crime. Indigenous women in Canada are raising their voices against the polluting tar sands, and the pipeline releasing their poison to the world. Others talk about indigenous people, trying to adopt that culture’s wisdom. On Radio Ecoshock, First Nations people speak for themselves.

Who cares about another pipeline in Northern Canada? When it threatens to pump dirty Tar Sands oil to China and the world, everyone needs to know.

Those who know best are the native people living close to the biggest source of industrial pollution on the planet. And those depending on the thousand streams risking poison from the Northern Gateway Pipeline from Alberta through British Columbia, to the pristine Great Bear Rainforest and coast.

First Nations women are taking the lead in speaking up for their communities, and the future. If the Tar Sands power Asia and America, climate catastrophe is assured. We can’t let that happen.

I’m Alex Smith. There’s not much more I can say. Our future and our children are at stake. 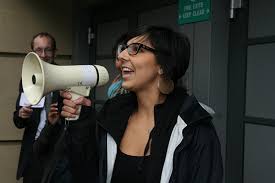 We start with Eriel Deranger, Communications Director for the Athabasca Chipewyan First Nation, neighbors and victims to the monstrous Tar Sands operations in the north of Alberta, Canada. She was recorded at the event “She Speaks:
Indigenous Women Speak Out Against Tar Sands” recorded in Vancouver on Sept 21st, by the Redeye Collective at CFRO Coop Radio. (Thanks Jane!)

There was a parallel “She Speaks” event against the Tar Sands in Toronto.

The Northern Gateway pipeline would send highly toxic tar sands crude through 1,000 mountain rivers and streams, across the Great Bear Rainforest, to a narrow fjord at Kitimat, British Columbia. All that risk to feed the oil addiction of the United States and Asia, from the world’s largest single source of pollution, the Canadian Tar Sands.

START YOUR OWN ACTIVISM

What can you do where you live? Listen to these ideas from the Tar Sands Network in the UK, represented by activist Suzanne Dhaliwal. She’s speaking against the Northern Gateway Pipeline, proposed by energy giant Enbridge, to carry highly toxic Tar Sands crude. Enbridge has just revealed they had 31 pipeline leaks since 2002.

Coming from a background of climate activism and her interest in protecting wilderness for herbal medicines, Suzanne Dhaliwal was in the UK, attending a climate camp, when she really realized what the Canadian Tar Sands were all about. She had partly grown up in Canada, and like most Canadian, never grasped the climate-killing importance of the Tar Sands, or their impacts on both wilderness and especially the First Nations people.

This drove her to co-found a network in the UK to oppose investments in the Tar Sands. Big pension funds and British banks bailed out by the taxpayers were heavily invested in oil companies in the Alberta Tar Sands. They started actions toward disinvestment, and more tar free communities. Suzanne has some good ideas on how you could oppose the Tar Sands, wherever you live.

I’m Alex Smith, asking you to organize however you can to make more “tar sands free” communities, and to stop the spread of this climate-wrecking madness.

This has been Radio Ecoshock. Download this and all our programs from our web site at ecoshock.org.

Thank you for listening, and caring about your world.