Download/listen to this Radio Ecoshock show in CD quality 56 MB.

Download/listen to this Radio Ecoshock show in Lo-Fi 14 MB. Coming up this week: an interview with Rob Stewart, Director of movie “Sharkwater” and now his latest “Revolution” – is the ocean dying? What can we do?

You can see food prices going up. It’s happening around the world, stressing budgets and leading to foodless days for millions of the world’s poor. You’ll find out why in an international media briefing by Lester Brown of Earth Policy Institute about rising food prices & his new book “Full Planet, Empty Plates”. Only on Radio Ecoshock.

We finish up with as Wes Regan of Vancouver tells us about urban farming in the poorest neighborhood in Canada.

Rob Stewart blew into world consciousness with his award-winning indie film “Sharkwater“. Sharkwater was one of the biggest selling Canadian films ever. It ricocheted all around the world. We start with the latest developments in saving the sharks.

As a result of that movie, and Stewart’s unrelenting campaign, over a hundred countries and many more cities have banned shark fin soup – the alleged delicacy wiping out the ocean’s top predator. Shark fin soup is banned at all Chinese government functions.

Now Stewart is back for a much bigger fight, the fight of our lives: how to steer a death-wish civilization in a better direction. His new movie, four years in the making, was released at the Toronto International Film Festival and again at the Vancouver Film Festival. It’s called “Revolution“.

The film has experts saying coral reefs could be mostly dead in 40 years or less. I’ve just seen a You tube lecture by Professor Alexander Tudhope, a geoscientist and climatologist from the University of Edinburgh. He seemed less certain of the coral fate, suggesting they could die off, but it’s still possible they may adapt enough to survive.

Stewart cites Charlie Veron, aka John Veron, a heavily awarded Australian scientist who warns on current path, the Great Barrier Reef will be dead in 20 years… and Katharina Fabricius, lead scientist at the Australian Institute of Marine Sciences.

These scientists are also part of the “Coral Triangle Initiative”

WHY SAVE SHARKS IF THE OCEAN IS DYING?

A key moment in the movie is when Stewart should have been celebrating his moment of triumph. Sharkwater was finally being showed in China, in Hong Kong, where shark fin soup is served. Its possible 100 million Chinese people will see it. But an audience question stumped him, almost invaliding his years of work: why struggle to save the sharks, if scientists say most big fish in the world could become extinct as early as 2048.

That extraordinary prediction is published science coming from a team led by Dr. Boris Worms at Dalhousie University in Eastern Canada. Radio Ecoshock covered that in 2006. Find my blog and the audio here.

Outfield Productions from Pakistan turned it into a You tube video found here.

Stewart was tossed into the much larger problems which threaten the world’s oceans. The largest of all, not just for the great coral reefs (nurseries of the sea), but for all creatures which form either shells or skeletons, is ocean acidification. He sets out on a journey to find out more.

The need for “revolution” comes from the inability of world governments to do anything at all to save the oceans. Only a major change to the system, Stewart concludes, can save the oceans, and us. The only group he can find that isn’t invested in the present system is youth and children. They are the best hope.

There is a hugely moving scene with Felix Finkbeiner, age 13, founder of the group Plant for the Planet. Finkbeiner is organizing youth to plant hundreds of millions of trees.

In some ways Stewart needed the same underground film techniques so successful in “Sharkwater”. Why do we still need to slink around without permits, to document the greatest threat to humanity and all species? We also discuss his relationship with another ocean defender, Captain Paul Watson of the Sea Shepherd Society. Watson is currently a wanted man, living on one of his ships in an undisclosed location. Costa Rica issues an international arrest warrant, claiming Watson had endangered a fishing vessel that was finning sharks, part of the research done for Stewart’s film. German acted on that warrant, even though it is doubtful Watson would receive a fair trial in Costa Rica, and despite widespread German support for his actions to save marine species.

Paul Watson skipped out on a $300,000 bail bond, and went out into international waters, in the open sea.

MONEY DISAPPEARS IF YOU SEEM TO “RADICAL”

Even though “Sharkwater” was phenomenally successful, Stewart still had trouble financing the movie “Revolution”.

Rob was painted green for Fill the Hill C-Day for Powershift in Ottawa Canada in 2009, just prior to the Copenhagen talks. Suddenly his funding promises dropped from 5 million dollars (he planned a 3-D underwater spectacular) to just $150,000. Rob packed his bags and cameras and went out on his own to film.

We learn Stewart has just published a book as well. It’s called “Save the Humans“. The book takes us into the back story of making both Sharkwater and Revolution, being partly biographic.

As Stewart works insane hours getting his message out, traveling the world, he has started a new environment group, the United Conservationists.

You can find the film web site at therevolutionmovie.com

I loved the movie. It’s deep and necessary. I hope it storms the world. 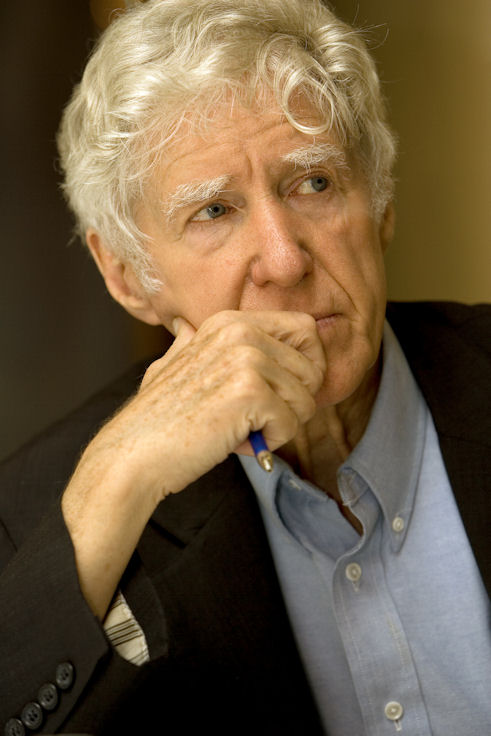 Lester Brown is one of the world’s treasures and truth-tellers. Decades ago he founded the World Watch Institute, which issued comprehensive annual State of the World reports.

One of Lester’s specialties has always been monitoring world food supplies, crop production, and the growing catalog of threats to the global food supply. He went on to found the Earth Policy Institute.

On September 27th, Brown held a briefing for world media about our current situation, and his new book “Full Planet, Empty Plates, the New Geopolitics of Food Scarcity.” I recorded it, and got permission to broadcast it to you.

Our situation is not good. The world’s largest food exporter, the United States, has just gone through a record drought (which still continues into October). Crop production is down, and world food reserves are far below what they should be.

Food prices, especially for grains, have risen around the world. Usually when that happens, there is political instability as well.

In North America and Europe, the consequences are not so grave. We spend much less of our total income on food, and most of the cost of food is actually in processing.

In the developing world, more than a hundred million people actually schedule “foodless days” (you can call it a “fast” is you want) because there isn’t enough for the table. In parts of Asia and Africa, at least 75% of all income goes directly for that day’s food. There isn’t any room for price increases.

Lester Brown goes on to catalog the many challenges we face in trying to feed 80 million more people every year. For example, many countries are already over pumping their aquifers. They have to go deeper and deeper, burning expensive diesel fuel for pumps. Some wells are going dry, and some rivers are going dry.

Add in climate change, with missed monsoons, droughts, storms wiping out crops, and you see the potential for a very unstable world.

This press briefing is loaded with facts mainstream media doesn’t bother to tell you. Don’t miss it.

There are lots of links and related downloads there, including the complete set of data sets.

There are mysterious gardens appearing in Canada’s poorest urban neighborhood – Vancouver’s downtown East Side. And why is a business group pushing local food?

Some Downtown East side residents have seen their share of problems. Along with the newly arriving condo owners, there is a mix of alcoholics, drug addicts, the disabled, the unemployed, and people who have been disadvantaged or abused. Some are First Nations.

Our guest is Wes Regan, Executive Coordinator of the Hastings Crossing Business Improvement Association in Vancouver, Canada. Wes toured internationally as an actor and musician, before becoming an urban geographer. He’s a founding member of the Vancouver Urban Farming Network, and the Urban Aqua-Farm Society.

We start with a little patch of vacant land in an area known for poverty and drug abuse. Squeezed between two old buildings, this lot on Hastings Street in Vancouver’s Downtown East Side used to be covered in garbage. Now it’s covered with food. It is a new urban garden.

Too often, we think of business being hostile to green initiatives. But Regan coordinates the local Business Improvement Association. It is an unlikely marriage, but works well when progressive business is involved.

Wes tells us about the Vancouver Urban Farming Society, and Sole food farm.

This is community supported agriculture, the CSA model. But there is a new wrinkle: people can pick the amount of food they need that week. That works especially well for the poorest people, many of whom live in government-subsidized rooming houses with no kitchens.

Some of the workers in these gardens earn a little money, even though they could likely not hold a 9 to 5 job. It’s an important green job supplement. Other gardens have been set up specifically to help recovering people heal. There is much more to these urban farms than just the economics and production.

Wes Regan is also part of the Urban Aqua-Farm Society. Are there really aquaculture operations in the city of Vancouver? No large ones yet. There are some experimental ponds and barrels.

Urban farming tends to focus on raising greens and other veggies. But if we want true self-sufficiency, we need proteins as well. Some of that can come from beans, but raising fish or other marine life in our cities could fill the protein gap.

Many of us picture urban farming as a pass-time for yuppies, people with money. We talk about urban farming as part of the solution to poverty. It is working in Detroit and many other U.S. cities as well, where empty housing was bull-dozed, and tractors are now at work.

Don’t hungry people, drunks, or vandals just steal the food or wreck the gardens? Wes can’t recall any such incident of vandalism. It seems just trying to cope with extreme poverty, the area has built up its own community rules and spirit. People support these gardens, and other guerilla planting.

Vancouver Mayor Gregor Robertson and his Council are supportive. They want to make Vancouver the “greenest city in the world”. How could we make the same case to less sympathetic municipal governments? Wes says a straight case of economics can be made, and explains how.

Regan co-authored the 2010 report “Advancing Urban Farming in Vancouver” which you can find here.

——————- That’s it for Radio Ecoshock this week. Find us on Facebook and you can share each and every program with your friends. We need to get the word out fast to save what is left of the natural system. You can help. Feel free to download our show from the web site ecoshock.org Pass them around as mp3’s or CDs.

I’m Alex Smith. I appreciate the helpful emails, tips, and links sent in by listeners. Just click on the “Contact” button on our web page to send your message. Thank you for listening and caring about our world.