Can We Count on Catastrophe? (Replay)

With radio producers Eddie Yuen & Sasha Lilley. Why do humans fixate on catastrophe, real or imaginary? Does the nation, the economy, or civilization need to collapse- to start anew? Who benefits if we think like that, and would things get better or worse? 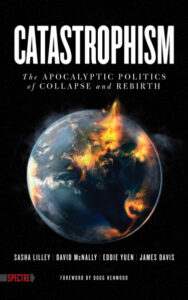 Why bring that back now? Three reasons: some listeners suggest I’m too fixated on collapse, at the expense of solutions. Meanwhile, we have ample public fears of collapse during pandemic, war, and unstable economic conditions.  There are signs more people are afraid something awful is about to happen, or already happening behind the scenes. Not to mention the science of the rapidly developing climate catastrophe, which is all too real.

I’ve reached out to one of the authors, Eddie Yuen. Eddie teaches in the Urban Studies Department at the San Francisco Art Institute. He is the co-editor, of the book “Confronting Capitalism: Dispatches from a Global Movement.” He’s written about popular movements, the politics of Right and Left, and the role of apocalypse in environmentalism.  Along with Sasha Lilley, another author in the book, Eddie has been a radio producer for “Against the Grain” on KPFA, the Pacifica flagship station in Berkeley and the Bay area.

FULL BLOG WITH ALL THE LINKS HERE: