That’s right. Russian tanks fired on Europe’s largest nuclear power site. The Zaporizhzhia nuclear power plant has 6 reactors, three of them running at the time of the attack in the dark of night in Enerhodar, south-east Ukraine. A fire erupted in an administrative building. It burned for hours while fire-fighters were prevented from responding by live fire. 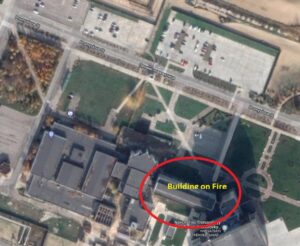 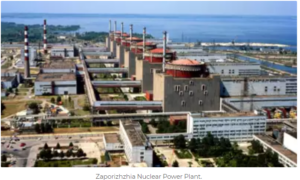 Earlier in the day, photos showed crowds of unarmed Ukrainians, including plant operators, blocking the road to the power complex against Russian armored vehicles. The Russian army came anyway. No one was killed. Eventually the fire was put out, no reactors were damaged. Staff managed emergency shut down. Europe, Russia and the world were spared being sprayed by deadly radioactivity for a second time, since the Chernobyl reactor explosion in the Ukraine in 1986. This unspeakable brush with disaster is actually far smaller than global climate change, which continues to build. In our second half hour, we speak with an author for the Second big report from the Intergovernmental Panel on Climate Change. This time the admit scientists greatly underestimated the speed and damage of global warming. In fact, a survey of scientists expect Earth will rocket up past 3 degrees C. warning this century. Nobody really wants to talk about what that means. Stay tuned for my interview with Dr. Timon McPhearson.

Since the Chernobyl disaster, and the quadruple reactor meltdowns at Fukushima Japan, the world went back to sleep. French President Emmanuel Macron reversed policy, announcing plans for 12 new reactors, this time to save the climate. Despite Three Mile Island and a hundred near-misses since, the Biden Administration also announced plans for a new nuclear reactor building binge. Desperate Greens like Stuart Brand, James Hansen, and Mark Lynas are all pushing nuclear as the climate answer.

Nuclear power could be a possible energy source for an intelligent species. Sadly, as we see again this week in Ukraine, humans are not that species. We can and do break out into violent mass madness on a regular basis. We are too unstable for nuclear technology.

Always on the ball, Maria Gilardin of TUC radio found activists who warned about high nuclear dangers in the Ukraine war, a week before this latest incident. As they explain, extreme risk continues. For example, if the Russians decide to turn off the power to major cities as part of their seige for conquest, the lack of load balance could put all of Ukraine’s remaining reactors into emergency backup mode. When power lines are destroyed by war, nuclear plants depend on backup generators and continuous truckloads of diesel fuel. Without that, they overheat and explode, exactly as the four reactors in Fukushima Japan did. We go now to TUC Radio, Time of Useful Consciousness.

DESCRIPTION OF THIS INTERVIEW FROM MARIA GILARDIN

Ukraine is on the Brink of a Nuclear Catastrophe
Linda Pentz Gunter and Dr. Ira Helfand

QUOTE: “We are in an unprecedented situation. For the first time a war
is being fought in a region where there are operating nuclear reactors.
This presents an extreme risk to human life unlike anything we have seen
in previous wars.” That’s a statement from Beyond Nuclear, of Feb. 25, 2022.

For a relatively small country the nuclear statistics are impressive: Ukraine operates 15 reactors, ranking 7th in the world in 2020. The
single largest nuclear power plant in Europe is in Ukraine. Ukraine’s power sector is the twelfth-largest in the world in terms of installed
capacity. 54 gigawatts are providing over 50% of Ukraine’s electricity.

Linda Pentz Gunter presents a list of 6 catastrophes that can befall a nuclear power plant – from taking a direct intentional or accidental
missile strike to the collapse of the grid to operating personnel being unable or unwilling to come to work.

Dr. Ira Helfand is part of the International Campaign to Abolish Nuclear Weapon (ICAN). Helfand also is a co-Founder and past President of Physicians for Social Responsibility. He describes the consequences of nuclear strikes on major cities.

He and Linda Pentz Gunter participated in a Zoom meeting on the topic of War in Eastern Europe: On the Brink of a Humanitarian Disaster. They met on February 19, 2022.

My thanks to Maria at TUC Radio. Find all her past programs at tucradio.org. Remember, as Helen Caldicott wrote in her book: “Nuclear Power Is Not the Answer to Global Warming or Anything Else”.

A huge new report warns of terrible impacts as the climate shifts. Some are permanent. From 67 countries, 270 research scientists worked through masses of measurements, models, and mountains of data. They can now see the who, what, and where changing the world’s climate will strike. This report is need-to know: “Climate Change 2022: Impacts, Adaptation and Vulnerability”. It is from The Intergovernmental Panel on Climate Change, the IPCC. I posted links to access this free report below.

No single human can comprehend this shift from “normal to extremes”. Here is one starting point: half of humanity now live in cities. So we enter this major summary from Working Group II with an expert on urban ecology, including climate change and cities. Timon McPhearson is Professor of Urban Ecology & Director of the Urban Systems Lab, at The New School in New York City. He publishes articles in top scientific journals, helps edit the Nature journal “Urban Sustainability“. You may have read his work in The New York Times or the Guardian. 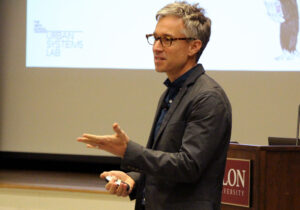 The top scientific journal Nature just published a summary article by Jeff Tollefson. He says: “Top climate scientists are sceptical that nations will rein in global warming”. In fact, Timon tells us, a survey of scientists found most expect Earth with will experience over 3 degrees C warming over pre-industrial – by the year 2100! This is based on three things: (1) the low goal set by countries for reductions under the Paris agreement; (2) a better understanding of new science, in particular quantifying rapid ice loss at the poles; and (3) the rapid appearance of changes and feedbacks not expected until much later but happening already.

This latest grand survey of science looks at the risks, vulnerability and impacts of rapid climate change. U.N. Secretary General António Guterres called this IPCC report an “atlas of suffering”. The New York Times headline about this report: “Climate Change Is Harming the Planet Faster Than We Can Adapt, U.N. Warns”.

To me, the results sound like the end of civilization, if not a planet with humans on it. Who would guess that would be second billing on Radio Ecoshock? But to get to the next decade, we have to survive this one. That includes the fires, droughts, storms, floods, and mass migrations we can expect from climate change this year, and every year, from now on.

“The facts are undeniable. This abdication of leadership is criminal. The world’s biggest polluters are guilty of arson of our only home,” – UN Secretary General Antonio Guterres

Yes the world has gone crazy. Take some comfort knowing that happened all through history during and after pandemics. In the Middle Ages Europeans murdered more Jews and women, as Witches. Wars during and after pandemics are common. So if you are feeling unbalanced, this is a mass social phenomenon. Don’t take it personally. Remember to spend time out under the sky. Listen to the land, which has seen it all before. Take time away from the screens to find your inner self.

I’m Alex Smith. Thank you for listening again this week, and caring about our world, as painful as that can be.

Oil Terrorism In Turbulent Times →
← Can We Count on Catastrophe? (Replay)
2 Comments