Climate Talk on the Brink

Telling it like it is, here is the Secretary General of the United Nations. On November 21st, 2021, Antonio Guterres gives his short stern welcome delegates at the COP26 climate conference in Glasgow Scotland. The transcript is here.

As the world as-we-know-it hangs in the balance, there is a galaxy of science, reports, warnings, plans, promises, and protests coming out the Scotland climate conference. We start with the fastest 8 minute briefing ever on the 10 key points you need to understand about what new science is telling us. This from is the esteemed Swedish Professor, climate scientist, and Director of the Potsdam Institute, Stefan Rockstrom at the COP.

During that fast roundup of new climate science – from the latest Intergovernmental Panel report – you hear Professor Rockstrom bring up the threat of cascading tipping points. I covered that last week on Radio Ecoshock with the lead author from the Potsdam Institute, Dr. Nico Wunderling. Find that free audio interview here.

Later in this program I alert you to one of the scariest warnings yet for everyone who lives in cities, where more than half the population on Earth live. If there is time, I will also dig into why a respectable teacher and climate Tweeter could wonder if the population of India could only be 200 million people by 2070. That comes from more shocking news released at COP26.

On a late evening in Glasgow, in the first week of the conference, we hear from Canadian climate scientist Paul Beckwith. Paul is at the COP, getting his daily COVID test. Beckwith set up multiple science briefings in the U.N. press briefing room for NGO’s.

During COP16, Paul took advantage of the U.N. press room for non-profits. Some of the groups who booked time in advance did not show up, possibly due to COVID-19 travel complications. For example, the well-known Berkely group BEST, Berkeley Earth Surface Temperatures did not show for their presentation. So Paul was able to add a few sessions to his planned briefings. These included:

* his presentation with Dr. Peter Wadhams (by video), Regina Valdez and Stephen Salter (by video) on marine cloud brightening. This has been a constant theme with Paul, namely that humans must somehow cool the Arctic, to prevent a total loss of sea ice. Otherwise Earth’s energy balance will tip too far for survival in many parts of the world. Stephen Salter is probably the world’s best-known authority on creating clouds by spraying sea water. Salter already presented a plan to do his from automated ships (no crew). As they are spraying ocean particles, it is the most natural approach. The YouTube video of that event here.

* a presentation at COP26 NGO Press room on living in an extreme climate casino. In my view, this is a key vision from Paul which explains the seemingly random hits of extreme weather all over the world. Think of the fires that burned the Kangaroos and Koalas in Australia. The Canadian town of Lytton that burned after 49 degree C. heat. Lake Charles Louisiana hit by two hurricanes in a row. The weird floods in Northern Europe and North China. Extreme climate-driven weather can strike anywhere in the world, from pole to pole. It is just a matter of luck whether that is YOUR community. Welcome to the casino. See this earlier video with Paul explaining “Why we all live in a Climate Casino”.

Meanwhile, Paul tells us he went into an actual casino to get some background film for a planned video on the topic. Ever the scientist, Paul carries a tool with him to measure atmospheric gases, radioactivity, and toxic materials. He found a casino in Scotland has lower CO2 than the street outside. There have been media suggestions casinos pump in extra oxygen to keep gamblers going. Hopefully they are now filtering the air to keep COVID down as well.

Some people who go to the COP meetings speak of the benefits of people you meet in side-rooms. Sure Paul was in the company of scientists like Jason Box and Kevin Anderson. But he also met with three aboriginal women from Australia. They spoke of the damage to their living lands caused by fracking for natural gas. Gas was sold as some kind of “greener” bridge to the future, but those fracking wells leave open sores on the land, with lots of emissions of bad gases and use of extremely toxic chemicals that end up who-knows-where.

I refer Paul – and you – to my shows on fracking, like “Transition Through A Fracked Climate” May 16, 2018 with Professor Anthony Ingraffea from Cornell.

Transition Through A Fracked Climate

* Paul also discusses the work of Peter Fiekowsky and climate restoration. You can watch a video of Fiekowsky, Peter Wadhams and more here.

One of the big questions is: how could we respond to a burst of methane from the Arctic? Paul says he does not expect a single event burst of 50 gigs of methane (leading to a sudden warming of the planet). Instead increasing amounts of methane can blow out, like the craters found in Siberia, either on land or the sea floor. That methane would be added to a growing stream coming from the millions of ponds forming over a thawing permafrost.

Here is a good video from Peter Fiekowsky and the Healthy Climate Alliance on “reversing climate change”.

Like the majority of people on this planet, most of you live in cities. That’s why you need to tune into a new report from the United Nations, released November 3rd at COP26. The title is: “Beating the Heat: A Sustainable Cooling Handbook for Cities”. You can download that report for free. 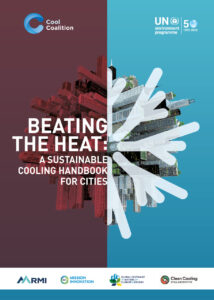 But listen to this, from the introduction to that handbook, quote:

“The world’s cities are heating up at twice the global average rate due to rapid urbanization and the urban heat island effect. By 2100, cities across the world could warm as much as 4.4 degrees Celsius (°C) on average – more than double the Paris Agreement’s goal of limiting global temperature rise to no more than 1.5°C.

Hotter cities could be catastrophic for public health. If the current trends in urbanization and increasing heat continue, it is expected that the urban population exposed to high temperatures – that is, average summertime highs above 35 deg. C – will increase 800 per cent to reach 1.6 billion by mid-century.”

“The challenge is compounded by the fact that the impacts of urban heat are not evenly distributed.

Lower-income districts within a city are often hot spots due to a lack of green spaces and to the co-location of industrial operations, and residents of these areas are also less likely to be able to afford or access cooling for thermal comfort. These communities are usually the most vulnerable to heat, disproportionately bearing the negative impacts of excess warming.

In the absence of focused policy and market-based interventions, market behaviour defaults to an increasing number of people relying on air conditioners to address rising heat. Already, 2.3 billion people in the increasingly affluent lower-middle class in developing countries are on the verge of purchasing an entry-level air conditioner – typically the unit that is the most affordable, and likely the least efficient, on the market.

This can be a quick and localized fix for those who can afford it, but it comes with severe consequences, where the emissions and waste heat from cooling perpetuate a vicious cycle where mechanical cooling is further warming our cities, necessitating even more cooling and further compounding the equity divide for those who are unable to afford access.”

That is from the Executive Summary to the “Sustainable Cooling Handbook for Cities”. In addition to UNEP, the report comes from the Cool Coalition, RMI [the Rocky Mountain Institute], the Global Covenant of Mayors for Climate & Energy (GCoM), Mission Innovation and Clean Cooling Collaborative.

The handbook shows pathways that can reduce urban heat up to 4 deg C. The solutions come mainly from city governments. The report gives examples of reclaiming a river in Seoul, South Korea, to the largest urban cooling system in the world. In Toronto Canada, cool water from the bottom of Lake Ontario cools commercial buildings. The handbook finds central cooling systems are the best answer compared to a million little inefficient AC units that blow more hot air into the streets. Central cooling was built into the Pearl River New City project in Guangzhou, China.

Cities have multiple opportunities to intervene to avoid mass heat deaths. It comes in planning new buildings, all zoning decisions, planting greenways, providing mass cooling wherever possible… One of the best discussions on how cities survive extreme heat comes from Dr. Mat Santamouris in my Radio Ecoshock show broadcast February 1st, 2018, and again just a couple of weeks ago. Find that free here at ecoshock.org.

But if cities warm 4.4 degrees C on average, above what people in 1950 or even 1990 experienced, that is horrendous. Because it is “average” that means some cities will go far beyond human heat tolerance – worse than the heat dome stretching from Portland to Vancouver Canada. The Coroner in British Columbia announced almost 600 people died from that extreme heat wave, with hundreds more in the United States, in just 3 days of hot, hot cities.

I know several people who moved this fall just because of that heat. It makes us wonder if cities will really be viable in the coming decades. Maybe the trend of millions moving to cities will reverse.

We are seeing maps showing large areas of the Earth will become uninhabitable by 2070 due to extreme climate change. On October 31st, the Financial Times published the article “Climate change could bring near-unlivable conditions for 3bn people, say scientists”. Sadly, the article is behind a paywall, but for a while the Times brief video map was on the Net – showing the coming unlivable hot spots on the planet. It does not include people displaced by rising seas, hurricanes or other disasters connected to the climate shift. We need the term “extirpation”. That means local extinction, when a species no longer survives in that area.

Large parts of North Africa are on the brink beyond human heat tolerance right now. But a vast part of the continent will be too hot by 2070. A rapidly increasing very young population is already on the move. They seem like economic migrants flooding into Europe or South Africa, but these are climate migrants too.

There are similar bands of human exclusion running across South America, including where the Amazon rainforest used to be. Hundreds of millions will move or die. Millions are already leaving storm-wrecked and drought-stricken Central America, going north. The trickle you see on TV has just started and will grow into rivers and torrents of people on the move – because we are not realistically fight the great heat emergency.

The most populated areas of India, containing up to a billion people, will be too hot for people and crops. Again, hundreds of millions will move or die. The projections are based on the paper “Future of the human climate niche” le by scientist Xu Chi. I covered this in my May 2020 show “Lethal Heat Warning” with co-author Professor Tim Lenton. That interview has been heavily downloaded.

That is enough and all we can stand for this week. I’m Alex Smith. Thank you for trying to understand the real climate challenge – and supporting Radio Ecoshock.