Climate Power for All

The Biden/Harris team just appointed Professor Shalanda Baker as Deputy Director for Energy Justice at the Department of Energy. Meet her first, here on Radio Ecoshock. We discuss Baker’s new book “Revolutionary Power – An Activist’s Guide to the Energy Transition”. Dr. Katharyn Duffy reveals a tipping point for plants – where they become a source of CO2. It is important science about imminent danger. Welcome to Radio Ecoshock.

Or you can watch the second interview (with Katharyn Duffy) as a YouTube video.

“The modern energy system is destiny. …The energy system reflects power. Yes, the system literally provides power, but the system itself represents the sum total of a series of political and economic choices that concentrate power and wealth in the hands of utility companies and their investors, often at the expense of utility customers.”

The climate crisis is starting to hit us all now. In this emergency, we don’t have time for a lot distractions. If you think we don’t have time for ideas like “energy justice” – you don’t know Shalanda Baker. Shalanda is a Law Professor at the Northeastern School of Law in Boston. But that is a pretty dull way to describe this voice powering up from single-parent poverty in Texas oil country. Shalanda helps indigenous people and people of color find power – not abstract power but the kind that keeps the lights on. She can help us all understand what needs to come next.

Shortly after this interview, I learned Shalanda Baker was just appointed by the Biden/Harris team as Deputy Director for Energy Justice at the Department of Energy. I thought they would want her. Now Ms. Baker will help implement Joe Biden’s commitment to put “40% of his historic investment in a clean energy revolution to disadvantaged communities.” You met Shalanda here first, here on Radio Ecoshock.

A publicist sent me a press release about the new book “Revolutionary Power – An Activist’s Guide to the Energy Transition”. This isn’t really my thing. As a well-meaning white male radio host, I felt intimidated by my own ignorance. I decided to duck. But then I read the book, learning we can be part of this movement to do green right. We start where Shalanda started, after she left a high-powered law firm, including her work in Tokyo. She helped set up big power projects, but then left looking for a calling. It came with a wind-power proposal in the southern Mexican state of Oaxaca. How could anyone object to wind power?

Shalanda and I consider some of the climate war zones, from Puerto Rico to California. But first, we need to address a barrier that might keep some listeners away. She devotes an entire chapter to “Climate Fundamentalism”.

Shalanda explains that in our interview. Here is one way I try to grasp it. Some people focus on the pandemic public health threat were against Black Lives Matter protests on health grounds. It could spread the disease. Why couldn’t African-Americans wait a year until or two until it was safe? Because they lived with the threat of police killing them every day. That is an immediate threat that cannot wait. The climate and energy transition like that. We have to do both at the same time, and in a coordinated, intertwined way.

In my opinion, climate justice is not a choice or a luxury if we truly want to save a livable climate. A minority with solar panels will fail if coal plants keep powering inner cities. The big environment groups, and the whole movement need to rethink the “climate first” and everything else after that mindset. The energy transition won’t work if the poorest people pay the biggest price, again. Like the virus, all go forward into a healthy life, or none do. Shalanda says it much better.

We also hear about attempts to get green power to the lesser known Hawaiian island of Molokai. With the highest electricity rates, on a low-income mostly indigenous population, Molokai struggles to get off diesel generators and into renewable power. 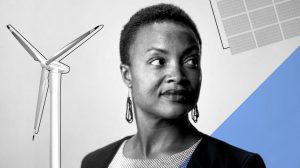 At least 100,000 Puerto Ricans fled to the U.S. mainland after two hurricanes knocked power out on the island in 2017. The electric grid stayed down for months in many areas. What can energy activists learn from that experience which began with hotter oceans powering up monster storms?

In most parts of Canada, electricity comes from publicly-owned utilities. That makes it harder to understand why Americans are so badly served by private power companies. But then I agree with Matthew Desmond in the New York Times 1619 Project: (quote) “In order to understand the brutality of American capitalism, you have to start on the plantation.” That history helps explain energy disparities today.

Shalanda also tells us about “Solar Segregation”, and how have vested interests used it against renewable energy. The big power companies complain that home solar is pushing operating costs back to poorer consumers who can’t get solar. So we should tax solar, or ban it or something. Of course these giant companies steered billions in profits to shareholders – gathered in most cases from a captive power market that reaches into the poorest people. They want Capitalism without rules, until they suddenly want lots of market intervention from government to protect their investments.

Their is a much better way: “energy democracy”. According to Baker’s book: “There are various concepts of Energy Democracy. One early concept has been published by the Berlin-based group gegenstrom 2012. The thesis paper calls for “a 100% transition to renewable energy as quick as possible” and a reform of ownership of energy production… “ [“Gegenstrom” can translate to “against the tide” or “countercurrent”.]

“The concept inspired the German climate camps in 2011, as a collection of theses and arguments. The 2012 climate camp Lausitzcamp in Lusatia published a short summary of the concept: ‘Energy Democracy means ensuring that everyone has access to enough energy. However, the energy must be produced in a way that it neither harms nor endangers the environmental or people. Concretely, this means leaving fossil fuels in the ground, socializing and democratizing the means of production and changing our attitude towards energy consumption.’”

“We sought out to constrain the temperature dependence of global land carbon uptake, and in doing so realized that we had begun to exceed this threshold over the last & warmest decade on record due to climate change.”

– Katharyn Duffy, “How close are we to the temperature tipping point of the terrestrial biosphere?” 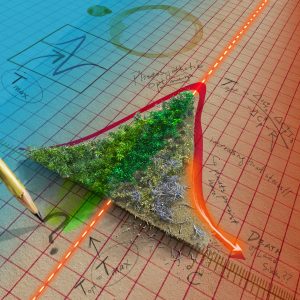 The second interview this week carries disturbing news: the plant world cannot capture our emissions as the world heats up. The tipping point may be only a couple of decades away. It is already happening in the Arctic.

As we heat up the planet with more greenhouse gases, everyone talks about a natural solution: protect world forests, plant billions more trees and use agriculture to capture carbon. New science questions that. A January paper published in the journal Science Advances warns: “The temperature tipping point of the terrestrial biosphere lies not at the end of the century or beyond, but within the next 20 to 30 years.”

OR watch the YouTube version of this interview with Katharyn Duffy (and pass it on to your friends with this link: https://youtu.be/Yi6zFY7tMn8 ).

Anyone can read this new paper titled “How close are we to the temperature tipping point of the terrestrial biosphere?” It is available free. The paper is based on observations, not modeling. They use measurements from the largest continuous carbon monitoring network, FLUXNET.

Katharyn is also a specialist in “phenology” – the timing of biological life cycles. The USA National Phenology Network is now begging for funds to keep going.

I operate an experimental geothermal greenhouse in southern Canada. Most of my plants begin to grow vigorously around 65 degrees Fahrenheit, or 18 degrees Celsius. Around 95 degrees [35 C], most growth stops. The plants are just protecting themselves during the heat. Katharyn tells me this matches well with limits found by scientists.

Key questions Duffy’s new paper investigates: “At what global and regional temperatures do we expect the land sink of carbon to decline?” and “Are those temperatures [where land sinks become carbon sources] in the foreseeable future?” 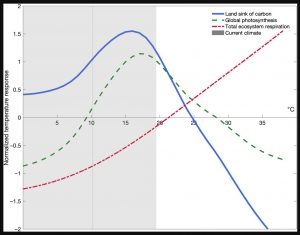 People who want to minimize global warming, including some paid by fossil fuel interests, promised us the extra carbon dioxide in the atmosphere was great for plant growth, so no worries. Katharyn answers that more carbon dioxide “food” for plants will not help when they are shutting down photosynthesis in high temperatures.

As a gardener, I picture carbon loss from overheated plants in two stages. If we have a month of too-hot-to-grow weather, we lose the carbon dioxide that might have been used in photosynthesis except that plants closed down in self-defense. That is one calculation. Then if the plants die in the heat, they release all their carbon, either to the air or the soil.

A number of other scientists predict plant life in the ocean, mainly plankton, will also turn from an engine capturing carbon to a net source of even more CO2 into the atmosphere. In a Tweet Katharyn said “When the ocean’s ability to absorb heat stalls/declines atmospheric loading will feed into a whole host of land surface climate feedbacks.”

The new results also affect proposals from scientists like Thomas Crowther of ETH Zurich – to plant billions more trees as a partial solution for climate change. That may not work if plants cannot grow well in a hotter climate.

Big countries like Canada and Brazil already count their large forests as part of their climate goals. If those forests become sources instead of sinks, it is a whole different picture for international climate negotiations and for the real future arriving.

The Duffy-led paper in Science Advances discusses, quote “documented episodes of rapid release of carbon to the atmosphere during high temperature extremes”. One cited example is the paper by P. Ciais on the European heat wave of 2003. Plant productivity fell significantly during that heat wave. We need to be concerned when it gets too hot for crops. I think of the Russian heat wave of 2010 when they lost half their wheat and shut down exports.

IS THIS PLANT/CARBON TIPPING POINT COMING RIGHT UP?

“We show that the mean temperature of the warmest quarter (3-month period) passed the thermal maximum for photosynthesis during the past decade. At higher temperatures, respiration rates continue to rise in contrast to sharply declining rates of photosynthesis. Under business-as-usual emissions, this divergence elicits a near halving of the land sink strength by as early as 2040.” 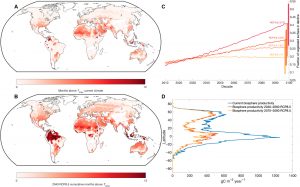 Not everywhere in the world will experience temperatures above the limits of plants. Large parts of China and the southern parts of Africa do not. By mid-century, some large regions escape extreme temperatures affecting agriculture and wildlife. Warming is uneven and unfair. The places that get the most destructive heat, in terms of carbon storage or release, are in countries that emit the lowest emissions, like the Amazon and North Africa.

Congratulations for making time for news from planet Earth! My special thanks to all the subscribers and donor who make this weekly radio show, blog and podcast happen. If you can afford to help, check this out.

Please join me for Radio Ecoshock again next week.