Think of the great cities about to be lost as seas rise on a warming planet. That is Venice, and our guests Gray Brechin and Luca Muscara take us there, to the battleground between human history and climate change. But we go further into the killing role of great cities and lessons for our future from the New Deal. I’m Alex Smith. Let’s explore time and place on Radio Ecoshock.

I’m going to call Gray Brechin an American public intellectual. His best-selling book “Imperial San Francisco” is still read and studied 20 years later. Gray appears often on television and radio. Right now Dr. Brechin is a visiting scholar with the U.C. Berkeley Department of Geography. He is also the founder of an important project called the Living New Deal. We have to talk about that.

Gray’s work began to flow toward his best known book partly following inspiration in Venice. He tells me “Venice changed my life profoundly when I got to spend a winter there in 1985 and really began to think about the environmental cost of cities in general which became my doctoral dissertation and book, Imperial San Francisco: Urban Power, Earthly Ruin.” 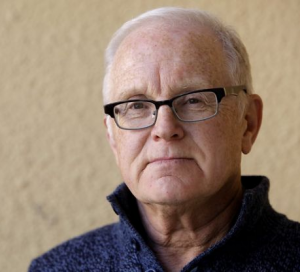 Gray will be presenting a new talk “Imperial San Francisco At 20: More Relevant Than Ever” at the The Mechanics’ Institute in November.

FANTASIES OF THE NEWS

In one sense, San Francisco acted as an imperial city – by sending it’s new wealth from mining and media to New York. Newspaper magnate William Randolph Hearst was the original Rupert Murdoch. Randolph Hearst didn’t invent “fake news”. There was plenty of propaganda and outright fantasy in news reporting in the 1800s. It was called “Yellow Journalism”, but Hearst’s papers took politicized fake news to new levels and a national audience.

But even without intentionally dishonest news, isn’t the so-called mainstream media also built upon violent fantasies and protection of domination?

Few original San Franciscans can afford to live there, or resist cashing out during high prices. It seems both San Francisco and Venice are being hollowed out of actual local people. Wealthy people from all over the world buy in San Fran, as they do extra apartments and big empty houses in Vancouver and London. They become like zombie cities that have lost their soul? But Gray questions whether cities have souls.

All the mega-city is a heat engine, a massive sprawling smokestack for greenhouse gases. From the freeways to coal-powered air-conditioning to concrete – it all flows upward unseen into a wrecked future. Even if mega-cities were not fountains of greenhouse gases, do you think the super-city – just the magalopolis itself expanding outward – kills off the surrounding environment. Is that alone enough to crash our civilization? Brechin thinks it is.

In the introduction to “Imperial San Francisco” Gray writes: “Recent archaeological evidence has supported Lewis Mumford’s contention that war and the city were born together“. We talk about that.

For a long time, Gray has spoken out about the dangers of militarism and wars of empire. In last week’s Radio Ecoshock show, Australian scientist Andrew Glikson lamented the trillions needed to convert our civilization – and maybe saving a habitable climate – are spent on the military and the next war. Is it possible our mania and spending on war alone could prevent us from really solving the climate crisis?

THE FIRST “NEW DEAL” CAN HELP US AGAIN

Huge crowds of young people are rebelling against climate extinction. They have been promised a “Green New Deal” for 11 years. Opponents say a Green New Deal isn’t possible and government planning is always evil. This is partly what caused Gray Brechin to create the Living New Deal Project. But he was also looking for good news in our past ability to act together – to help his own sanity in the face of our rush toward catastrophe.

I think we need citizens to document their surroundings, so we can remember changes. Things change so fast we lose our memory. Or is it because the machine and the media compete to replace our memory with something that benefits the oligarchy?

Gray Brechin chronicles, literally from the San Francisco Chronicle newspaper “the murder of the public sector” – which is going on every day. Thee are signs and victims of that war against the public good. We privatize things and then make them too expensive for the common person.

Brechin is creating a new memory bank, with maps of what can be done when a government and a people are ready to be doers. His map of New Deal accomplishments shows the basis of American highways, power systems, public buildings, refurbished National Parks and so much more. Maybe President Roosevelt’s New Deal from 90 years ago can help America with the Green New Deal she needs so badly now.

I encourage people to visit the interactive map of more than 15,000 sites across America built by the New Deal. Find it at livingnewdeal.org. And check out Gray’s master work “Imperial San Francisco: Urban Power, Earthly Ruin”.

LUCA MUSCARA ON HIS BELOVED VENICE

In the age of rising seas, is it time to say “goodbye” to Venice? I reached out to an Italian scholar, published on Venice, educated there, and a known lover of this world-renowned city.

Dr. Luca Muscara is Professor of Geography, and Associate Professor of Political Geography at the University of Molise. Also known as UNIMOL, this great Italian university is located in Campobasso Italy. But we reached Dr. Muscara on assignment in Grenoble France. 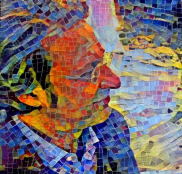 Monday 4 November is the 53rd anniversary of the catastrophic flooding Venice in 1966. Waters in the city reached almost 2 meters (6.5 feet and lasted for 2 days. You can see it in this archival You tube video.

Looking through Luca’s previous articles, I found several Venices. There were Venetians, invaded by tourists, then bought out by international wealth. Actual Venetians have been fleeing the city core for decades, being now about one third of the previous population.

But Muscara says the tourists are unfazed. They even like the thrill of putting on boots and climbing around temporary boardwalks! Yet the city is far from finished. Muscara’s oceanographer friends says Venice should be OK for another 30 years at current sea level increases. Personally, I think that is very optimistic, especially given the latest research. I hope to cover some of that in an upcoming show.

DEFENDING VENICE AGAINST THE SEA

Of course the city is trying to defend itself. Several decades ago Venice drew up plans for protective storm surge gates on the three main entrances to the port. It is called the MOSE. Great walls would rise from the sea bottom to close up the harbor during storm surge events. The project was slowed by corruption, and one part of it may be tested as soon as next year.

However, just like the Thames storm surges gates protecting London, the whole design did not take into account rapid sea level rise. There is general agreement even the new gates, if they work in Venice, will be over-topped by the end of this century. It’s a stall at best. Meanwhile, the city is defenceless against the next big storm surge.

SO MUCH TO LOSE

So what are we talking about? One of the great and most beautiful cities in the world could go underwater with all those treasures lost. It would be very sad. But we will hear that story all over the coasts of the world – because we cannot seem to reduce our greenhouse gas emissions.

“Our world would be way poorer without Venice. Not only it is a unique case of a largely Medieval city which has remained intact in its entirety. It is also one of the last examples of a pre-industrial way of life still with all its magnificent buildings. One can still leave mostly in the pre-industrial age here, with a different sense of time. It is still one of the greatest examples of ecological balance between the environment and humankind.”

I wonder what will happen to famous half-submerged cities around the world, not just in Europe or America, but in Asia. It would be strange to be born into an age where wave-damaged buildings stand in the sea.

It is hard for me to believe that people will just let famous landmarks go under – and keep on driving gasoline cars. But if nature takes control of the climate shift, then we become like the legendary English King Canute. With flood control systems and sea walls we try to order the ocean back to it’s former boundaries. But can we stop rising seas now really?

Luca is also the biographer for French Geographer Jean Gottmann. Regarding Gottmann’s system, he writes “Territory is a ‘psychosomatic phenomenon’ and its partitioning takes place first of all in ‘people’s minds’ and subsequently in geographic space.” That is a mind-blowing rethink. We briefly branch into that during this interview, along with Jean Gottmann’s vision of “megalopolis“.

We have been talking with Italian scholar Luca Muscara. He is with the University of Molise, but has taught at other universities, and consulted for industry and the United Nations. His book with John Agnew “Making Political Geography” is a standard around the world.

This has been part of our on-going exploration of our time in climate change. Just search for “Radio Ecoshock” and “rising seas” to find more great programs – all available for free listening or download right from this web site.

There have been rumors and suppositions the American military knows climate change is an existential threat to their operations, and to all of us. This summer, the U.S. Army released a counter-point to President Trump’s climate denial. It’s called “Implications of Climate Change for the U.S. Army“, published by the United States Army War College and instigated from the top, by Trump’s appointed chairman of the Joint Chiefs of Staff General Mark Milley.

I found the conclusions of this Army report remarkable and really useful not only to climate, but to those who try to be prepared for an unstable future. The elite army authors write:

“It is useful to remind ourselves regularly of the capacity of human beings to persist in stupid beliefs in the face of significant, contradictory evidence.”

My friend Jim – and unlike some people, my friend Jim in Texas is not imaginary – Jim writes of this Army paper:

“The Army seems to be a master of understatement. It seems to be surprisingly self-aware. These are my favorite quotes from the paper:

‘The Army has thrived despite a culture of environmental oblivion that exists within the force….‘

‘The Army is not an environmentally friendly organization….’

‘In short, the Army is an environmental disaster…‘ No kidding! says Jim.

But this is not just the American army, but all armies of all countries in the world. We waste money on weapons to kill one another, blowing huge clouds of pointless carbon into the sky from ships, tanks, rockets and planes, while the climate emergency marches in to kill us all. We need to turn that around quickly.

Here is a link to that Army paper, and a good article about it by Nafeez Ahmed published by Vice on October 24, 2019.

I’m Alex Smith. Thank you for listening again this week, and caring about our world. Please help me keep producing this program – and making it available free all over the world – with your donation large or small to Radio Ecoshock.