At the Edge of the Great Dying

At least a million forms of life are hovering at the edge of extinction, as humans take over the world. Lead author Sandra Diaz on the shocking new U.N. report. Then Columbia/NASA scientist Kate Marvel explains “hyroclimate” as rains and droughts go extreme. Alex updates four concurrent heat waves striking from the Arctic to India.

How did we get into the position of trying to persuade city-dwelling humans we still need nature? And how can we describe the speed at which life is disappearing? All that is in a stunning new report from the United Nations. Dr. Sandra Diaz is lead author of this report that is taking the world by storm: “The IPBES Global Assessment Report on Biodiversity and Ecosystem Services”. That is where we discover on-going human damage to other living things is as great a threat as climate change.

The scientific work of Sandra Diaz is decorated with many awards. She is one of the most cited environmental scientists in the world, with over 300 peer-reviewed papers. Diaz works from the University of Cordoba in Argentina, her home base. 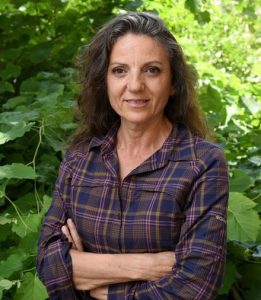 We should be shocked by this massive new report coming from The Intergovernmental Science-Policy Platform on Biodiversity and Ecosystem Services, the IPBES. It almost sounds like humans are driving toward a kind of agricultural planet where “unnecessary” life forms are driven out. But scientists or industrialists have not managed to construct a careful ladder of species we depend on, so we can confidently judge which species are “disposable” as we take over everything.

You can follow up with this IPBES report, led by Sandra Diaz “Assessing Nature’s Contributions to People“.

We don’t know what species critical to our survival might disappear. We barely know what species are here on this planet (many are still unknown to us). Just consider the chain of bacteria necessary in our soil for food, and in our gut, to process food. We are not independent of the great chain of life.

“Biodiversity and nature’s contributions to people are our common heritage and humanity’s most important life-supporting ‘safety net’. But our safety net is stretched almost to breaking point,” said Prof. Sandra Díaz.

THE CRITICAL ROLE OF INDIGENOUS PEOPLE

In North America and Europe, there have been tendencies to romanticize indigenous people as the true keepers of nature. But the upcoming report from IPBES shows this is really true in many parts of the world.

According to the IPBES report:

“At least a quarter of the global land area is traditionally owned, managed, used or occupied by Indigenous Peoples. These areas include approximately 35% of the area that is formally protected, and approximately 35% of all remaining terrestrial areas with very low human intervention.

Even if we did not have greenhouse gas emissions, the new IPBES report shows nature would still be severely threatened.

KEY STATISTICS AND FACTS FROM THE REPORT:

47%: reduction in global indicators of ecosystem extent and condition against their estimated natural baselines, with many continuing to decline by at least 4% per decade

28%: global land area held and/or managed by Indigenous Peoples, including >40% of formally protected areas and 37% of all remaining terrestrial areas with very low human intervention

+/-60 billion: tons of renewable and non-renewable resources extracted globally each year, up nearly 100% since 1980

15%: increase in global per capita consumption of materials since 1980

>85%: of wetlands present in 1700 had been lost by 2000 – loss of wetlands is currently three times faster, in percentage terms, than forest loss.

Species, Populations and Varieties of Plants and Animals

Tens to hundreds of times: the extent to which the current rate of global species extinction is higher compared to average over the last 10 million years, and the rate is accelerating

Up to 1 million: species threatened with extinction, many within decades

The BBC reports on these new findings here. You can also learn a lot from the launch video here, including a presentation by our guest Sandra Diaz. (Despite poor audio quality at beginning if this video, the main authors’ speech is clear,)

UN Secretary-General Antonio Guterres in New Zealand said the political will to fight climate change has faded at the same time as it is getting worse for those feeling its effects. I think the same can be said about all the wonderful living species on this planet.

Let us be brutally honest about where the human species seems to want to go. We may desire a planet entirely designed for us. Every available space will be tailored to either produce food for us, to give us pleasure (like beautiful flowers), or to keep our mountains of waste out of site. There will be nothing to annoy us, like mosquitoes or poisonous snakes. That is a suicidal dream, given the real planet we inhabit.

So far, all that has been released is a summary for “policy-makers”. But right now, in America, Brazil, and many other countries, there are no environmental policy-makers, but rather policy breakers. We are sliding backward rather than going forward.

The full report, over 1,000 pages, will be released later this summer. But even the executive summary has so many stunning statistics you should read.

I am worried the very frightening message in this big report may be lost in three things:

1. the sheer size of the view and masses of numbers

2. the proper bureaucratic and scientific language of delivery

3. the seemingly obligatory need to stress optimism, or at least to deflect panic and despair. Sandra Diaz says “the battle is not lost”. But we must say “we are losing” at this point.

Human expansion on Earth reminds me of algae in a pond. Algae can expand until it runs out of oxygen and then crashes. Is there a crash point for humans and are we nearing it?

When it comes to your food, it’s all about moisture in the soil when crops need it. That is changing as the Earth warms, according to new science published in the journal Nature. When we load up the atmosphere with carbon-based power, we get more drought and worse floods.

Our guest is the lead author of the new study “Twentieth-century hydroclimate changes consistent with human influence“. Kate Marvel is with Columbia University and an Associate Research Scientist at NASA Goddard Institute for Space Studies. Following her PhD in physics at Cambridge, Kate investigated climate and energy at top research institutions like Stanford, Carnegie, and Lawrence Livermore National Laboratory. Kate is a communicator on various science shows, and has a regular column “Hot Planet” in Scientific American. 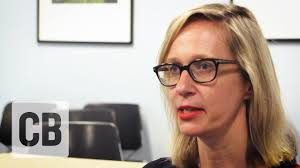 The press release from Columbia University sums it up:

“In an unusual new study, scientists say they have detected the fingerprint of human-driven global warming on patterns of drought and moisture across the world as far back as 1900. Rising temperatures are well documented back at least that far, but this is the first time researchers have identified resulting long-term global effects on the water supplies that feed crops and cities. Among the observations, the researchers documented drying of soils across much of populous North America, central America, Eurasia and the Mediterranean. Other areas, including the Indian subcontinent, have become wetter. They say the trends will continue, with severe consequences for humans. The study appears this week in the leading journal Nature.”

You can follow Kate Marvel’s work at her web site here.

In my May 1st Radio Ecoshock program, we investigated a strange heat phenomenon arising since just 2010. Swiss scientist Martha Vogel told us about multiple heat waves popping up on different continents at the same time. That is new in the instrumental record since the 1800’s, and eventually it could show up in two or more major food producing areas, creating food shortages, famine in some places, riots, or high prices at the grocery store.

It just happened again! First we had strange heat in the Pacific Northwest. The weather went from coldish winter-like conditions up to 88 degrees Fahrenheit, 31 degrees C in early May. We had to dig out our summer clothes all of a sudden and it went on for weeks. Fire season started early.

During the same first week of May, temperatures in Europe soared. Heat from Africa crosses the Mediterranean, again going above 30 degrees C, 80 something Fahrenheit, in Spain, Portugal, Italy and places north. Even England and Scotland were hot, with people enjoying a trip to the beaches or planting out early.

On May 11th, part of the Russian coast on the Arctic Sea reached 84.2 degrees F, a fantastic 28 Centigrade. The whole Arctic was roasting with wildly abnormal high temperatures, and that is continuing in a band across the Arctic. As a result, the Jet Stream is distorted, flinging storms from California, where the mountains received May snow, to endless soaking rain in Houston and a stream of tornadoes and thunder storms right up the American East. Seen on the global satellite maps, it looks like the cold was pushed out of the Arctic into the so-called temperate zones. 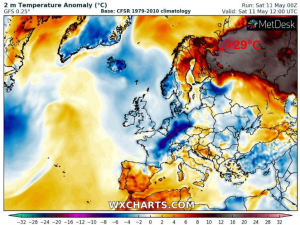 So we have heat waves in the Northwest, the Mediterranean, and the Arctic, but a fourth heat wave appeared also on May 11th. Just following the deadly Tropical Cyclone Fani in the Bay of Bengal, India and Bangladesh were trapped in insufferable heat. As people struggled to recover, or find any remaining shelter along the coastal towns and villages, both residents and aid workers sweltered through temperatures near 38 C (100 F) at the coast and 40-43 C (104-110 F) inland.

Humans tend to live with in the weather bubble around them. As far as I know, there is no global weather reporting, where people keep track of mega-trends like hemispheric disturbances, polar outflows, and multiple concurrent heat waves. Canadian You tube scientist Paul Beckwith and video blogger Robert Scribbler are about as close as we come to that, but we need at least one new institution, and new media approaches, to reflect rapid climate changes in this world of ours.

I’ve just received the book “The End of Ice” from another world-watcher, journalist Dahr Jamail. He will be our guest in next week’s Radio Ecoshock show.

My thanks to all my email corespondents. I could not do this program without your news tips and financial support. Thank you for listening again this week, and caring about our world.