Indie-journalist and author of “The End of Ice” Dahr Jamail covers the climate threats and how to cope – with host Alex Smith. From the Arctic to the Amazon to middle America we globe-trot through the latest science and what it means for our common future. Don’t miss this.

“I am losing precious days. I am degenerating into a machine for making money. I am learning nothing in this trivial world of men. I must break away and get out into the mountains to learn the news.”

Weather extremes and uncommon danger erupting are around this warming world. We need a tough investigative climate journalist. Enter former war correspondent, indie-journalist and author Dahr Jamail. His latest book “The End of Ice” is the talk of the planet. From the Pacific Northwest, we welcome Dahr Jamail to Radio Ecoshock. 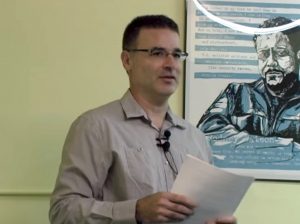 Dahr Jamail posts at truthout.org, appears often on Democracy Now! TV, and just released the new book “The End of Ice, Bearing Witness and Finding Meaning in the Path of Climate Disruption”. It’s a good read, and important, and of course Dahr includes 18 pages of notes to his sources. You can connect with Dahr Jamail at http://dahrjamail.net/

When George Bush, or was it Dick Cheney, ordered the invasion of Iraq – the U.S. sent big name journalists there to send back approved reports from carefully guarded compounds. As an American, Dahr Jamail tells us why he made the dangerous journey to become an unembedded reporter during the Iraq occupation. After his book about Iraq “Beyond the Green Zone“, the BP’s Deep Water Horizon spill in 2010 tipped him toward his other long-standing interest – environmental reporting.

Dahr said “The reporting in this [new] book has turned out to be far more difficult to deal with than the years I spent reporting from war-torn Iraq”. During the course of writing it, what he found tipped him toward personal depression. During the interview we talk about that, and all through the interview he gives tips on how he manages to cope with knowing the threats we all face. The book contains excellent black and white photos of Alaska and glaciers and important guests in his book, taken by Dahr Jamail. They remind me of the work of Ansel Adams.

Dahr Jamail publishes regular articles published at truthout.org. These serve as an index to the latest news and science about climate disruption. Truthout.org was founded after 911, and survives as reader-supported media. Dahr latest piece is “What Would It Mean to Deeply Accept That We’re in Planetary Crisis?” written with Barbara Cecil. His climate dispatch articles provide all the links to original sources in his reporting. He really shows how to publish using online media.

What Would It Mean to Deeply Accept That We’re in Planetary Crisis?

“As a species, we now hang over the abyss of a geoengineered future we have created for ourselves. At our insistence, our voracious appetite is consuming nature itself. We have refused to heed the warnings Earth has been sending, and there is no rescue team on its way.”
– Dahr Jamail, “The End of Ice”

The book (and the interview) are not all about the ice. He travels to many parts of the Earth to document the unraveling of life on this planet. For example, he visits with Dr. Thomas Lovejoy, known as “the Godfather of Biodiversity”, at the famous “Base 41” research station in the Amazon. I interviewed Thomas Lovejoy in February 2013. You can find that interview here.

Living on The Edge

“One of the penalties of an ecological education is that one lives alone in a world of wounds...”

– American naturalist Aldo Leopold, as quoted in “The End of Ice”

Last week another punishing round of strong tornadoes hit the southern United States. It’s just part of a long string of extreme storms that frightened people in Oklahoma, flooded folks in Houston, again, and cut agricultural planting in some key mid-West states in half. Even though we have listeners all over the world, we talk about the horrible string of dangerous weather in America. I think those tornadoes, floods, and storms are a signal of the new climate paradigm.

New science from the University of Oxford finds strange new weather is becoming the normal, not just in America, but in many places. The paper was led by Kai Kornhuber and published April 26 in Environmental Research Letters. Just read the brief Abstract from that paper:

I guess all of us are going to have to learn what a “Rossby Wave” is. They happen in both the atmosphere and the ocean, so we are talking about the atmospheric ones here. For people on the ground, once we get stuck in a weather system between two big meandering paths of the Jet Stream, we’ve just seen what can happen in the southern U.S. with hundreds of tornadoes a week, flooding rains, and slow-moving powerful storms.

Canadian scientist, You-tube climate teacher, and Radio Ecoshock guest Paul Beckwith has been talking about waves in a stalled Jet Stream for years. The new Oxford paper seems further proof that Paul was on the right track. It sounds like patterns of land and seas in the Northern Hemisphere are starting to form relatively predictable zones of extreme weather. Are we starting to glimpse a new “normal” for the Anthropocene?

WHY DON’T WE HEAR MORE ABOUT THE OTHER HALF OF THE PLANET: THE SOUTHERN HEMISPHERE?

I guess deciding where to live now means choosing your climate-driven poison. Would you prefer worrying about forest fires, floods, hurricanes, or drought? Most places seem to have their new threat – or are there safe zones left? Maybe Alaska or Canada’s Yukon?

I notice the new paper from Kornhuber at Oxford is all about the Northern Hemisphere. The Jets in the Southern Hemisphere are different, tightening closer to Antarctica – taking their rains with them. It is sad how little science and weather reporting we get from South America, from Africa, and really anywhere south of the Equator. I mean the town of Appari in the Northern Philippines received an extreme danger heat warning two weeks ago. The heat index hit 57.6 degrees Celsius, 135 degrees Fahrenheit with 95% humidity. But people in the countries with historic high fossil fuel emissions never hear about that. we have a big blind spot in this single inter-connected world.

NOT EVERYTHING IS CLIMATE CAUSED…

A supporter at stopfossilfuels.org has been posting Radio Ecoshock interviews as You tube videos. I appreciate that help. One commenter accused me of lying and misleading people when I repeated science from my recent guest Dr. David Keellings. Keellings is an atmospheric scientist who told us climate change cannot cause a hurricane or a tropical cyclone. The hotter seas and water-laden atmosphere can make those storms much, much worse once they start, but climate isn’t the original cause of the spin that becomes a cyclone. It seems climate change is affecting so much, we can make the mistake of attributing absolutely everything bad to global warming.

Some people worry the economy will crash as weather violence, rising seas, and other stresses just break civilization down. I worry that this fossil economy will not break down until we wreck everything beyond any hope of repair. As more serious disasters develop over the coming decades, I think two awful developments are inevitable: millions of climate refugees will flood over borders and at some point, hundreds of millions of people will die, likely of famine or disease.

It is so ironic that the current climate-denier in Chief operates from his beach resort Mar-a-Lago in Florida. That is literally “ground-zero” for what Dahr Jamail’s book calls “The Coming Atlantis”. Many of us wonder: can the U.S. economy survive the collapse of pricey coastal real estate markets?

For the book, Dahr also spoke with Dr. Ben Kirtman. He is described as “one of the leading sea level experts in the world. The program director for the Climate and Environmental Hazards program at the University of Miami’s Center for Computational Science, Kirtman is also a coordinating lead author of the Intergovernmental Panel on Climate Change’s (IPCC) Fifth Assessment Report”

HOW DO WE COPE?

Toward the end of this interview we move toward how to survive knowing that we humans are ruining the world, not just for our own survival, but for millions of other species sharing this planet. I think Dahr’s coping mechanisms could help our listeners as well.

On March 16, 2018, Dahr’s talk “Update on the State of the Planet: How Then Shall We Live?” was recorded by California State University. He talked about Stephen Jenkinson who helps people with palliative dying. Talking about climate change, Jenkinson said: “If you awaken in our time, you awaken with a sob.” We can learn about dying.

“PTSD – we all have it now, as the biosphere of the planet is perpetually being assaulted by the industrial growth machine.”

As soldiers returned from the endless Middle East wars, damaged and hurt inside, we all learned about Post Traumatic Stress Disorder. A half dozen years ago, I suggested we are all developing Pre-Climatic Stress Disorder, for those who know about the bad times yet to come. Now I think climate trauma is here – suffered directly for millions of people all over the world. Do you think recent turns toward far-right climate denialism, most recently in the surprising Australian elections, is a symptom of this larger social disease?

I criticize myself for continuing to add greenhouse gases to the atmosphere, just by living even a simple life here in North America. Dahr continues to recommend that people travel to the wilderness, including to places only realistically available by airplane. That is my one small criticism of his work. Beyond that, Dahr has made many changes to reduce his impact on the atmosphere and the planet. He also talks about “living right” or “living angry”. Meditation has played a big role in his ability to cope, as he documents the climate nightmare unfolding.

In Jamail’s book, he found a tree in the Olympic Mountains of Washington State that clings on to life in the most hostile high peak. I know it’s almost popular to say humans will go extinct soon, but I think we are tough like that tree. Some people will hang on. Dahr agrees that very near-term human extinction has been overblown.

Dahr Jamail began his book “The End of Ice” with a near-death experience on the glaciers near Mount Denali, the highest peak in North America. Listeners can hear him read that introduction here at the Guardian web site.

Dahr has let go of the idea that he can change the federal government or awaken the public. So he has become hyper-local, “being the change”, caring for the land where he lives. He find he needs to take regular trips into the wilderness to recharge his spiritual batteries, and unplug from electronics and the news (for as long as 24 days). We get “right-sized in Nature” he says. Dahr and his friends live on around 10 acres in the Olympic Peninsula. He hopes his changes will be explainable to a young kid 30 or 40 years from now that “I did everything that I could”.

Next week we explore the awful potential coming out of thawing permafrost. Plus another new development in our climate shift: back-to-back heatwaves springing up all over the world. Don’t miss it.

My thanks to everyone who shares this show on social media, to those who tell friends about this science. I also appreciate the regular monthly donors who help me keep going (allowing non-profit radio stations and the world public to get this vital information for free).

While we toss and turn in politics, our world is shaking loose into big changes off the radar. Thank you for listening and caring about our world.

I end this show with a clip from “Whose World Is This?” by Seattle musician/songwriter Jim Page.