UK scientist David McKay warns we approach multiple tipping points – maybe the most important warning of the year. From Stanford, Professor Rob Jackson, Chair of the Global Carbon Project, says controlling methane is our best chance for a livable climate. NCAR senior scientist Kevin Trenberth returns to explain the basis of it all: earth energy imbalance. Choose a one-time or monthly donation. This show has no big backers and no advertising. To get the climate message out there, Radio Ecoshock is distributed free, every week, to 106 radio stations in 4 countries. That cannot happen without continuing listener support – like you. Please help as you can.

DAVID MCKAY: TIPPING POINTS ARE CLOSER THAN THEY APPEAR

Scientists reach new conclusions about climate tipping points. YouTuber Simon Clark calls it “the scariest paper I’ve ever read”. From ocean currents to Arctic ice – the workings of this planet are not stable. Sixteen giant Earth systems can switch from one state to another, at temperatures close to present day.

Everybody needs to get this. The new paper is titled: “Exceeding 1.5°C global warming could trigger multiple climate tipping points.” The lead author is UK scientist David Armstrong McKay. He is Research Consultant and Science Communicator from Georesilience Analytics. David is also associated with the University of Exeter and the Stockholm Resilience Centre.

The public perceives global warming and its impacts as rising a bit every year, and every decade. But more sudden changes of state are possible. A few years ago I interviewed a scientist from Rice University, Pankaj Khanna. Their team literally found broad steps of coral under the sea, off Texas in the Gulf of Mexico. For coral to die, all at one level, suggests the sea rose quickly, in steps, several times. Likewise, scientists find severe drops in something called “the Labrador convection”. A 2015 study lead by Laurent Brodeau found by year 2100 the Labrador convection current will dwindle to “extinction”. So ocean currents can go extinct, not just species.

But these scientists find that Labrador tipping element, and a related collapse of the Atlantic Meridional Overturning Circulation, could cool the Earth. So not all tipping points lead to global warming. Seven out of ten global-scale tipping elements warm the world even more. The step sequence of the Labrador convection, with severe drops 70 years apart in the 1900’s, is a bit terrifying. It sounds like tectonic plates that build pressure until the earthquake. We are so used to thinking climate changes will be incremental. Are there other tipping points that change things rapidly after a build-up – a step type change?

Imagination falters when we try to calculate how these big moving parts may affect one another. This new study led by McKay does not take into account a possible domino effect, where one tipping point adds enough heat to push others into a new state, as Tim Lenton and his co-authors considered in 2008. That would have made this paper too large – it is part of the work still to be done. I assume the whole picture could be worse than adding up individual tipping elements.

Here are two key charts from the tipping points paper by McKay and his colleagues. Notice that we may have already passed several of them, and many lurk somewhere around 1.5 degrees warming over pre-industrial. A recent paper, and interview here with Michelle Dvorak, finds Earth will reach that 1.5 degrees mark by 2030. 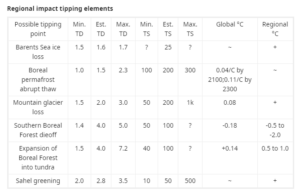 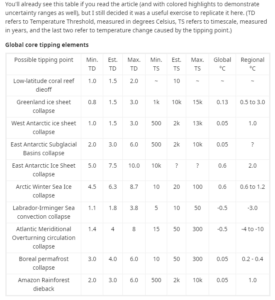 You can get right up to date with urgent action to avoid climate-wrecking tipping points. Go to climatetippingpoints.info for the latest. I also recommend the web site for the recent University of Exeter conference called “Tipping Points – from climate crisis to positive transformation”. The web site for that is global-tipping-points.org.

HOW YOU CAN READ THIS KEY PAPER (free)

Our guest from the UK is David Armstrong McKay. He lists himself as a Georesilience Analyst, Communicator, and Advocate. David is lead author in one of the biggest papers of the year, “Exceeding 1.5°C global warming could trigger multiple climate tipping points.” The full paper is behind a paywall – but the authors have provided a clear longer abstract and helpful global map free to all.

Actually, you as listeners can read this super important paper in full, free, by going to David’s web site. Here is how. Go to davidarmstrongmckay.com. Hover over “Research” in the navigation bar for the drop down menu. Select Academic Publications and scroll down to the “Exceeding 1.5 degrees” paper. Click where you see “(free OA referral link)” in green. That takes you to a free read of the full paper in Science, courtesy of the author.

In September, methaneaction.org held a webinar on why we need to restore methane levels in the atmosphere. Former Earthbeat Radio host and Methaneaction CEO Daphne Wysham introduces Rob Jackson. Rob is Professor of Earth System Science at Stanford University, and Chairs the Global Carbon Project. He is also an advisor to methaneaction. 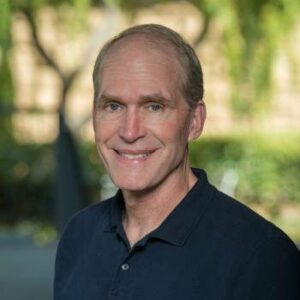 Also heard in this methane restoration presentation: Durwood Zaelke, author and President of the Institute for Governance & Sustainable Development in Washington, D.C

Your hear a selection from the online conference “Methane Removal: On the Critical Path to Reducing Peak Global Temperatures” – as presented by methaneaction.org The full YouTube video version is here. https://www.youtube.com/watch?v=UiUK0D-JNYI&t=1s

Doctor Kevin Trenberth, scholar emeritus from NCAR, the U.S. National Center for Atmospheric Research returns to explain the most fundamental fact behind climate change. Kevin is now working with the University of Auckland as well, in his native New Zealand. This is our third interview with Trenberth – working from his new textbook on climate fundamentals for all of us: “The Changing Flow of Energy Through the Climate System” 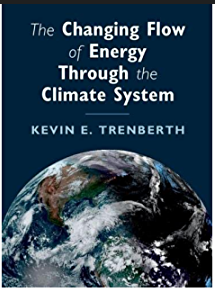 In this segment we get to the bottom. Really climate change should not just be measured by surface temperatures, much less a global average temperature. All kinds of difference energy flows are changed by the greenhouse effect, not just heat. Scientists prefer the term “Earth Energy Imbalance” (or EEI).

EEI is a measure of the difference between energy arriving from the sun, and energy that escapes from Earth back into space. For a stable climate lasting millions of years, those two energy levels would need to be in balance. Now, because we changed to atmosphere, Earth is building up more energy than it can get rid of. The “extra” energy flows through living systems and geophysical ones, like the ocean. Kevin Trenberth maps all that out in his new book.

There are not a lot of equations in Kevin’s book, except a few pulled out into side-bars for people who read math. If you want to learn the operating system for this planet, and how it shifts, I highly recommend this book by Kevin Trenberth. NO ONE was taught this science in school, except perhaps today’s university students in a specialty. Scientists learned in detail how big systems work on this planet only within the last twenty or thirty years. The K-12 school system is teaching information from the last century, in the few cases where climate is mentioned at all. (“It’s too political”.)

Most of us learned how to drive a car. We can learn how Earth functions.

At the end of the show we again feature the most unlikely climate activist: Secretary General of the United Nations Antonio Guterres. Here he is addressing the 77th U.N. General Assembly on September 20th, 2022 – telling it like it is, and oil powers be damned.

Please help Radio Ecoshock keep going. Choose a one-time or monthly donation. This show has no big backers and no advertising. To get the climate message out there, Radio Ecoshock is distributed free, every week, to 106 radio stations in 4 countries. That cannot happen without continuing listeners support. Please help as you can.

I’m Alex. Thank you for listening – and caring about our world.