Are you ready for rapid sea level rise? New science from Texas warns it can happen. We talk with lead author Pankaj Khanna. From Canada, a world expert on sea level rise and melting glaciers joins us: Dr. Richard Peltier. We wrap with a recording of Cenk Uygur of Young Turks, on “the big dark”. Radio Ecoshock 171101

New science says the present gradual sea level rise is no guide to the future. Despite the models and the IPCC, during past warming events seas rose very quickly, swamping coastal land. We could have up to three meters higher arrive not just this century, but any decade now. Nobody is prepared for that. Not China, the U.S., not Bangladesh, nobody. We’ll explore the new warning with the lead author, Pankaj Khanna.

But sea level rise will be unevenly distributed because land is still adjusting to liberation from the weight of massive glaciers. New England shores are sinking for geologic reasons, even as the seas rise. But rising land in some parts of Alaska makes it look like sea levels are falling there. Looking into the depths of the Earth we know why, partly due to the life work of our other guest, from Canada Dr. Richard Peltier.

In the end, we’ll explore “The big dark” with rising You tube news commentator Cenk Uygur, host of The Young Turks. He says what we all are bursting to say about the news and climate change.

Before we get to the startling news about rapid sea level change events, let’s find the background on how this strange planet really works. Our first guest invented the formula that determines the relationship between glacial ice cover and sea level, in any climate, including our future.

Sometimes my curiosity backs me into corners much deeper than I am. Of course, that is why we call on world experts to bail us out. This time, I was reading an article in the magazine of the Smithsonian Institution which claimed that melting glaciers are causing havoc. More perplexing glaciers which vanished over 10,000 years ago will add to the rising seas of climate change – in some place, but bring falling seas in others. Does the Earth’s crust have an active memory?

That was a good article by Jenny Chen in September 2016. But who could straighten out those mysteries of ghost glaciers? The article points to a Canadian scientist who founded a way to measure and predict all that.

Dr. Richard Peltier is a man with many titles. Located in Canada, he’s Professor of Physics at the University of Toronto. Peltier is the Director of the Centre for Global Change Science. He’s been the Principal Investigator of the Polar Climate Stability Network, and Scientific Director of something called SciNet. You can find a Wiki entry about him here. 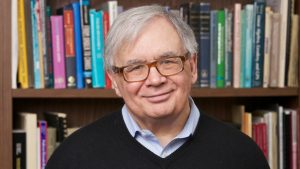 Peltier is a man who looks inside things – like waves moving deep inside the ocean; and the “Physics of the planetary interior”. Despite his pivotal role in global research into glaciers, he prefers to be called “Dick”.

We start with New England, where we have lots of listeners. Anybody who lives near the shore there knows it’s changing because the sea is rising. But it’s rising faster in New England than in other places around the world seaside. Why? You could say it’s due to the ghost of glaciers past.  Or you could say Earth has a long memory.

Ice a couple of miles thick covered a lot of North America until about 20,000 years ago. This squashes down the surface of the Earth below it. We’ve learned that the core of the Earth is liquid, but the outer layer is “solid”. But scientists have discovered this “solid” Mantle can still flow like a liquid, slowly, when it is compressed by great weight for a long period of times (like tens of thousands of years).

When the surface was pushed down a couple of hundred feet below the mighty glaciers, the land around the edges was pushed UP. That happens to include the New England shoreline. With that weight removed, the crust is slowly re-adjusting: the under-glacier lands are rising, but those boundary areas that were forced up are slowly sinking again.

So places like New England face a double dose of sea level rise: it’s going up because of climate change, and it appears to be going up because the land there is sinking (called “subsidence”).

The opposite can happen as well. There are a few places where sea levels are falling, despite climate change. The land is simply rising up, whether due to glacial changes, or due to volcanic and plate shifting, like some places in Alaska. Climate change deniers love this, trying to say “See the sea levels are falling, so climate change isn’t real.” But now we know the mechanics of all this, and yes the global seas are in general rising, no matter what the land is doing.

I love this interview with Dick Peltier for a lot of reasons. He explains how our planet works, especially the hidden parts we never see. For example, I understood why the continents can move, even on an allegedly solid crust.  Or… did you know there are ocean waves not just on the surface, but deep down in the sea?  Spend some time with this one.

In the interview he refers to: “free oscillations of the earth”. You can look that up here.

We also discuss other research domains of climate change and the Arctic, to explore a parallel problem. A few years ago, UK Geo-hazards expert Dr. Bill McGuire published his book “Waking the Giant“. He said land rising from the weight of glaciers triggers already existing fault lines into more earthquakes, or volcanoes into eruptions.

Download or listen to this 29 minute interview with Dr. Dick Peltier in CD Quality or Lo-Fi

PANKAJ KHANNA – WHEN THE SEA COMES UP SUDDENLY

Now we will hear the news that governments, the public, and most scientists have not yet digested. Sea level does not creep up regularly as shown on all our charts. During warming, it can rapidly rise in steps, steps that could easily displace hundreds of millions of people in a few decades, and rearrange the world as we know it.

Over the past few centuries, humans have recorded a predictable and relatively gradual rise of the oceans. But a new study from scientists at Rice University warn that isn’t how climate change worked in the past. Mapping out extinct coral reefs off the coast of Texas revealed a warning: seas can and do rise in sudden steps. Dr. James Hansen told us we could see up to three meters of sea level rise by the end of this century. I don’t have to tell you what that means for global cities built on coast-lines, or the human project in general. But how do we know this can happen?

Pankaj Khanna is the lead author of a paper published in Nature Communications October 19, 2017. The title is “Coralgal reef morphology records punctuated sea-level rise during the last deglaciation“.

Pankaj got his Masters at the University of New Delhi, before traveling to Rice University in Texas for his PhD, where he has worked extensively with Professor Andre W. Droxler. 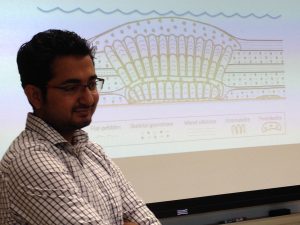 Through the Schmidt Ocean Institute, the Rice University team got use of the exploration ship RV Falkor. It has super radar mapping capabilities for the sea bottom. They discovered and mapped out a series of now-extinct coral reefs in the Gulf of Mexico.

Each reef contained a series of plateaus or steps. The largest was the oldest reef and the deepest. Coral likes to be at a certain depth, which gives it the right amount of light and nutrients. If the seas rise slowly over thousands of years, corals attempt to build upwards – but the energy to build upwards leaves them less ability to expand. So each step up leads to a smaller plateau.

But if the seas rise too quickly, the corals cannot keep up, and go extinct. That happened at least five times in the area studied. The scientists were able to pin down how fast those seas rose, leading to a startling conclusion. During times of deglaciation (like now) the seas do not rise up gradually, but experience relatively rapid increases, punctuated by pauses. During the interview we learn how all this works and why.

In geology there is a saying that the present is the key to the past. But not so in sea level rise, says Khanna. We now know that sea level can come up quickly, perhaps a meter or two within a couple of decades. The reports from the Intergovernmental Panel on Climate Change do not reflect this new science. Governments, if they plan on sea level rise at all, do not plan for this. This science projects that we can expect, during this century, to find a rapid sea level rise event. Coastal cities will flood, and millions of people, perhaps hundreds of millions of people, will have to flee.

I think that’s science that needs to get out there fast.  Please repost, reTweet, do what you gotta do, to rethink and react to a coming rapid sea level change.  You can use this smaller link to pass on the fast-playing Lo-Fi audio of Khanna on Radio Ecoshock: http://tinyurl.com/yde9k7kk

THE BIG DARK WITH THE YOUNG TURKS

Recently a massive atmospheric river covered the Pacific Ocean, from Asia to North America. It was a line of storms seldom seen. TV weather forecasters were mystified. What could it be? I play you the audio from a You tube video by Cenk Uygur, host of the Young Turks. He says what we’ve all been thinking, or maybe yelling at our TV sets during mainstream reporting of extreme weather events all over the world. 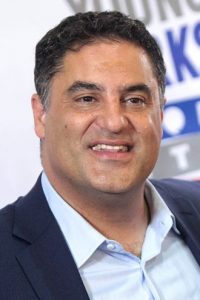 Tytnetwork.com bills itself as “the largest online news show in the world”. Cenk Uygur is part of the reason why I check their show “The Young Turks” out on a regular basis. Find that video here on You tube.

“Normal” TV weather casting sucks so badly. We just had amazing record heat in California at the end of October. When it’s over 100 degrees day after day in California, it’s way too late to deny climate change is real. Then we have very strong storms (can you say “extreme weather event”) in New England. And of course the American press doesn’t even bother reporting even stronger storms in Germany and Eastern Europe. In the port of Hamburg the seas were more than a meter above normal, flooding the fish market. Millions lost power, with flooding all over. It’s NOT NORMAL!!

Thank you for listening this week, and my thanks to everyone who supports this show. Many of you did make donations, or signed up as subscribing listeners. Frankly, I got enough to cover the costs of producing and distributing the program, but not enough to actually pay me any kind of wage for doing this. Oh well, I love the opportunity you give me to talk with such brilliant people. Plus, I just can’t quit while a series of threats are so plainly developing. On with the show!

If you can still help, please find out how here.

Please tell your friends and your electronic friends about Radio Ecoshock. That helps get the word out too.