The Mad Giant of Our Times

Calling from the hot zone, veteran Asia correspondent Bill Spindle: why energy choices by India could determine the future for you and the world. From Potsdam, atmospheric chemist Kathleen Mar warns our system underestimates the growing danger of methane, that other major warming gas.

Soon enough this civilization will be swamped with continuing hits as climate breaks down. Forget “Disaster Declarations”. It is all year for fires, floods, droughts, and weird crop-killing weather. If we do not contain everyday pollution of the atmosphere, land and seas – catastrophe will be the new normal. That is scientific fact.

Many societies are already weak with disease, drugs, and social violence. Reality is becoming unreal. Where is the stable ground, the place safe enough to make a stand? Nobody can take plans and action for granted. Can we maintain order enough to make the great changes? Is there any steering left on this bus?

I am sorry if you are down at times. It is understandable, in a mad, mad world. Please find enough joy, save some in a safe place, to feed when the soul gets hungry. Part of that joy is to witness and grow understanding. We try to do that here on Radio Ecoshock, with wise voices from all over the world. Welcome to the world, as it is, and as it could be.

Please help Radio Ecoshock keep going. You can arrange a monthly donation, or a one-time gift on this page. Radio stations get this program free, and we make it a free-of-charge download on many sites – all to get the world out about the danger to our climate and environment. Your help is much appreciated – in fact, I could not keep doing this without listener support.

What if a game-changing climate event struck the other side of the world? India and Pakistan just went through a record-smashing early heat wave lasting not days but months. Bill Spindle was there. Bill is a Council on Foreign Relations International Affairs Fellow in India. Before that he was South Asia Bureau Chief for The Wall Street Journal. 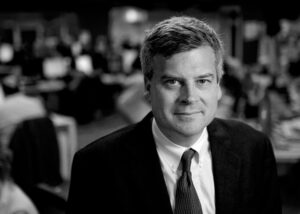 The Scientific American writes: “Northwestern and central India, some of the worst-affected regions, are believed to have experienced their hottest April on record. The country as a whole saw its hottest March in 122 years of recorded history and its fourth-hottest April this year.” This sounds like a breakthrough climate event.

At one point, the capital Delhi only cooled down to 95 degrees at night, 35 C. When the body can’t cool down, heat deaths in the days following are worse. I know India has taken steps to prepare, but was this a major health event, at the wrong time of year. Was it compounded by infamous India smog?

Bill says mercifully smog was not strong when the heat struck. The deadly smog so infamous in Indian cities in recent years is mainly a winter phenomenon he tell us, as colder air creates a lid over northern cities, keeping smog in. The population was also “lucky” (sort of) that this massive heat wave struck BEFORE the rainy monsoon season. That meant humidity was low. As we all know, it is the combination of heat and humidity that leads to highest death rates.

A Special Assessment from the UK Met Office May 18 found:

“The chances of a record-breaking heatwave in north-west India and Pakistan has been made over 100 times more likely because of climate change.”

So this heat will return. What will India do? Writing in The Atlantic magazine in May, Bill Spindle found: “The World Has No Choice but to Care About India’s Heat Wave”. In this interview, he explains why.

In the West, billionaires like Jeff Bezos and Bill Gates promise big money to push energy transition. In Bill Spindle’s blog The Energy Adventure(r), he reveals two “fossil fuel heavyweights” appear to be shifting toward greener power. One is Mukesh Ambani, now owner of the world’s largest oil refinery. But at that site, the Ambani companies are also building a very large solar wafer manufacturing plant, and a hydrolysis operation to create hydrogen. India considers hydrogen – produced with green energy like solar – to be a green energy. You can transport hydrogen to where it is needed and the only emissions are water vapor. Ambani promises to finish off that complex with a Musk-sized battery production plant. But the Ambani enterprises are still mainly fossil dependent. Their world’s largest refinery is taking Russian oil that others won’t touch due to the war in Ukraine.

For Australians, and climate campaigners around the world, the name “Adani” is blackened with big-time expansion of coal mining in Australia. But even Mr. Gautam Adani is showing some interest in alternative energy. In fact, he writes “Adani Green has ballooned into India’s biggest solar energy company.”

But as Spindle warns, India is not planning on cutting back on fossil fuels. They plan to add more oil, gas, and coal to develop their country (as the West did before them). Any sustainable energy will just be added ON TOP of fossil fuels. Spindle tells us India needs to DOUBLE it’s energy production in about 10 years, just to keep up with popular demand in a country where about 400 million people still have no electricity, and the new Indian middle-class is growing rapidly.

In his Opinion piece in the New York Times May 24, David Wallace-Wells writes: “According to one paper cited in its most recent report, India is 31 percent poorer, thanks to climate change, which already has made global inequality 25 percent worse.” Is climate change making climate action more difficult for India?

Opinion | What Vaccine Apartheid Portends for the Climate Future

Europe and the United States industrialized during a relatively stable climate. Now India, with over 1.4 billion people, tries to develop while living through extreme climate on a regular basis. The game is not fair, is it? The World Health Organization estimates half of all COVID-19 deaths world-wide were in India. That is a staggering blow. But India keeps going, apparently as unstoppable as the Ganges. Is the economy of India stable enough to deal with an even more challenging future?

In his blog The Energy Adventure(r), Bill takes us on his months long tour of threatened places, climate damage, and energy possibilities in India. I ask him about the Sundarbans and why this watery “forest” of mangroves matters for all of us. 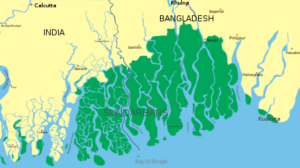 Climate change is carbon dioxide, right? Except at least 20% of global warming comes from methane. It is a Wild West for methane emissions, with hardly any rules or controls. This super potent greenhouse gas is increasing every year. Methane more than doubled pre-industrial levels, warming the planet and helping kill millions by smog.

New science led by Kathleen Mar suggests old ideas about methane can be dangerous. Dr. Kathleen Mar heads a key climate study group at the Institute for Advanced Sustainability Studies in Potsdam, Germany. Kathleen’s Doctorate in Atmospheric Chemistry is from University of California. She worked at the U.S. Environmental Protection Agency. 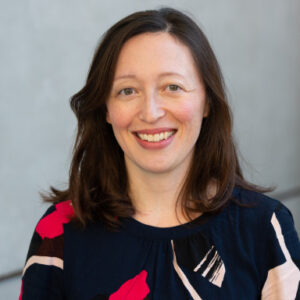 Kathleen leads the new paper “Beyond CO2 equivalence: The impacts of methane on climate, ecosystems, and health.” That is Open Access, free to read.

Here is a bit from the Abstract from this new paper published in Science:

“Although CH4 [Methane] is governed under the UNFCCC climate regime, its treatment there is limited to the ways in which it acts as a ‘CO2 equivalent’ climate forcer on a 100-year time frame. The UNFCCC framework neglects the impacts that CH4 has on near-term climate, as well its impacts on human health and ecosystems, which are primarily mediated by methane’s role as a precursor to tropospheric ozone. Frameworks for air quality governance generally address tropospheric ozone as a pollutant, but do not regulate CH4 itself.

Methane’s climate and air quality impacts, together with its alarming rise in atmospheric concentrations in recent years, make it clear that mitigation of CH4 emissions needs to be accelerated globally. We examine challenges and opportunities for further progress on CH4 mitigation within the international governance landscapes for climate change and air pollution.”

The United Nations Framework Convention on Climate Change includes methane. In the new paper, Kathleen and co-authors write: “The UNFCCC framework neglects the impacts that CH4 has on near-term climate.” I ask her to explain that further in the interview.

Of course, we all want to know: where is this new methane surge coming from? Scientists like Euan Nisbet found the largest source of increasing methane are tropical bogs. But citing a 2020 study led by Rob Jackson, Mar et al. write “a new study concludes that the recent growth is due in roughly equal parts to emissions from fossil fuel sources and the combined emissions from agricultural and waste sources.” So the methane budget is not settled in science.

One thing the science community agrees: the worrying rise in methane is not coming from the Arctic. At least not yet. Jackson et al say: “we find no evidence to date for increasing methane release from the Arctic.” By the way, Jackson and his colleagues find we are headed toward the worst scenario considered by the United Nations: 4.3 degrees C warming by the year 2100 (read “catastrophic”).

Mar and her co-authors find methane is rising rapidly in the atmosphere and “there is no reversal of this trend on the horizon: under current policy scenarios, by 2050 CH4 emissions are expected to increase by 30% compared to 2015 levels (Höglund-Isaksson et al., 2020). “

This new paper led by Kathleen Mar finds methane heats the planet in so many ways – four by my count.

1. Methane itself is a potent greenhouse gas, but comparatively short-lived (maybe 12 years).

3. The chemical breakdown of methane also reduces the availability of OH (Hydroxide). That reduces formation of sulfate aerosols which would otherwise have helped cooling. 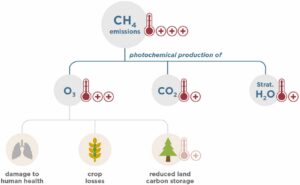 If we talk about methane and climate change, that leaves out an impact carbon dioxide does not have: increasing danger to human health. Methane is not itself a poisonous gas for us. But the chemical breakdown of methane lead to more ozone near ground level (called “tropospheric ozone”). That is very damaging to human health, especially lungs but also heart and other organs. Millions of people die every year due to the smog involving tropospheric ozone, including in developed countries like the United States, Canada, UK, and Europe.

There are annual meetings about the Convention of the Parties to agreements on climate change. But there is no international body charged with regulating and reducing air pollution. In fact, we don’t really know how much methane each country is putting into the atmosphere.

In most countries, I could drill into the ground and release lots of methane without breaking any laws, national or international. In fact, most gas fracking operations vent new wells for a couple of weeks before capturing natural gas. That is why I call it a Wild West situation. How can this gas, so dangerous for both climate and human health, remain free to dump into the air, in any amounts?

FIND OUT MORE with this helpful article by Andrei Ionescu writing at Earth.com: “Impacts of methane emissions are greatly underestimated”.

There must have been people living in the 1400’s who realized the whole religious story of devils and angels was a hoax, along with Kings appointed by God. The few woke up in the morning and knew their civilization was insane. Parts of humanity always have been mad, I guess, including the Greeks and Romans with their wars, slaves and superstition.

You and I are in a position that is not new. We hope, we try, even if the wave of wakening seldom comes in time.