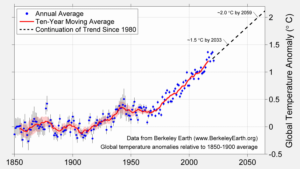 Powerful late news comes from Europe’s heat wave in mid-June 2022. While Ireland is cool, and Britain hot, the Continent is burning hot, with many fires. Germany set a new all-time record, at 39.2 degrees C, 102.6 F. at Cottbus, 100 km from Berlin. Italy has been hot too long. The great River Po is so low new sandbars and old shipwrecks are appearing. Italian dairy cows are feeling heat stress, putting out 10 percent less milk and drinking double their normal water intake.

In France, Biarritz crashed through an all-time heat record for June, getting to 42.9 C, just over 109 Fahrenheit. French climatologist Matthieu Sorel said “This is the earliest heatwave ever recorded in France” since 1947, adding the record heat is a “marker of climate change”. In 2014, the French weather presenter Evelyne Dhéliat recorded a simulated weather forecast for heat in 2050. France reached that extreme heat level already this past weekend.

Iran was over 50 degrees C, that is 122 Fahrenheit. In some places in the Middle East, night time temperatures only cooled to 37 degrees C, 98.6 – the temperature of our bodies.

European media are way ahead of North American channels, prominently explaining the role of climate change in this early heat. Sadly, for children today, this will be a cool June when they grow up.

Forget the green talk. We are increasing greenhouse gases into the atmosphere every year, not cutting anything. World leaders and industrialized populations are screaming for MORE fossil fuel energy. One of the world’s top climate scientists is calling out the international elite and consumers plunging headlong into climate disaster. Dr. Kevin Anderson says natural gas is not “green”. It is only a “transition fuel” to a deadly 4 degree hotter world. And green-talking leaders are helping us lie about it.

In the UK, Kevin Anderson is Professor of Energy and Climate Change at the University of Manchester and in Sweden at Centre for Sustainability and the Environment at Uppsala University. Anderson has also served as both Deputy Director and Director of the UK’s prestigious Tyndall Centre for Climate Change Research. 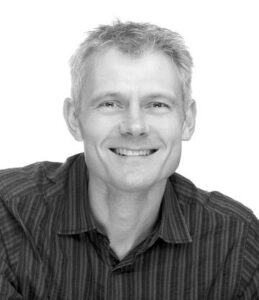 Dr. Kevin Anderson, U. Manchester and Uppsala U.

Kevin speaks with Nick Breeze, host of the ClimateGenn podcast. From Britain, Nick Breeze gathered millions of views for his YouTube interviews of climate scientists and activists. He pulls no punches talking with Dr. Anderson, in the middle of June 2022 as heat waves raged in Southern Europe, India and Pakistan, and the United States. Search ClimateGenn on YouTube or go to www.genn.cc Nick’s ClimGenn podcast is also available on all major podcast channels and Patreon.

Nick B. adds these Kevin Anderson quotes from the interview to his YouTube description:

“Senior academics are the new climate sceptics in my view!”

“Natural gas – Methane is a transition fuel… to 4ºC”

“Particularly academics, we are paid to be honest and direct about our research and we will sweeten the pill, hugely sweeten the pill in public and I think that is deeply arrogant, of often very decent people, fast we think the public can’t deal with it”

“The policymakers are simply not up to the job.”

This is a superb interview of top climate scientist Dr. Kevin Anderson by podcaster and film-maker Nick Breeze. Explore the many fine climate discussions hosted by Nick Breeze. It’s all at his web site www.genn.cc Or find the ClimateGenn podcast on all major podcast channels and Patreon. My thanks to Nick Breeze for permission to rebroadcast this Kevin Anderson interview.

ALEX: CAN WE STABILIZE WORLD TEMPERATURE – INSTEAD OF HEATING FOR CENTURIES?

In last week’s show, I talked about a new view in science pointing to a future worth fighting for. A team of 5 top climate scientists say whatever temperature the world reaches, when we finally stop adding greenhouse gases, would be a resting point, for land temperatures at least. So if we quit our addiction in a 3 degree hotter world, Earth would not continue to warm even more. The reason: the oceans which form the majority of Earth’s covering would capture any continued warmth and stow it deep below.

Climate change would not stop. The ocean would continue to heat, the ice caps continue to melt, sea level would rise for centuries, at least, and other dangerous tipping points might be crossed, like a change to the North Atlantic ocean currents or deforestation of the Amazon. But land temperatures, where humans and most land species live, could stabilize – and humans can still determine when that happens.

There is still a lot of discussion about this. The paper’s authors say land temperatures would stabilize within just a few years of balancing carbon emissions. Keep in mind, other scientists in the most recent Intergovernmental Report said Earth would continue twenty to thirty years after Net Zero Emissions. Others still think Earth will keep warming, including land, for a variety of reasons. Unfortunately, it is possible the only way we can know for certain is to live it, to play for a win by getting to Net Zero very quickly, before we get to two degrees warming and beyond.

A NEW PAPER ON WHEN WE CROSS THE DANGER LINES

There is also a new paper bearing on all this, titled : “Estimating the timing of geophysical commitment to 1.5 and 2.0 °C of global warming”. This study, led by University of Washington Grad student Michelle Dvorak, finds Earth will warm for a few years, even after Net Zero, and then cool down a bit in a stabilized state. The authors calculate when, in what year, humanity and Earth will be committed to crossing the established danger lines, based on the emissions path we take.

The authors of this new paper say:

All of this discussion of a possible landing point – reminds me of a key paper from August 2018 in the Proceedings of the National Academy. The title is: “Trajectories of the Earth System in the Anthropocene”. It was led by Dr. Will Steffen. Figure 2 in that paper shows a “Stabilized Earth” a kind of landing point, like a shelf in the motion toward Greenhouse Earth.

“Is there a planetary threshold in the trajectory of the Earth System that, if crossed, could prevent stabilization in a range of intermediate temperature rises?”

“Stability landscape showing the pathway of the Earth System out of the Holocene and thus, out of the glacial–interglacial limit cycle to its present position in the hotter Anthropocene. The fork in the road is shown in Figure 1 as two divergent pathways of the Earth System in the future. Currently, the Earth System is on a Hothouse Earth pathway driven by human emissions of greenhouse gases and biosphere degradation toward a planetary threshold at ~2 °C , beyond which the system follows an essentially irreversible pathway driven by intrinsic biogeophysical feedbacks. The other pathway leads to Stabilized Earth, a pathway of Earth System stewardship guided by human-created feedbacks to a quasi-stable, human-maintained basin of attraction.”

I interviewed lead author Will Steffen about this paper shortly after it was published. That Radio Ecoshock show is “Hot House Earth” posted on September 13, 2018.

Extinction Rebellion is very active in Sweden these days. XR Youth blocked the oil port of Goteborg. A group of XR Psychologists and scientists closed down a gas station. We do not have to accept mass extinction driven by habits and profits for the few.

“I’m looking at a longer time horizon now, and the changes I’m looking for are much broader and deeper in nature. I’m looking for green shoots of a new cultural ecosystem, one that will perhaps emerge after this one dies. I don’t bother arguing about this stuff with anyone. I think if someone wants to know, they know. And who can blame someone for refusing to accept it? But I also thought perhaps I would write this letter, so that others might know they are not alone.”

You are not alone. Right now this civilization is working as hard as it can to overheat Earth as quickly as possible. Somehow, we have to change. How and who? Stay tuned with Radio Ecoshock.

– William Ophuls, “Immoderate Greatness: Why Civilizations Fail”, 2012 – Cited by Robert Hunziker in CounterPunch, based on this Damian Carrington article in the Guardian. The whole discussion comes from this study: “Exceptional warming over the Barents area” published June 15, 2022.

That’s it for me this season (unless even more outlandish events suck me back in for a week during the summer). Please take some time to listen to our best interviews coming up during the summer. We all have a lot to learn about reality and the planet we live on.

Thank you for your support for Radio Ecoshock! As always, thank you for lending your time and mind to the cause.