Exeter scientist James Dyke on fighting rear-guard action to stave off the worst. U. Bristol expert Vikki Thompson’s paper: “The 2021 western North America heat wave among the most extreme events ever recorded globally”. Alex on “astonishing” heat in Pakistan and India. Here we are. 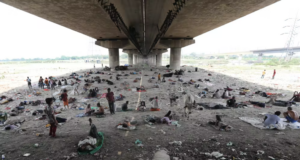 FOR MY NOTES ON THESE INTERVIEWS, PLEASE SCROLL DOWN…

Thanks to everyone who sent donations to help this program keep going free to 106 non-profit radio stations! Added to our monthly blessed donors, I have enough to keep the show going during this summer, when there is always a drought of donations. Radio Ecoshock could use more help if you are able. It’s easy to do here. 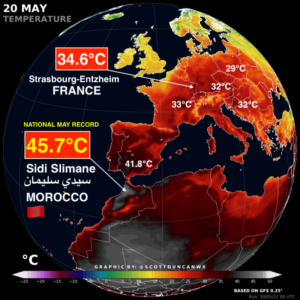 Records for heat and rain are breaking all over the world. We find out climate change is not the future. It is now. Texas is used to heat, but never this hot this early in the year. That heat wave stretched over 2,000 miles, 3200 kilometers, across the South and up the Atlantic coast. Within the same week, Europe was unseasonably hot. It doesn’t get to 30 degrees C, 86 Fahrenheit, in early May in Berlin. But it did. Europe got summer in Spring.

But the most terrible tragic heat boiled up in Pakistan and across Northern India. It started mid-March and continued into May. These places get hot, but this was Hellish. India experienced it’s hottest March in the 122 years since records began. The fourth hottest April followed.

For the Indian capital New Delhi, the heat went over 110 degrees Fahrenheit, 43 C. NASA found blistering heat islands in North Indian cities. According to NASA, at night Delhi and suburbs stayed above 95 degrees F, 35 Celsius. Some area villages stayed above 102 degrees, 39 C. That is deadly. Not everyone has air-conditioning and very high demand caused blackouts in some parts of India and Pakistan. If the body cannot cool down at night, the following day can be fatal.

In the radio program, we hear a short clip from DW TV, the German national broadcaster on May 16, 2022 about the Indian heat wave. It was worse in Pakistan. The city of Nawabshah almost reached it’s former high of 122.4 degrees F -over 50 degrees C. That is thought to be the hottest April temperature ever recorded in the Northern Hemisphere. This time Nawabshah, Pakistan reached 121.1 F. – 49.5 C.

We are shown an outdoor brick kiln in Pakistan, still operating with workers in the insane heat. A worker is throwing dozens of bricks on to a donkey. The donkey looks as though it will drop dead at any minute. I feel terrible for the donkey – but do you think those workers are in less danger, that they want to be there? The laborers are paid by the day. They need each day’s meager pay to buy food, likely for several people. Work or starve, and now with climate extremes add: or die.

The top UK weather agency, the Met Office, released a special assessment on this astonishing heatwave in Pakisan and North India. In a press release May 18, they say, quote:

“The chances of a record-breaking heatwave in north-west India and Pakistan has been made over 100 times more likely because of climate change… The study shows that the natural probability of a heatwave exceeding the average temperature in 2010 is once in 312 years. In the current climate – accounting for climate change – the probabilities increase to once in every 3.1 years. And by the end of the century, the study – incorporating climate change projections – shows this will increase to once every 1.15 years.”

The dice in this climate casino are loaded for increasing, escalating heat catastrophes for Pakistan and Northern India, and so many other places in the world. This spring, almost a billion people suffered through extreme heat driven upward by two hundred years burning fossil fuels, mostly in Europe and North America. The people of Pakistan and India did not bring this climate breakdown upon themselves. They could make global warming even worse by continuing to count on coal for electricity. India’s energy decisions will affect us all. I am working to arrange an expert call to India for a coming program.

According to NASA, half the greenhouse gases we put up there came since 1980, and one quarter just since the year 2000. Carbon dioxide was 410 parts per million in 2010. The latest official monthly measurement, for April 2022, was 417 parts per million. But the atmosphere went over 420 parts per million several times, starting in June 2021.

We bumped carbon in the atmosphere by 10 parts per million in ten years, and the rate of increase is increasing. This is why oppressive heat, extreme rains, or drought, extreme everything has arrived. It can and will get worse. How bad things get this century depends on whether we do or do not control greenhouse gas pollution. As our next guest will tell us, our actions decide this question: what is our addiction to oil, gas, and coal worth? The former normal – what does it cost in suffering, excess deaths, and extinction of species? Surely humans can find a better way.

This is Radio Ecoshock. I’m Alex Smith. Let’s get to our two guests.

NOW EVERY 10TH OF A DEGREE MATTERS

Climate breakdown. Now we are in the fight of our lives. Two scientists lay it out in stark terms in The Conversation. One is Julia Steinberger from the Universities of Lausanne and Leeds. The other is our guest, Dr. James Dyke, Associate Professor in Earth System Science, at the University of Exeter. 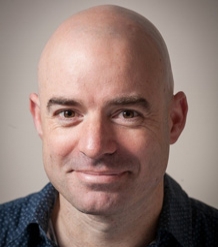 As Dyke and Stenberger point out in their article, “The World Meteorological Organization estimates there is now a 50:50 chance that temperatures will exceed 1.5°C one year within the next five.” 1.5 was supposed to be the end-of-century goal. Is the Paris Agreement broken already?

On May 11, the Guardian’s Damian Carrington and Matthew Taylor exposed the “vast projects” planned by oil and gas corporations. They call new oil and gas expansion, “‘carbon bombs’ set to trigger catastrophic climate breakdown”. Many of these projects are subsidized, regulated or permitted by governments. Who is culpable for the coming deaths from wanton carbon expansion in the 2020’s?

During the 1300’s, humans experienced a mass die-off from the plague. Now Dyke and Steinberger suggest, quote: “Humanity may be plunged into a period of mass death.” Is that really possible? We talk that through in the radio interview.

In her May 14 Gravitas program on WION, Indian journalist Palki Sharma finds reports showing the economies of 70 developing countries could fail like Sri Lanka. That is in 2022. What happens to less developed people if the world warms 3 degrees C by mid-century, as many predict?

SCIENTISTS MAY REBEL. WHY NOT INSTITUTIONS?

Dyke’s new article in the Conversation, links to Scientists for Extinction Rebellion. I talked to one of those scientists, William Livermore, in our April 20 show. James describes the tightrope scientists must walk – between climate research and activism.

A few scientists are standing up against mass suicide by fossil fuels. I am not seeing major academic institutions do the same. Why don’t we see University College London, Harvard, or Stanford fighting hard to avoid real climate catastrophe? There are two issues here: first, many big universities and institutes continue to depend on donations from fossil fuel companies, or families who made there money that way. Second, there is the myth that scientists can be independent explorers who merely advise governments on what they find – even while the ship of civilization risks sinking.

In 2021, western North America suffered a massive heat dome – hotter than all records. It was a major event in climate change. Accompanied by drought and massive wildfires, in British Columbia hundreds of people died of unbearable heat. Can we expect more way-beyond-normal events, as our emissions heat the planet?

How bad was it? Just published in Science Advances, this paper: “The 2021 western North America heat wave among the most extreme events ever recorded globally”. The lead author is Dr Vikki Thompson, Senior Research Associate at the School of Geographical Sciences, University of Bristol, in the UK. 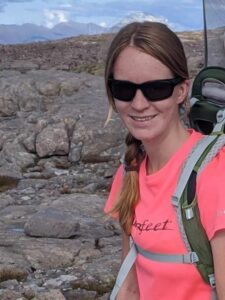 A heat event doesn’t provide moving news footage like a tornado or a cyclone – but extreme heat kills far more people than storms. The public knows so little about the history of very extreme heat. Here is a good reminder guide.

Here is just part of what this study led by Thompson found about extreme heat:

My studio is right near the epicenter of that big heat burst last June. About a third of my garden died, despite watering. Everyone hid indoors with Air Conditioning blasting, hoping the power did not go out. It seemed like a historic climate-driven event.

Scientists at the Helmholtz Centre for Environmental Research – UFZ in Leipzig – published a paper in March 2022 about compound hot-dry events. Drought-dry ground pushes temperatures even higher. But this new study with Thompson found atmospheric conditions, not drought, were the largest driver of the Western heat storm. Here we get into Planetary Waves, also called Rossby Waves. These different than the well known Jet Stream. I ask Vikki to explain their role in big heat events. 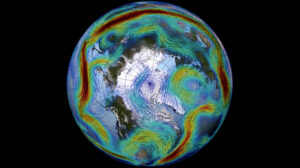 The June 2021 heat storm over Western Canada and the Pacific states was just one of 5 bubbles of heat shown in the map in this new paper. Some scientists a 5 Wave state of Planetary Waves is unusual. In a 2020 paper led by C. Covey, the authors do not consider anything beyond a wave number 4.The question is still open: do scientists expect changes to patterns in Planetary waves as the world heats up 2 degrees C or more?

Thompson’s work also shows the importance of what we choose as “normal”. If we say normal comes from averages and records during just the previous decade, maybe extreme heat events don’t increase much as the world warms. But if we look at what people a few decades ago experienced, there will be more super heat events to worry about in the future.

This is all considered as “Fixed climatology” (1981-2010) versus “Moving climatology” (based on previous decade). I find “moving climatology” is misleading, because in the real world, humans and all living things experience more and more extreme heat events, even while one method of science shows the number of such events is not increasing…

There is a warning hidden in this new paper by Thomson et al. Some places – by chance – have not had the temperature extremes they might get. They may be unprepared. The first time high heat strikes us usually the most deadly, as people at not equipped and governments have not set up cooling centers, etc.

There are hurricane centers keeping records for big storms around the world. We have storm-chasers and terrific statisticians like Bob Hensen of Weather Underground. But there doesn’t seem to be an international organization or consortium tracking big heat events. We need that.

You can read a helpful “Science Daily” article about this new study here.

Thank you for listening to this latest attempt at climate truth. Next week, we have more science of course, but also Britt Wray, author of Generation Dread.