Ugly Truths Nobody Wants to Hear

J.B. MacKinnon, co-author of “The 100 Mile Diet” on his new book “The Day the World Stops Shopping – How Ending Consumerism Saves the Environment and Ourselves”. UK Professor and aviation adviser to governments, Dr. David Lee with the harsh facts about aircraft emissions, what they do in the atmosphere, and the future of flying. Your addiction to shopping and flying – it’s killing Nature and heating the planet. Can we quit these deadly habits?

When the World Trade Towers fell, President George Bush advised Americans what to do: go shopping. If we don’t keep filling our lives with an endless parade of stuff, we all know what happens: anarchy and famine. But the emissions, the waste and pollution: we are shopping the planet to death! Can we ever escape consumer lives?

A few years ago I interviewed Canadian journalist J.B. MacKinnon about his coauthored book that became a movement: “The 100-Mile Diet: A Year of Local Eating”. Now he’s back with his latest: “The Day the World Stops Shopping – How Ending Consumerism Saves the Environment and Ourselves”. 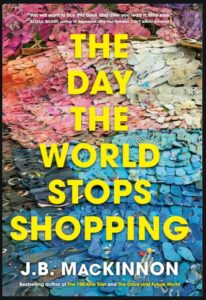 Listen to or download this 28 minute interview with J..B. MacKinnon in CD Quality or Lo-Fi

We recently did a show about “degrowth”. James MacKinnon literally searched the world to find what a “deconsumer society” could look like. It took him from a northern island in Japan all the way to a desert tribe in Namibia.

We might think that continuing disasters will wake us up to the dangers of rampant consumerism. But retired anthropologist Richard Wilk said of consumerism: “It thrives in situations of instability and contradiction, on social disruption and individual mobility.” As resource depletion ravages the Earth, do we sooth troubles by shopping even more – Shopping as rebellion against the coming chaos…

“When a culture enters into maturity, maybe there’s a tendency for human nature to try to destroy itself, to bring about its own end. Maybe we carry that inherently.”

That’s deep. During the interview, James mentions the “world’s largest experiment in Participatory Culture”. That would be in the London suburbs of Barking and Dagenham “Every One Every Day” shops, with Tessy Britton, CEO of Participatory City Foundation. 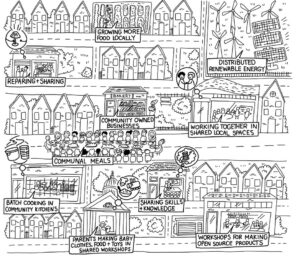 J.B. MacKinnon is a journalist. That understates the wide range of publications carrying his work. James is also an Adjunct Professor of Journalism at the University of British Columbia, teaching feature writing. His ideas are new, and stimulating. Go find “The Day the World Stops Shopping – How Ending Consumerism Saves the Environment and Ourselves”. It is a great read. We all need it more than we know.

J.B. MacKinnon co-author of the 100-Mile diet: what nature was, is now, and will be. That book was “The Once and Future World”.

On November 25th, 2010 at the Museum of Vancouver, I recorded a public presentation by Alisa Smith and James MacKinnon. It was five years after their book that became a social movement, “The 100-Mile Diet”. My recording of their public presentation is here. My transcript notes for this talk are here.

The Day The World Stopped Shopping: A provocative conversation about the future of consumerism…and our planet
J.B. MacKinnon in Conversation with Dorothy Woodend. Thursday, May 27

CHECK OUT REVEREND BILLY AND THE CHURCH OF STOP SHOPPING CHOIR!

During the interview, I bring up long-time activist Reverend Billy Talen and the Church of Stop Shopping. Rev. Billy has just brought out an extinction podcast. You can listen to one of their latest songs about that here: 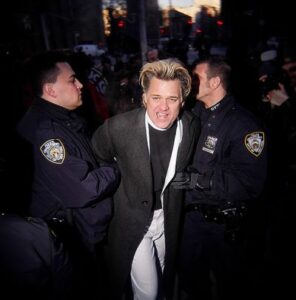 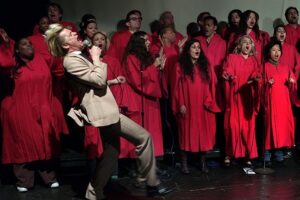 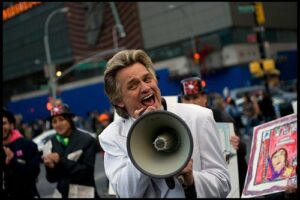 Are you aching to travel? To see dream destinations, relatives you miss so much, or business opportunities? How do you justify your next flight, knowing each gallon of jet fuel burned makes the coming climate even harder for life? What about buying carbon offsets to cover the flight?

We have reached the expert with the answers. In the UK, Professor David Lee is Director of the Centre for Aviation, Transport, and the Environment at Manchester Metropolitan University. David has researched and published atmosphere science for over three decades, and on aircraft emissions since the late 1990’s.

Media and the airline industry tell us vaccinated people are bursting to get back on board. Brits want back to Spain, Aussies and Germans long to wander the world, and Americans take planes everywhere for everything. So let’s take this piece by piece. The prime problem is the climate impact of air travel. David explains exactly what burning jet fuel does in the upper atmosphere. You may understand this for the first time with David’s clear and expert explanation. Then we will get to schemes and calculations to “off-set” that carbon.

I was a little surprised to read this in David’s paper published in 2021: “Contrail cirrus, consisting of linear contrails and the cirrus cloudiness arising from them, yields the largest positive net (warming) ERF [Effective Radiative Forcing] term followed by CO2 and NOx emissions.” So changes to the clouds are actually a greater warming than carbon dioxide from burned jet fuel !

But David and others calculate “The best estimate of total forcing for the 2005 global fleet is 0.078Wm-2,which is approximately 4.9% of the forcing from all human activities.” Source. Aside from direct gases from aircraft, we also have all the fossil fuels required to build and operate airports, to get customers and staff to and from the airports – a large amount of infrastructure and travel on the ground.

David’s latest paper is: “Greater fuel efficiency is potentially preferable to reducing NOx emissions for aviation’s climate impacts” published in January 2021 in Nature Communications. He also led this article: “The contribution of global aviation to anthropogenic climate forcing for 2000 to 2018” published January 2021 in the journal Atmospheric Environment.

One of my listeners was asked to help a company calculate their carbon offsets for airline flights. He found widely different calculators about how much CO2 equivalence was required, considering high altitude jet emissions. Compare to ground emissions burning the same amount of fuel, some multiplied by 1.5, all the way up to three times for aircraft other CO2 sources. David Lee has a low opinion of all these schemes. Yes, there are different ways of measuring presumed impacts, all scientific. But the bottom line is most carbon-offsets don’t really work.

Just take this famous case, covered before on Radio Ecoshock. Canadian promoter Russ George said he would make the Vatican the world’s first carbon neutral state. George planned to plant a forest in Hungary that would “off-set’ the emissions from the Vatican. Russ was an experienced tree-planter in Canada, and he had a spot in Hungary chosen. He even arranged an agent there. Russ met with the Pope to commemorate their achievement. You can still see that on YouTube.

But the forest was never planted. Anyway, forests in that region burned down a few years later during an extreme heat wave in Eastern Europe. Nothing at all helped the atmosphere. The carbon-offset game may help sooth the consciences of a few travelers (it’s all optional). A small amount of that money may get to forest activists who can measure species and habitat on the ground. But as far as I can tell NO CARBON OFFSET SCHEME HELPS STOP CLIMATE CHANGE.

David compares carbon offsets to the “Lutheran Indulgences” in the Middle Ages. The wealthy could buy forgiveness (for even the most heinous crimes) from the Catholic Church by donating land or gold. It was all an imaginary scam to make loot. Just for the record, Luther objected to Indulgences. That may have been the trigger that become the Protestant revolution.

I know some forest activists who say funding from carbon offsets does some good. It can put experts on the ground to help direct an alternative economy to just logging forests down, can help identify and save species and so on. In some cases carbon-offset money can actually buy endangered forest land to preserve them. But the carbon will stay up there for tens of thousands of years, whereas the politics on the ground (and other economic agreements) are lucky if they hold up for a few decades. We should be able to fund those experts and efforts to save forests without taxing sin. If we got the off-set money for a different sin, like prostitution or child labor, that would still be helpful but wrong, just as allowing continuing aircraft damage to the atmosphere is wrong.

REWARD THOSE WHO STAY NEAR HOME AND DON’T FLY

Maybe we can build some social recognition for people who don’t fly. We get a big tax cut, or front-row tickets, or at least a badge of honor to say we care about our children’s future. What have you heard about social encouragement, and can it withstand the barrage of media pressure to get back into the air?

The BBC has a popular travel show. You and I are still waiting for the popular stay at home show aren’t we? That doesn’t mean prison by the way. The global British Empire of trade and domination was built entirely without fossil fuels. Enterprising tourists are rediscovering ships and trains which pollute a lot less.

David Lee tells me he has not taken a personal flight in 20 years. Twelve years ago I flew to my mother-in-law’s funeral. I can’t promise I will never fly again, but I am trying to keep from wrecking the climate for our kids and grandson. Can you join that?

The pandemic is not over, but neither is hope. As South African Archbishop Desmond Tutu said: “I am not an optimist. I am a prisoner of hope”. We stayed home and shopped less during the pandemic. After withdrawal, let’s not binge again.

Thank you for hearing unwanted truths, or as alternative radio called it, “Unwelcome Guests”. I have collected a couple of dozen interviews with experts on extreme heat in my book, “Surviving in the Age of Extreme Heat” available here. I charge $7 to “offset” the costs of transcription and book layout. As the record heat piles on, please buy a few copies for friends, relatives, work-makes – everybody who needs to know.

I’m Alex. These are hard times. Be kind to yourself. 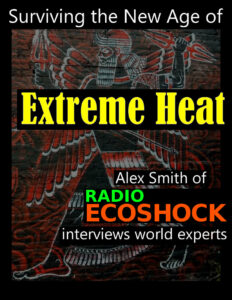