The new pandemic is raging with variants across the world. In the background the first waves of extreme weather arrive. Guest scientists Matei Georgescu and John Dialesandro reveal climate change strikes cities first and hardest. Cities will be many degrees hotter than the global average temperature. It is not just heat: more urban flooding too (think Nashville or UK).

The new pandemic is raging with variants across the world. In the background the first waves of extreme weather arrive. In this show scientists investigate how climate change will strike cities first and hardest. Can mega-cities create their own weather? Why will cities be many degrees hotter than the global average temperature rise we always hear about? It isn’t just the heat: more urban flooding too (think Nashville).

Our first guest Matei Georgescu explains new science showing cities distort the natural cycles of drought and rain. Expect to hear about record floods again and again, with no word from the weather reporters about why this is happening. We know unbearable heat and floods are coming to cities around the world, but everyone will act surprised as it happens. Setting records used to be a good thing. It was about progress. In these times of a shifting climate, extreme weather records become the normal signposts on the way to a different planet.

I am thankful to have listeners support my relentless efforts to warn the public about the grave dangers of changing the world’s climate with greenhouse gas emissions. Radio Ecoshock reaches listeners around the world through a wide variety of media platforms. I have no staff, but thankfully have some volunteers (like Jackie and Carl!) who help out. Listeners pay the program bills. If you can help out, please check this out.

WHY CITIES WILL FLOOD MORE DURING GLOBAL WARMING – MATEI GEORGESCU

Matei Georgescu is Assistant Professor at the School of Geography & Urban Planning at Arizona State University it Tempe Arizona. Matei has been working on this problem of heavy precipitation and land use right from in all his Thesis papers right up to his PhD from Rutgers University in Atmospheric Science. He has received several million dollar plus research grants from the National Science Foundation.

We start with the urban heat island effect, and findings from Georgescu’s 2014 paper in PNAS. Matei and his team said near-surface temperatures in cities will rise 1 to 2 degrees C above and separate from greenhouse warming expected globally. That is a lot of extra heat. Where does it come from?

“in the absence of any adaptive urban design, megapolitan expansion, alone and separate from greenhouse gas-induced forcing, can be expected to raise near-surface temperatures 1-2 °C not just at the scale of individual cities but over large regional swaths of the country. This warming is a significant fraction of the 21st century greenhouse gas-induced climate change simulated by global climate models.”

His new paper published in Environmental Research Letters finds a second major impact of big human development: changes to precipitation. The odds of extreme precipitation and urban flooding are increasing. The paper is: “Precipitation response to climate change and urban development over the continental United States”. This is an Open Access article (you can read it free) published in Environmental Research Letters 15 March 2021.

THE CAUSES OF MORE EXTREME RAINS IN CITIES

“Destabilization of the urban boundary layer resulting from development of the urban heat island (UHI) circulation, modification of convective structures due to the rough urban form, and the presence of cloud condensation nuclei in more polluted urban environments are broadly considered responsible for urban-induced precipitation modification.” (M. Georgescu et al, 2021).

The paper gives this example from Colorado:

“For example, some locations along Colorado’s Front Range experienced as much rainfall during the 2013 September floods as normally received during an entire year (Gochis et al 2015). The stalled cold front and ensuing extreme rainfall became the state’s costliest natural disaster, resulting in upwards of $1 billion in property damage (Aguilar 2017).”

One factor arising in descriptions of the new urban flooding, including the surprising 2010 waters in Nashville, is stalled or slower moving fronts and storms. Various hurricanes from Houston to New England have lingered or returned instead of moving off briskly. we presume that is partly due to a slowing Jet Stream, another impact of climate change.

On April 6, Woodwell Climate Research Institute put out a press release including:

“On May 1 and 2, 2010, the Nashville area experienced an extreme precipitation event that nearly doubled the previous record two-day rainfall amount and produced what we have traditionally called a 1-in-1000-year flooding event. But a recent Woodwell Climate analysis of Nashville’s flood risk indicates that’s a misnomer – that such extreme precipitation and flooding are happening more often and will likely double in frequency by mid-century.

Unfortunately, we saw that in action recently, when Nashville was again hit with extreme precipitation and flooding. On March 27 and 28 [2021], Nashville got 7.01 inches of rain – the second highest two-day rainfall total on record. According to our analyses, Nashville can now expect this sort of event every thirty years.”

The new study by Georgescu and colleagues connects with a general theme coming out of new science. First we had global climate projections. A decade or so new estimations of regional impacts became available. Now, with more data and better models, scientists publish about direct impacts at city levels. I just interviewed Dr. Lei Zhao on what cities can expect. [He is the lead author of the new paper “Global multi-model projections of local urban climates”, published January 4th, 2021 in Nature Climate Change.] Lei Zhao predicts the AVERAGE city temperature will rise 4 degrees C – 7 Fahrenheit. Matei is familiar with Zhao’s work and agrees with his conclusions.

Cities develop over a canvass of several agents of change. As Matei notes in the paper, plants and animals are moving poleward due to global warming. Meanwhile your research shows cities themselves are changing the local climate which will affect other forms of life. And humans simply wipe out habitat to build roads, shopping malls and more housing tracts. Do you think cities can co-habit with natural life, or do they tend to exterminate it? Are cities sustainable? Will the tide of humans into mega-cities be reversed during this century? If we cannot tame the variants of COVID, will people flee densely-packed areas, becoming a distributed network economy?

MILLIONS WILL BE DISPLACED BY RIVER FLOODING

The poorest people may have no options. According to another new study in Environmental Research Letters “Global warming and population change both heighten future risk of human displacement due to river floods”. That was published March 24, 2021 and led by Pui Man Kam at ETZ Zurich.

Reading from the Abstract from that paper, quote:

“Every year, millions of people around the world are being displaced from their homes due to climate-related disasters. River flooding is responsible for a large part of this displacement. Previous studies have shown that river flood risk is expected to change as a result of global warming and its effects on the hydrological cycle. At the same time, future scenarios of socio-economic development imply substantial population increases in many of the areas that presently experience disaster-induced displacement. Here we show that both global warming and population change are projected to lead to substantial increases in flood-induced displacement risk over the coming decades. “

That fits in exactly with our the work of our first guest Matei Georgescu. But outside of new diseases enabled by hotter temperatures, the biggest hit will be long-lasting unbearable heat in most cities of the world. Cities in the United States, Europe, China and Russia will feel more like the Middle East. You hear the world may warm by 3 degrees Celsius of more by the year 2100. But that is a global average temperature that includes the oceans covering the majority of this planet. Land will be up to 8 degrees hotter, and cities several degrees hotter than that.

CITY POOR GET HOTTER THAN ANYONE – JOHN “JAKE” DIALESANDRO

Already, the poorest areas in many cities are regularly two or more degrees hotter than wealthier suburbs. That heat inequity is on top of the urban heat island effect. I see social unrest literally boiling out of the ghettos, Favelas, and even inner cities of America during the heat waves already here, with much more to come. Let’s explore the ugly realities of hotter times with one new study about cities in the American Southwest.

You already know the poorest people in the world will suffer most as climate changes. But don’t think overseas. New science finds disadvantaged neighborhoods of America will heat, quote “ 2.2 °C (4 °F) hotter than the wealthiest 10% on both extreme heat days and average summer days.” That may be true in Europe and Asia too.

Climate change is unfair, whether you call it “thermal inequity” or deadly heat. From the Geography Graduate Group at the University of California Davis, we reached the lead author John Dialesandro, more widely known as “Jake”. He is lead author of the January 2021 study “Dimensions of Thermal Inequity: Neighborhood Social Demographics and Urban Heat in the Southwestern U.S.”. This is an Open Access article. 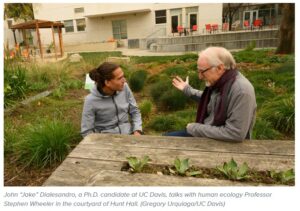 I was able to make two suggestions for further study on cities and inequality as the world warms. First, I wonder if a “heat equity tax” could be leveled by a city or state, to pay for infrastructure improvements to save lives in low-income zones. Maybe we could measure actual temperatures and levy the tax based on how much cooler upscale neighborhoods are.

Second: does the power required to run life-saving air-conditioning tend to go out sooner or longer in the poor areas of cities? We know low income folks are less likely to have expensive generator backup or solar panels to keep AC going. Jake said his team would look into that.

Bottom line: out in the wealthier suburbs with more green space, trees and possibly water features, temperatures are two degrees or more cooler than in poor areas, especially inner cities. That temperature difference can mean lives lost during extreme heat waves which are becoming so common due to climate change. But due to our weather reporting system, you would never know this is happening. We can make changes to make heat more survivable for all.

In the United States, people of color or Latinx are again getting the worst of climate change impacts. Urban planning and many other government and corporate actions need to address this.

We all look forward to summer. But how about endless summer, six months of the hottest days you have ever lived? Tune in again next week as we explore more science of the coming times.

I am thankful to have listeners support my relentless efforts to warn the public about the grave dangers of changing the world’s climate with greenhouse gas emissions. Radio Ecoshock reaches listeners around the world through a wide variety of media platforms. I have no staff, but thankfully have some volunteers (like Jackie and Carl!) who help out. Listeners pay the program bills. If you can help out, please check this out.

If you missed it, I posted another YouTube video last weekend. This is Dr. Levke Caesar explaining a weakening Gulf Stream Current and what that means for the American and Canadian East Coast, plus Ireland, UK, and Northern Europe. It was from last week’s Radio Ecoshock show.

Thank you for listening, and caring about this world.

I close out this show with part of a global warming song from American song writer Andy Morton. Find it on YouTube. Thanks Andy.