Don’t forget to help Radio Ecoshock keep going if you can! This is listener-supported journalism. I can’t go on without your help. Find out how here.

During two years of pandemic, the climate action camps are empty. Climate protests are few. Most people are more afraid of illness and job-loss than a hot, unstable future. But the big storms, fires, and strange weather just keep on coming, along with hair-raising warnings from climate scientists. Is there any plan to save a climate worth living in?

Tom Bowman says there can be. Tom advises businesses and governments on next green steps. He is author of the book “What If Solving The Climate Crisis is Simple” and now a new work “Resetting Our Future: Empowering Climate Action in the United States”. That book contains a big strategic plan for the United States. It ties into a program meant to work in every country. It could include you.

In his business life, Tom specialized in exhibitions and communications about the environment, climate and science. Now we are cut off physically during the pandemic. We try to form online crowds. I ask Tom how the COVID-19 pandemic has reshaped climate activism. Horrible as the disease has been, Tom sees some opportunities for the changes we need.

Tom Bowman and Deb Morrison are Editors of the new book “Empowering Climate Action”. It is really a report on a climate plan for America, wrapped with notes on process – and Commentaries from well-known activists. Also within the book: over a year of planning by a truly diverse collection of Americans to form a climate action plan under the United Nations plan – all done while America was out of the Paris Climate Accord, thanks to the former guy.

The thing is with ACE, as it is called, and the theme of this book: top-down orders and regulations to slash greenhouse gas emissions are never going to work without all of us working to make it happen. We need to reach out and listen to rural areas, to people in all walks of life, to community groups, people of color, Latinx, everybody. No billionaire or President can bring the huge changes we need to our lifestyles and economy. Only we can. So in my opinion, there is a lot less B.S. in climate activism Bowman is helping to communicate. 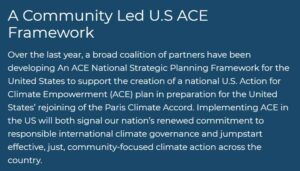 In his short Commentary on the Action for Climate Empowerment strategy paper, the co-founder of 350.org Bill McKibben said simply “An ACE Strategy Must Be Prepared for Opposition”. There is already plenty of that. I would add “Be prepared for apathy”. Picture the Louisiana city flattened by two mega-hurricanes in a row. Think of the millions of people out of work, no insurance, and yet another fire roars through. People are tired, trying to get through tomorrow. Is the idea of “activism” for the future sliding away?

The other fountain of apathy comes from at least 20 years of climate activism that failed to slow emissions. We marched, we talked, we were artistic, we lobbied, got arrested and this civilization is still hurtling toward extreme heat and destabilized weather. If people do not believe anything will work, where can we go from here?

Tom is an experienced broadcaster himself, and a pretty good musician too. I don’t hold back the tough questions (like population!) – but Bowman can handle all that. Even if you are in the UK or Australia give this a listen because (a) it really matters if the U.S can steer away from the fossil-powered civilization and (b) this is a great application of a U.N. program meant to activate people in ALL countries of the world. Maybe you can get ideas.

YUPING GUAN: THE SEASONS HAVE CHANGED – HEADING TO 6 MONTH-LONG SUMMERS

You may feel the seasons are “not what they used to be” and you are right. Here is a the Plain Language Summary of a new reckoning of the seasons by Chinese scientists. 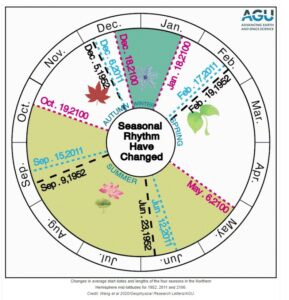 “A series of phenomena such as early flowering of plants and early migratory birds are suggesting that the traditional four seasons may have changed.

We focus on how the four seasons changed during 1952–2011 and will change by the end of this century in the warming Northern Hemisphere midlatitudes. We find that lengths and start dates of the four seasons have changed, and the changes will be amplified in the future. Over the period of 1952–2011, the length of summer increased from 78 to 95 days and that of spring, autumn and winter decreased from 124 to 115, 87 to 82, and 76 to 73 days, respectively.

In addition, summer is projected to last nearly half a year, but winter less than 2 months by 2100. Such changes can trigger a chain of reactions in agriculture, policy-making for agricultural management and disaster prevention requires adjustment accordingly. The seasonal-related topics involving ecology, the ocean and the atmosphere also need to be revisited.”

That is from the paper “Changing Lengths of the Four Seasons by Global Warming” published in Geophysical Research Letters February 19, 2021. I spoke with co-author, scientist Yuping Guan. He is a physical oceanographer at the State Key Laboratory of Tropical Oceanography, of the Chinese Academy of Sciences. 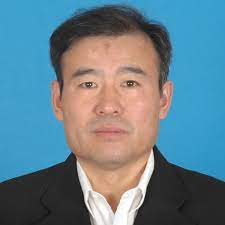 Dr. Yuping Guan is an Oceanographer with experience studying the all-important rain-bearing Asian monsoons. He is the mentor for the lead author of the new paper, Ms. Jamin Wang.

A wave of important climate news and science is coming from China. After Chinese President Xi Jinping set a path toward an ecological civilization, funding and encouragement of climate science increased greatly. Now that harvest is coming in but here is the challenge: English with an Asian accent can be difficult for people in North America and Europe. We are trained to expect the voices of professional broadcast journalism from the West. On the other hand, we all lose if we fail to understand what Chinese science is contributing to world knowledge. In this show, you hear an abbreviated version of our discussion, about 10 minutes long.

Listen to or download this 14 minute segment on Yuping Guan, including the interview, here.

Northern Hemisphere summers may last nearly half the year by 2100

“This shift in the seasons may result in more severe weather events, said Congwen Zhu, a monsoon researcher at the State Key Laboratory of Severe Weather and Institute of Climate System, Chinese Academy of Meteorological Sciences, Beijing, who was not involved in the new study.

“A hotter and longer summer will suffer more frequent and intensified high-temperature events – heatwaves and wildfires,” Zhu said. Additionally, warmer, shorter winters may cause instability that leads to cold surges and winter storms, much like the recent snowstorms in Texas and Israel, he said.”

WATCH OUT FOR “FALSE SPRING”!

“However, the temperature in spring decreased at the 95% confidence level (Figure 2b). Increasingly colder and earlier spring seasons may pose a greater risk of false spring (subsequent hard freezes damage plants that awaken prematurely from dormancy) for plants (Allstadt et al., 2015), which may inflict a heavy blow to the economy (Kral-O’Brien et al., 2019).

The false spring in Michigan in 2012 resulted in more than half a billion dollars loss from local fruit trees (Knudson, 2012). Plants that survive false springs may not be able to grow successfully due to weak resistance to future stress (Allstadt et al., 2015).

The seasonal effect is not limited to acting on itself; it spreads to other seasons and even brings about long-term consequences; for instance, early springs are likely to indicate early summers (Crimmins & Crimmins, 2019), early growth due to advanced onset of spring may face a shortage of water in the remainder of the growing season (Buermann et al., 2018), and short and warm winters can exacerbate the occurrence of false springs (Allstadt et al., 2015). The chain reactions complicate the effects of seasonal changes. Robust seasonal forecasts will enable the optimization of the operation and management of activities, such as agricultural production, and avoid some possible risks.”

I long for the day when instant translation will be available for this non-profit radio show. With the mega-problems facing humanity we certainly need all the best available minds working together. About 1 in 5 humans are Chinese. China has a longer history of education than the West. As China emerges as one of the wealthiest countries in the world, their pro-science stand on climate could be critical. I am open to your ideas, as a listener, on the best ways to communicate the best of Chinese science. You can write me any time. The email address is: radio [at] ecoshock.org.

Now it is time to turn the tables. Last summer Brent Ragsdale from KKFI Kansas City Community Radio asked to interview me for his program. Brent is a Mechanical Engineer with interests in the energy transition. He is also co-host of the program EcoRadio KC. Here is our discussion about radio, the environment, and what we try to do for both.

Listen to or download this 15 minute interview as Brent Ragsdale talks with Alex Smith here.

The interview of Alex Smith by Brent Ragsdale was recorded in July 2020.

IMPORTANT NEWS FROM THE MICRO WORLD NEXT WEEK (including the virus)

Next week I have a real treat for you. With all the COVID virus worries, I was surprised by new views of the micro-world – as an environmental issue. We talk with seasoned microbiologist David Thaler, an American scientist working in the Center for Molecular Life Sciences at the University of Basel, Switzerland. David is a big-picture thinker with a lot of recognition. When it comes to the virus and life in tiny space, David says make peace, not war. Don’t miss that next week on Radio Ecoshock.

I’m Alex. Thank you for listening, and caring about our world.

Plants & Animals Wiped Out by Climate Change →
← Is The Micro World In Trouble Too?