Climate: The Fatal Fork In The Road

The fork in the road: deadly Hothouse Earth, OR a human “stabilized” planet. My 2018 interview with Professor Will Steffen about where the planet is going. Then we search for tipping points leading the climate to hot-house Earth. Top Swedish scientist Johan Rockstrom explains “Planetary Boundaries” on Radio Ecoshock.

You can watch the first half hour of this program in this YouTube video.

It is just before Christmas as this show plays on more than 100 radio stations in multiple countries. Most of you have been pummeled by the pandemic, and many were kind of tossed out of the economy at least until it’s over. With all the kicks of 2020, why can’t we take a week off, tune out, take the holiday without more talk about climate doom? I used to do that, putting out a show of green music. But as you will hear in this program, we do not have a year, a month or a week to lose.

“A lot of people are now saying time is running out rapidly to avoid that. This is really the fork in the road that we envisaged in that 2018 paper on Earth system trajectories. The fork in that pathway between “stabilized Earth” and “Hothouse Earth” probably lies this decade, maybe in the first half of the decade. Certainly I think by 2030 we will have put ourselves on one or the other pathways and it will be difficult to shift. That’s why it’s extremely important now that people understand the seriousness of this risk and understand that the students [like Greta Thunberg’s Friday strikers] are right. This is an emergency situation. We actually do have to make the right choices over the next couple of years.”
– Will Steffen, Radio Ecoshock, December 16, 2020.

In 2019 the same team published a paper on feed-backs that could take us to Hothouse Earth.

To really understand where we are, and where we are headed, I will read you key paragraphs from the 2018 paper “Trajectories of the Earth System in the Anthropocene”. The authors, led by Will Steffen say of Stabilized Earth:

“This analysis implies that, even if the Paris Accord target of a 1.5 °C to 2.0 °C rise in temperature is met, we cannot exclude the risk that a cascade of feedbacks could push the Earth System irreversibly onto a “Hothouse Earth” pathway. The challenge that humanity faces is to create a “Stabilized Earth” pathway that steers the Earth System away from its current trajectory toward the threshold beyond which is Hothouse Earth (Fig. 2). The human-created Stabilized Earth pathway leads to a basin of attraction that is not likely to exist in the Earth System’s stability landscape without human stewardship to create and maintain it. Creating such a pathway and basin of attraction requires a fundamental change in the role of humans on the planet. This stewardship role requires deliberate and sustained action to become an integral, adaptive part of Earth System dynamics, creating feedbacks that keep the system on a Stabilized Earth pathway (Alternative Stabilized Earth Pathway).

If the world’s societies want to avoid crossing a potential threshold that locks the Earth System into the Hothouse Earth pathway, then it is critical that they make deliberate decisions to avoid this risk and maintain the Earth System in Holocene-like conditions. This human-created pathway is [represented in Figs. 1 and 2 ] what we call Stabilized Earth [small loop at the bottom of Fig. 1, Upper Right], in which the Earth System is maintained in a state with a temperature rise no greater than 2 °C above preindustrial (a “super-Holocene” state) . Stabilized Earth would require deep cuts in greenhouse gas emissions, protection and enhancement of biosphere carbon sinks, efforts to remove CO2 from the atmosphere, possibly solar radiation management, and adaptation to unavoidable impacts of the warming already occurring. [The short broken red line beyond Stabilized Earth in Fig. 1, Upper Right represents a potential return to interglacial-like conditions in the longer term.]

A critical issue is that, if a planetary threshold is crossed toward the Hothouse Earth pathway, accessing the Stabilized Earth pathway would become very difficult no matter what actions human societies might take. Beyond the threshold, positive (reinforcing) feedbacks within the Earth System—outside of human influence or control—could become the dominant driver of the system’s pathway, as individual tipping elements create linked cascades through time and with rising temperature (Fig. 3). In other words, after the Earth System is committed to the Hothouse Earth pathway, the alternative Stabilized Earth pathway would very likely become inaccessible [as illustrated in Fig. 2.] “

That was from the paper “Trajectories of the Earth System in the Anthropocene” as published by the Proceedings of the National Academy of Sciences, August 14, 2018. I then go to my interview with lead author Will Steffen about this overview of our plight.

Read the full blog with links on my 2018 Will Steffen interview here.

Listen to or download (or pass on!) my 28 minute interview with climate scientist Will Steffen in Lo-Fi [2018 SHOW]

One of my climate heroes is Dr. Hans Joachim (John) Schellnhuber. Early on, Schellnhuber dared to ask the question: what if we go beyond 4 degrees C of heating? There were two conferences on that. The first was at Oxford. I broadcast Schellnhuber’s speech from the second, held in Australia in September 2009. Find that program and my detailed notes on his speech here.

Transcript of that show here. 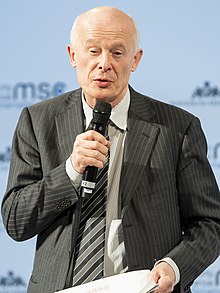 In his 2011 speech at the “Four Degrees of More” conference in Australia, Dr. Schellnhuber revealed something that always made me wonder. He said studies in physics show the temperature is unlikely to stay anywhere around 7 degrees C hotter. Simple calculations about the wave patterns of matter suggest the temperature would either rest around 5 degrees, or keep migrating up to 10 degrees hotter, where there is another natural plateau. The later 2018 paper also talks about possible resting points, based on potential energy of the system. It’s deep stuff.

If we push the planet into the track for Hothouse Earth, it will be due to crossing “planetary boundaries”. These are the so-called tipping point where large natural systems begin to release more greenhouse gases that we do, and more than the current climate can tolerate.

Here is my Radio Ecoshock interview with Johan Rockstrom, the Swedish leader of planetary boundaries, first broadcast in 2016.

There is some good news in the climate struggle. It looks like the age of coal is closing faster. The world’s largest coal smokestacks were demolished in December 2020. The 2,400-MW Navajo Generating Station (NGS) in northeastern Arizona is dead. As recently as 2017, the owners tried in federal court to extend operation of this mega-emitter into the 2040’s. 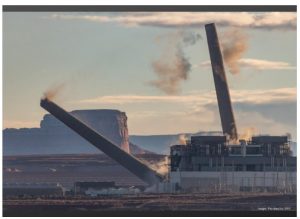 After rumors China had stopped unloading Australian coal, now it’s official. Australia has lost its largest coal customer. Right in Australia, the country’s newest coal-fired power plant has been written off as worthless by the Japanese owners. Banks don’t want to refinance coal anymore. To my Australian friends and listeners: take a hint. The government is wasting its never-ending subsidies for the coal industry. Give it up. Your coal industry is only fueling global warming around the world, and heatwave wildfires at home.

WHAT’S THE RUSH ON CLIMATE ACTION?

Why is there such a rush to get out new vaccines for emergency use? Because millions already died from COVID-19 around the world. In the United States, with over 3,000 deaths a day, nobody can wait another month for testing. As you heard in this program, the climate situation is the same, and perhaps even more urgent. The United Nations just said, every country needs to declare a climate emergency, no matter what else is going on. Even if our society and economy are teetering on the edge of collapse, so are our chances for a decent future. We need weather that humans, their crops, and all the species can live in. Everything is at stake.

The term “existential threat” is wildly over-used. People use it to describe politics or a business decision. No. Climate change is an “existential threat”. If we can’t solve the climate threat, human civilization will not survive. Eventually, all large mammals including humans will not be able to survive a wrenching heat surge of several degrees C. This is live or die stuff. We must all find out what the danger is, and what we need to do to stabilize our home planet.

I’m Alex Smith. Please support this program if you can. Thank you for listening, and caring about our world.

We ended the show with a clip from “Change Change” by the Canadian group Thistle, starring Debra Lee Halinda.