Women leaders control the COVID-19 pandemic better than nations led by men. Would that be true of climate action too? Welcome to petro-masculinity, and the renewed call for woman power with Cara Daggett and Jennie C. Stephens.

From the United States through Europe to Australia there is a growing attraction for authoritarian government. Despite what you think, this urge may become stronger as climate change drives more extreme weather into our lives. The regression from Democracy is powered by denial of science – medical science during a pandemic and climate science during a climate emergency.

Why is this happening? It is time to talk with Cara Daggett. In 2018 she published “Petro-masculinity: Fossil Fuels and Authoritarian Desire”. It is all about what is happening today. Dr. Daggett is an Assistant Professor in the Department of Political Science at Virginia Tech. She is a feminist researcher into political ecology, and author of the new book “The Birth of Energy”. 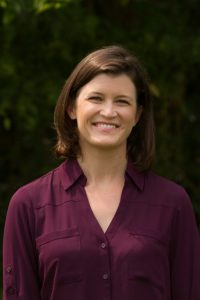 Last week yet another massive hurricane hit the U.S. Gulf Coast, part of a chain of extreme weather striking the country in 2020. Yet it seems many victims of climate change cling even more desperately to climate denial, or at least accept that position from media giants like Fox News. Why in America, do victims of climate – or even COVID-19 – still shout in rallies for more authoritarian rule and a right to violence?

Concern with climate change is often considered to be on the progressive left of the political dial. But Cara suggests, in our current structure, worry about climate change could bring more demand for authoritarian solutions. In her work on “Petro-masculinity” she even talks about “climate fascism”. As an environmentalist I explore history. I was horrified to realize the Nazis has a green side. Hitler was a vegetarian. Nazi philosopher Martin Heidegger spoke passionately against damming the Rhine River, saying rivers have rights. One of Hitler’s henchmen wanted to bring back native animals to restore Nature. Is it possible environmentalism is not necessarily incompatible with the extremes of male political violence?

By alerting my radio listeners to warnings from climate science, am I creating more dis-ease in some people. Could that actually add to a desire for an authoritarian to “solve” the climate crisis for us? Maybe we yearn for a great leader rather than being left to make personal painful decisions?

The king of petro-masculinity has to be Charles Koch, the surviving Koch brother. Behind the scenes this amazingly rich oil man creates false front groups to push his agenda – which is male and ultra-conservative. But some poor men, those actually left out of the wealth train, are even more ardent climate deniers. They may get angry, they may get violent, to defend what they see as “their way of life”. We are seeing that in several countries.

When Donald Trump promised to bring back the coal industry in America, (which instead went bankrupt), he was he drawing on petro-masculinity in his base. What about another coal-seller, Australian Prime Minister Scott Morrison, and the arch petro ruler of Russia, Vladimir Putin? Add in the Middle Eastern Kings. The world is full of petro-men in charge. When we go to the oil patch, whether in Texas, the Canadian Tar Sands, or Saudi Arabia, it is filled with men and emblems of male strength like giant machines and heavy duty pickup trucks. Electric cars or engines are for sissies. If “real men” claim fossil power, where does that leave the hope-for Green energy? Is solar power too “feminine” or “gay” for the last of the fossil men?

So here we are, stuck in a herd of recalcitrant males shouting, revving their diesel engines, and brandishing guns. The next super hurricane is coming onshore and California is still burning. Is there a way out of this trap? What can we do? One petro-masculine approach to the environmental crisis is the rash of men who want to engineer our way out of the crisis partly designed by engineering. They want to rebrand big machinery and more production as “geoengineering” to save the climate. Women it seems, prefer to work WITH nature.

In her research article Cara Daggett writes: “Analysing petro-masculinity alerts us to those perilous moments when challenges to fossil-fuelled systems, and more broadly to fossil-soaked lifestyles, become interpreted as challenges to white patriarchal rule.”

We are in one of those “perilous moments”.

FROM THE INTRODUCTION (of Petro-masculinity)

“Perhaps not surprisingly, given the amount of money and privilege at stake, the tragic ethos demanded by global environmental justice is being resisted. Those regions that have emitted the most carbon dioxide are positioning themselves to profit from a warming earth by advancing a militarised and corporatised version of climate security. The result, as Christian Parenti foresees it, is the likelihood of a ‘politics of the armed lifeboat’, given that, already,

’the North is responding with a new authoritarianism. The Pentagon and its European allies are actively planning a militarized adaptation, which emphasizes the long-term, open-ended containment of failed or failing states – counter-insurgency forever. This sort of ‘climate fascism’ – a politics based on exclusion, segregation and repression – is horrific and bound to fail.’

‘Climate fascism’, with its camps, barbed wire and police omnipresence, is a likely outcome of climate (in)security.”

The embedded quote comes from Christian Parenti, ‘The Catastrophic Convergence: Militarism, Neoliberalism and Climate Change’, in The Secure and the Dispossessed: How the Military and Corporations Are Shaping a Climate-Changed World, eds. Ben Hayes and Nick Buxton (London: Pluto Press, 2016), pg 35.

Cara’s writing is also an index to leading women thinkers on the convergence of the gender crisis and the climate crisis. We meet people like Kate Manne and Sherilyn MacGregor. In the interview, Cara introduces us to them.

Kate Manne is the author of “Down Girl: The Logic of Misogyny”, (New York: Oxford University Press, 2017), which, among other things: “Explains and makes concrete predictions about common triggers and symptoms of misogyny in allegedly post-patriarchal settings.”

Sherilyn MacGregor, from the University of Manchester recently published “Zooming in, calling out: (m)anthropogenic climate change through the lens of gender” in “Climate Futures: Re imagining Global Climate Justice” (2019).

Speaking of smart women, I got the idea for this interview from an article by Emil Atkin, in her online climate newsletter called “Heated”. She wrote about “Proud Boys and petro-masculinity”. We are on the verge of authoritarian reaction.

See also “A green fatwa Climate change as a threat to the masculinity of industrial modernity” published in 2014 by Jonas Anshelm and Martin Hultman from Sweden’s Chalmers University of Technology. Or read this 2019 article “The Misogyny of Climate Deniers” in the New Republic about male climate “skeptics”, written by Martin Gelin.

Although I have been surrounded by feminists for decades, the new voices of ecofeminism still seem relegated to the margins, even in progressive minds. I wonder if that is because the information system, not just mainstream media but Facebook, Twitter and Google – are all founded and controlled by men. Why do we still struggle to hear feminist voices?

We talk about some of Cara Daggett’s new work. This summer she published “Energy and Domination: Contesting the Fossil Myth of Fuel Expansion”. Cara has another new one coming out in October with title “Toward Feminist Energy Systems: Why Adding Women and Solar Panels Isn’t Enough.” Then we have her 2020 book “The Birth of Energy” from Duke University Press.

Connect with Cara New Daggett at her web site.

JENNIE STEPHENS: THE PATRIARCHY CANNOT SAVE US FROM ECOLOGIC RUIN

The technology to change the climate of this planet arose in a white male-dominated society. A new book argues that same power complex cannot save us or Nature.

Dr. Jennie C. Stephens is the Director of the School of Public Policy and Urban Affairs at Northeastern University. Jennie has been a visiting lecturer at MIT and Post-Doctoral Scholar at the Harvard Kennedy School in Cambridge. Stephens received major research grants from the National Science Foundation and the US Department of Agriculture. 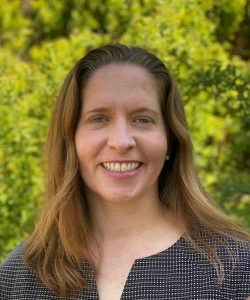 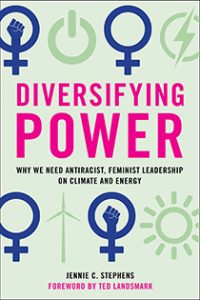 Our whole system of money, power, and technology could be described as a front group for continuing male dominance. It seems many white activists think we need to solve the climate crisis first, or basically die. Then later we can rearrange society for racial and gender equality. Stephens explains why the real world doesn’t work that way.

We begin with an example from Jennie’s 2019 co-authored paper “Embodied Energy Injustices: Unveiling and politicizing the transboundary harms of fossil fuel extractivism and fossil fuel supply chains”. She outlines undiscovered impacts from decommissioning “a coal-fired power plant in Salem, Massachusetts, and its replacement with a natural-gas-fired power station.”

After Hurricane Maria, Donald Trump threw rolls of paper towels to Puerto Ricans who were literally powerless. In the Forward to Stephens’ new book, Dr. Ted Landsmark points out big storms like Katrina, Sandy, and Maria brought more people of color into the environmental dialog. Can the movement for equality join the climate challenge?

This same crisis in leadership has been evolving within the environmental movement too. Greenpeace International realized wealthy countries led by white men was not going to save the environment. In 2009, South African Kumi Naidoo became Executive Director of Greenpeace International, followed by two women leaders in 2016. But I have heard from environmental organizations who are pro-actively trying hard to recruit people of color, and getting no applicants. We need to make the movement more attractive to diverse activists.

In my view, there are two key control points for continuing male domination. The first is religion – some are designed for male-only power . The second is not government, but control of the financial system – the multi-billionaires, super bankers and corporate owners. Should the call for antiracist feminist action go there first?

Prakash Kashwan from the University of Connecticut wrote a related article in The Conversation, published September 2, 2020. The title is “American environmentalism’s racist roots have shaped global thinking about conservation”.

Jennie is appearing in a widespread series of what I hope are virtual events, including with the University of Stavanger, Norway on October 1st; Hong Kong University; and a UMass Boston Symposium on Confronting the Climate Crisis: Feminist Pathways to Just and Sustainable Pathways on October 8.

Check out all our past programs free here at ecoshock.org – and my new book “Surviving in the New Age of Extreme Heat”. I’m Alex. That you for listening, and caring about our world.

Worse Than What You Heard →
← Hurricanes and Arctic Fires: A World Slipping Away Unnoticed
2 Comments