When the Weird Becomes Harder

Even during the pandemic, 2020 offers more wildfires, strong storms, heat waves, low sea ice and melting glaciers. NCAR Distinguished Scholar Kevin Trenberth and from the UK, Professor Mike Benton, two scientists at the top of their game, explain how we got here and where this goes. We cover it all from ice to ocean heat waves to mass extinction.

The ocean is a massive humbling beast that defines this planet. We are changing even that – and ocean warming may overpower anything that is happening on land.

Our guest is a widely known climate scientist. Dr. Kevin Trenberth is a Distinguished Scholar at NCAR – the U.S. National Center for Atmospheric Research. He also works with the University of Auckland. Kevin was a lead author of the 2001 and 2007 IPCC Scientific Assessment of Climate Change. Now as America roils in climate denial, disease and protest, Dr. Trenberth is back in his native New Zealand. 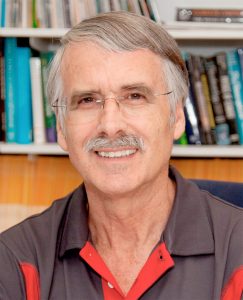 In the first decade broadcasting this show, I found it difficult to get precise numbers, or even solid news about how much the ocean is warming. Then last January we got this headline from sciencealert.com: “The Ocean Is Warming at a Rate of 5 Atom Bombs Per Second, Scientists Warn”.

Trenberth, lead author J.P. Abraham, G. Foster plus our recent radio guest Zeke Hausfather released a paper at the Fall Meeting of the American Geophysical Union. Then in 2020 Kevin worked with another team to publish the paper “Record-setting ocean warmth continued in 2019”.

So many reports and reporters are satisfied to know what the climate might be by the end of this century. Some say by 2100 warming of 3 degrees C over pre-industrial temperatures is likely and survivable. But ocean scientists know global warming does not stop for a nice rest in 2100. For me that human short-sightedness is part of the horror. The ocean will just keep releasing heat for centuries, no matter what humans manage to do.

I think that is why we have to aim for two degrees or under by 2100, just to leave some room for our descendants to survive, and all the plants and animals a little time to either adapt or move. Scientists and the media have to make this as clear as we can: we can not use up the whole survival margin during a single life-time of 80 years.

I would like to say the rest of the world can tackle climate change without the United States. But Russia is playing against climate science, and you can bet the Middle East oil and gas producers are not backing climate action. Even Australia wants to sell more coal, and India is glad to take it all. Canada has it’s climate-killing tar sands. Who really is on the side of the angels when it comes to fighting for our future, for our grandchildren?

I have another powerful interview on ocean heat waves coming up soon. Stay tuned.

MY QUICK NOTES FROM THIS INTERVIEW with Kevin Trenberth

1. our emissions are smaller than natural emissions but enough to disturb big natural systems

2. carbon dioxide continues to rise even through pandemic

3. wildfires may be part of the continuing increase

4. the energy imbalance on Earth due to greenhouse gases is 100 times greater than all electricity generated around the world

5. what matters is not excess energy at one time, but that is accumulates in the oceans, like a big heat storage battery

7. but that extra release of heat from the sea meant 2016 was warmest year on record in terms of global mean surface temp

9. in addition to ocean storage, heat accumulates by melting ice

10. marine heat waves are increasing in different parts of world – and see “Increase in the rate of ocean warming” led by J.P. Abraham with Trenberth, which led to this article in Rolling Stone.

11. warming in Gulf of Mexico allowed prediction in April of active hurricane season 2020

12. Chinese scientist Lijing Cheng and Trenberth say we should use ocean temperature to measure global warming as more reliable and important than global average mean temperature in the air [see “How fast are the oceans warming?” ]

13. Trenberth and Cheng just published a new paper in September updating salinity data for oceans [Alex says there are major ramifications from this paper, including a possible reduction of carbon capture by the sea as oceans warm and stratify…stratification will also reduce ocean mixing and oxygen, harming sea creatures large and small]

14. Ocean salinity shows key hydrological cycles like rainfall and evaporation globally; Trenberth has a new paper on changes in salinity. Places where the ocean is already salty are getting saltier; that affects ocean currents and rainfall

15. The oceans have a heat memory of at least a couple of centuries, and will continue to warm the planet even if our greenhouse emissions stop

16. In another sign of warming, and ocean warming, there are more unusual hurricanes/typhoons, including big impact tropical cyclones in Indian Ocean

17. But storms deaths down in Asia due to good planning/evacuation (Alex says: this hides a growing climate impact, as does heat planning, in terms of deaths)

18. Areas with a “Mediterranean climate” are expanding, in places like California and Australia, with drought and fires.

19. Kevin Trenberth is working on the new book “The Changing Flow of Energy Through the Cllimate System.” This follows his paper “Understanding climate change through Earth’s energy flows” published March 18, 2020 in the Journal of the Royal Society of New Zealand.

21. One of the reasons Dr. Kevin Trenberth left his position with the US National Center for Atmospheric Research (NCAR) – moving to New Zealand as a Distinguished Scientist, was budget cuts for climate science forced by the Donald Trump Administration.

“there is no vaccine against climate change”

22. Trenberth tells us the climate challenge will dwarf problems seen with COVID-19 – and “there is no vaccine against climate change.”

My previous interview with Dr. Kevin Trenberth was in September 2019.

If you enjoyed this interview, you can find another 20 talks with important minds in my book “Surviving in the New Age of Extreme Heat”.

MIKE BENTON – SLEUTHING THE DEEP PAST TO FIND OUR FUTURE

In this interview, we learn two fundamental climate lessons from the long history of Earth. Research finds destabilization of a climate can lead to strange states of weather beyond our imagination and lasting a million years or more. Second: we find yet another case, a new discovery, when global warming led to a mass extinction event. Apparently we are not in the sixth mass extinction so often cited, but the seventh. Life on Earth is less stable than humans realize.

Mike Benton is a Professor of Vertebrate Paleontology at the UK’s University of Bristol. He is a co-author of a new study published in Science Advances announcing the discovery of the new mass extinction event. It is not often we can say that. Benton is is co-author of the new study “Extinction and dawn of the modern world in the Carnian (Late Triassic)”. Mike takes us into the deep past with interesting insights, and always with a potential mirror to see possible futures. 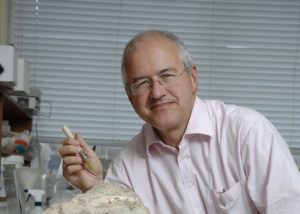 Until now, experts warned we are entering the Sixth Mass Extinction. I have done programs about it, starting with the 1995 book “The Sixth Extinction” by biologist Richard Leakey and science journalist Roger Lewin. Perhaps we must now say humans are driving the Seventh Extinction.

A MILLION YEARS OF RAIN

I often report about “strange states of weather”. One of the weirdest has to be the “Carnian Pluvial Episode”. Dr. Benton describes this for us. Elsewhere I read during this million-year-long rainstorm on this planet, it rained so much, for so long, that much of the Earth’s land surface was leveled as much as erosion can do. Keep in mind most climate models and scientists predict greatly increased rainfall in some parts of the world, as Earth’s atmosphere warms to hold more water, but nothing like the Carnian Pluvial Event is being predicted this time.

In 2018, Peter Brannen wrote an article in Atlantic magazine titled “A Climate Catastrophe Paved the Way for the Dinosaurs’ Reign” … “The need to understand strange events like the Carnian Pluvial Episode has taken on new urgency.” Brannen’s guide to that past when dinosaurs appeared in Europe was co-author Massimo Bernardi in the new paper with Mike Benton.

In the Atlantic, Peter Brannen wrote “The global water cycle could intensify by 24 percent by 2100.” Few of us understands what that means for civilization.After reading the new paper in Science Advances, I feel very uneasy. We humans are pushing Earth into a warming apparently faster than anything seen on the planet before. We are dangerously destabilizing a system that is much larger and meaner than we understand.

MY QUICK NOTES FROM THE MIKE BENTON INTERVIEW

1. The warming that drove a newly discovered mass extinction event (233 million years ago) was caused by a giant fissure in the Earth crust where the West Coast of Canada now lies. The black volcanic rock basalt poured out, along with tremendous volumes of greenhouse gases, mainly carbon dioxide.

2. There were several “pulses” of warming taking the planet 6 to 7 degrees C hotter. Benton later says “2 degrees is nothing” compared to early warming extinction events

3. The event led to acid rain and acidification of the sea

5. Ancient temperatures can be read from the rocks using oxygen isotopes, creating a calibrated “paleothermometer”

8. When the long-lasting eruptions of basalt in the West stopped, the world suddenly flipped from rain into a very dry phase. [Alex says: all this shows Earth’s climate system is less stable than humans have experienced, and can flip into very strange and hostile states.]

9. When so many creatures went extinct, a smaller group emerged to dominate the Earth: the dinosaurs

10. In the sea, small shell creatures, the dinoflagellates, began to transfer carbon to deeper water, which brought a greater stability to the carbon cycle

The image for this program: Pluvian dinosaurs by scientific illustrator Davide Bonadonna used with his kind permission.

Can you help me continue to produce this program, and provide it free to non-profit radio stations and listeners around the world? Due to economic hardship, a handful of my regular monthly supporters have to cancel their subscriptions – sending email of regret. If you are doing OK, please become a monthly donor to keep Radio Ecoshock going. Find out here.

Thank you for listening. Stay tuned next week for more breaking science about your world, as hard times become a challenging future.