Or listen to or download our guests as separate interviews…

24 HOURS OF REALITY: THE WORLD BROADCAST, DECEMBER 3 (4th in Asia and Australia)

Don’t miss this 24 Hours of Reality broadcast, live from Los Angeles, and around the world. It starts on December 3rd in America, or the 4th in Australia and Asia. It’s all begins in the evening in North America at 9 PM Eastern or 6 PM Pacific Time. Wherever you are, you can tune in and get connected. And keep checking in with the Climate Reality Project.

Have you figured out which climate risk is the biggest worry where you live? Maybe rising seas or hurricanes for coastal dwellers, or wildfires in the West? Ahh simple humans – climate disruption is not that easy. A new study paints a picture of a complex beast that changes our lives and our world in hundreds of ways, including the economy, crops, strange new pests and diseases, the lot.

A group of scientists from the University of Hawaii just issued a massive catalog and maps of the cumulative impacts of climate change. They called in other world experts, including our guest, medical doctor Jonathan Patz who serves as the Director of the Global Health Institute. He’s also a Professor in health and environment at the University of Wisconsin-Madison. 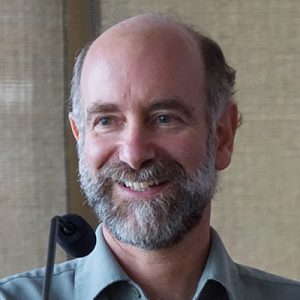 Patz is among the pioneering health scientists who created and developed the field of climate change health impacts since the 1990s. He has since trained a new generation of scientists in the field. His most recently published book, Climate Change and Public Health co-authored with Barry S. Levy, further describes the implications of climate change with a focus on the adverse public health effects

It’s been 8 years since our last chat on this program, so we welcome Dr. Patz back to Radio Ecoshock.

A “BROAD THREAT TO HUMANITY”

The title of this new paper is: “Broad threat to humanity from cumulative climate hazards intensified by greenhouse gas emissions.” The team considered almost 900 ways global warming can change the land, sea, and air. It’s amazing that hard evidence of 467 of them, with scientific reference proof, were discovered in relatively recent times. That seems like too much for the human brain to take in. The lead author for this paper is Camilo Mora, the prolific investigator of climate change, and twice a guest on Radio Ecoshock.

I think this new paper published November 19th in Nature Climate Change is a genuine landmark in climate science. But before we go there, we begin with our most urgent recent example: the terrible wildfires in northern California in November 2018.

Judging by comments in social media, and emails I receive, events like the California fire change people’s mental health. I ask Dr. Patz whether doctors are ready for the stress and mental illness coming as we face more harsh climate disruption. After the year-long drought in the Murray-Darling agricultural district of Australia, some farmers despaired and took their own lives. We know that Indian farmers have killed themselves after repeated crop failures. It’s not a pretty subject, but health experts expect more suicides as climate damage ramps up.

I think another underestimated health impact is the long echo of these severe events, whether it’s fires, floods, drought, or extreme storms. We see the damage to buildings and infrastructure. It is harder to see an illness that culminates years later from inhaling toxic smoke, or acquiring something like Lyme disease as ticks thrive in a warmer world. We discuss the delay factor.

This new study in Nature Climate Change comes with a cool interactive map. I can put my cursor over India, Scotland, anywhere – and see what the cumulative climate threats may be. It didn’t look that bad even in the year 2100. Just as I was thinking “we can survive this” – I realized the map defaults to the best-case scenario. That assumes we capture and store gigatonnes of carbon out of the air. Setting the map to our real current pathway, the RCP 8.5 “business-as-usual”, it looks like continuing disasters all over the world. Over 3,000 documented case examples, with supporting papers, are listed here.

Some people will use this cumulative impacts map to find a safer place to live. I get the feeling we will all be thinking about that. Survivalists and preppers are going to love this interactive map, and maybe young parents too. Is it time to reconsider where we live?

Penn State scientist Micheal Mann was not part of this study, but he reads it as another sign that it is not too late for action. This massive report shows our future could be much worse, but we can still act to avoid catastrophe.

In the interview, Dr. Patz raised the problem of rising seas and miscarriage – and here it is in the latest news! How climate change could be causing miscarriages in Bangladesh, published 26 November 2018.

Check out this quote from the new paper:

“Furthermore, we showed that projected exposure to multiple climate hazards will be very similar between rich and poor countries, but variations in adaptive capacity will probably result in different types of impacts (for example, higher economic loss for developed nations and higher loss of life for developing countries).”

We all tend to think about where we live. As scientists tend to focus on one specialty at a time, it seemed like each of us could almost pick our climate impact. For me it’s wildfires. For coastal Delaware or Bangladesh the big climate threat is rising seas. There that is simple. Except actual experience on the ground, and news reports, show multiple climate hits in many places, and this is still early days in the climate shift. We are good at focus on a single thing, and progressively worse at understanding complex processes that interact. Because of this, we may not really understand climate disruption, or realize the many ways it is affecting us.

The experience of Florida in 2018 illustrates the more likely truth: we will have to live through multiple impacts, and some are more subtle or delayed. For example, a drought in Africa may be followed by torrential flooding, which then results in more deaths by diseases. All of these may be worse or more likely due to climate change. Is health always the follow-up impact, the secondary development? After being weakened by drought, then crop failure, then hunger, finally disease appears?

Here are two mainstream stories about the new paper on cumulative climate impacts, from the New York Times (subscription may be required) and from USA Today.

Climate in the Sixth Extinction

Climate in the Sixth Extinction
Posted on January 28, 2010

I interview Dr. Jonathan Patz, a physician and lead author for the IPCC, on health and climate change. He is now advising emergency doctors and disaster agencies on what to expect as climate disruption proceeds. That Patz interview from 2010 is 19 min available here.

THE RETURN OF THE TOXIC MONSTERS: DR. KIMBERLEY MINER

When buildings and cars burn, as they did in Paradise California, a host of toxic chemicals are unleashed into the smoke. That toxic smoke can travel hundreds of miles or more. Like mega-fires, hurricanes can also create a storm laden with toxic chemicals we have tried to forget.

Long-lived and long banned chemicals are emerging back into our environment, as another unplanned feature of climate change. Kimberley Rain Miner is a Research Assistant Professor at the Climate Change Institute, at the University of Maine. After Hurricane Florence hit the Carolinas in September, Kimberley Miner and two associates issued a warning. Published as a Letter in the journal Science, the title is “Preventing Chemical Release in Hurricanes“. The new reality is stranger than you think – and it goes way beyond hurricanes. 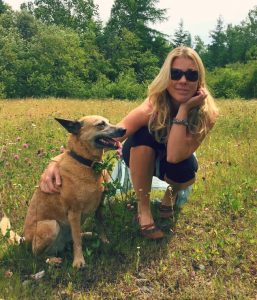 Check out this article in Popular Science, published August 23, 2018: “What happens when a hurricane unleashes toxic chemicals? The EPA is putting off figuring it out. Judges just ordered the agency to stop dawdling” by Jennifer Lu. In our Radio Ecoshock interview, after we discuss the risk of toxins being liberated by hurricanes, we move to Kimberley’s work on another way that long-lived toxic chemicals return to us, driven by climate change.

Danish scientist and ice specialist Jason Box released photos showing glaciers on Greenland turned dark gray. The cause was polluted dust from the industrialized northern hemisphere landing on the ice. That dust contains all the nasty pollutants from the decades BEFORE we woke up and banned many of them. As Kimberley and a group of Swiss scientists report: “Persistent organic pollutants (POPs) are entrained within glaciers globally, [they are] reemerging in many alpine ecosystems.”

PCBs, for example, were used in electric transformers and many other industrial applications, until they were banned in the late 1970’s. PCBs lead to cancer. We like to think that once something is banned, that’s it, they are out of the system so no worries. But wait: the reason PCBs and other “persistent” organic compounds were used is precisely because they DON’T break down. Some last centuries. So all those long-lived chemicals are still out there. Some accumulated in glaciers. Now in a warmer world, glaciers are melting, letting it all back out again.

Kimberley and a team of Swiss scientists tested a Swiss glacier and found POPs in the downstream water, enough to affect kids and pregnant women at least. It turns out the European Alps have wind and weather systems that tend to accumulate toxic materials. Perhaps other glaciers are not as polluted (we don’t know, the science has not been done). But it does make you wonder about the purity of all that bottled “Glacier Water” on sale. You can’t taste or smell things like PCBs. Only independent testing can tell. Is that testing being done?

As the world warms, scientists predict the end of glaciers outside the polar regions. Ice-sheets all over the world, from the United States to the Himalayas, are beginning to melt. Does that suggest a second release of chemicals harmful to countless people living downstream?

The paper we talked about is: “Quantitative screening level assessment of human risk from PCBs released in glacial meltwater: Silvretta Glacier, Swiss Alps“. If you are curious about the Silvretta Glacier, the Wikipedia entry is here.

My deep thanks to those who donated to Radio Ecoshock last week. I’m about half way to what I need to cover costs over the Christmas break. Often people don’t give during December, so I need to have money in the bank to carry the show at least to the end of January. If you can help, please do.

Meanwhile, I work as hard as I can to contribute the science and views we need to grasp what is happening to the climate – and the entire ecosystem that was built for this climate. I also thank the many volunteers at the 100 non-profit stations that broadcast Radio Ecoshock – and the scientists and other experts who give us their precious time to help you and I understand.

As always, thank you for listening, and caring about our world.