All channels are stuffed up with Trumpist distractions and sex scandals. In all our lives in the so-called information society, we do not know how our bodies react to heat. And planet Earth is erupting in heat waves, with tens of thousands dead at a time, with more to come as warming rules. In this program you will learn how heat kills and your own risk. We’ll also hear a warning from 15,000 scientists. That crested the serious newspapers for a few seconds: a second warning to humanity. We’ll hear from the man who started it. It all wraps up with a short chat with a young futurist, about sponge cities.

If you have a body, and believe more heat waves will come, you need to hear this interview. We are going to explore new science with a title that is starkly clear: “Twenty-Seven Ways a Heat Wave Can Kill You: Deadly Heat in the Era of Climate Change”.

In April 2017, I interviewed Dr. Camilo Mora. He led a team of 14 scientists from the University of Hawaii. They concluded that somewhere between 2033 and 2070, nothing will be the same in a hotter world. That is when Earth will get a whole new climate.

That work is titled “The projected timing of climate departure from recent variability“, published in the journal Nature. Be sure to check out the maps in the Appendix to this paper. They are pretty clear even for the non-scientist.

You can listen to that earlier Radio Ecoshock interview with Camilo Mora, April 12, 2017 in CD Quality.

Humans are already dying by the thousands, by the tens of thousands, in deadly heat waves. We don’t know when that may become millions of deaths in a hotter world. In fact, until a work just published by Camilo Mora’s team, nobody had studied all the ways our bodies react to excess heat.

Camilo Mora is from the Department of Geography at the University of Hawaii Manoa, where he heads the Mora Lab.

In school, we learned the basic organs and maybe a little on circulation. If we get a disease or disorder, maybe we find out about that. But isn’t it amazing that most of us don’t know why heat is dangerous for our bodies?

In 2008, I broadcast a recorded a briefing for Congressional staffers about how smog kills. Dr. Joel Schwartz, Harvard’s top pollution expert, suggested we don’t know how many deaths are caused by smog, because the death certificates never say that. Often it’s listed as heart failure. There the same lack of statistics, and underestimation of the number of heat deaths.

Part of the problem: Dr. Mora tells us heat may not kill right away. In fact, there is a well-known “harvest effect” where the deaths come in days or weeks AFTER the heat wave. The organs, he says, can be damaged by excess heat, almost like an internal sunburn. That damage may lead to death some time later, maybe even after a year has passed.

We get a great description of how this all works, starting with the rush of blood toward the skin to cool it off. But that steals blood from important organs. If it’s too hot, and the blood can’t cool, then those organs can be damaged by lack of blood, lack of oxygen, and toxic biproducts that form. It’s a great description from Dr. Mora, I hope you heard it.

Now it’s time for a confession. I love the heat. During the summer we often get up to 40 degrees Celsius, or 104 degrees in the shade Fahrenheit. I like to go out for a slow walk in the heat. But now, reading this paper about the further impacts of exercise in hot weather, I’m not so sure.

Even in electrified countries, tens of thousands have already died during heat waves in Europe and Russia. Most Americans have forgotten about the Chicago heat wave of 1995. Over 700 people died of heat in five days. They parked refrigerator trucks beside the overflowing morgues. One factor in Chicago: fear of crime. Seniors died inside because they were afraid to leave a window open.

This is another important result of this new study by Mora et al.: we used to think that heat waves were only a concern for seniors, the sick, and toddlers. Now we now that no one is immune, even healthy middle-aged adults can die from heat.

Camilo Mora is the lead author of a new paper published in the American Heart Association journal “Circulation: Cardiovascular Quality and Outcomes”. The title is “Twenty-Seven Ways a Heat Wave Can Kill You: Deadly Heat in the Era of Climate Change.” It is an open-access paper.

See also this article from Vice.com.  Also, see this new study on climate deaths, just out.

Twenty five years ago, the scientists warned us: humans were heading on a trajectory toward environmental disaster. 1700 of them, including most of the Nobel prize winners, issued the “World Scientists’ Warning to Humanity”. It was 1992, the time of the famous Earth Summit in Rio de Janeiro Brazil.  (I was there.)

Now our situation is much worse. More than 15,000 scientists from 184 countries have issued the “World Scientists’ Warning to Humanity: A Second Notice“. It was just published November 13th in the journal Bioscience, and it’s being echoed around world media.

William J. Ripple is the lead author. Dr. Ripple is a Distinguished Professor of Ecology at Oregon State University in the Department of Forest Ecosystems and Society. He’s also a pretty well known expert in biology and ecology generally, especially for his work revealing the important role of predators, like the wolves of Yellowstone Park.  We reached Bill Ripple in Corvallis Oregon. 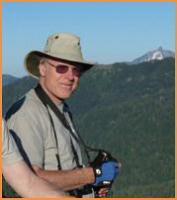 According to Wikipedia, “Ripple heads the Trophic Cascades Program at Oregon State University, which carries out several research initiatives such as the Aspen Project, the Wolves in Nature Project, and the Range Contractions Project.”

As summarized by a press release from Australian National University, this warning contains these stark facts:

“Among the negative 25-year global trends noted in today’s article are:

As I understand it, this big declaration by over 15,000 world scientists is not predicting that humans will become extinct. It’s phrased in terms of preventing “widespread misery and catastrophic biodiversity loss.” But if we can’t contain all these negative trends, I think a lot of humans are going to die, maybe mass deaths during this century.  Of course, we could make a determined try to do all we can to avoid it.

In the summer of 2017, the heaviest rainfall in a century hit the German capital of Berlin. It was another of the extreme rainfall events striking around the world. In Berlin, streets and buildings flooded but it could have been worse. Berlin is working to make itself into a “sponge city”. As climate disruption becomes real, China is planning on building 30 of them. I found that out from Chelsea Gohd.

Watch a You tube video of Berlin as a sponge city here.

If Bill Gates is building a new smart city, or technology is emerging to move you ten times faster, that is Chelsea Gohd’s beat. She is a science journalist and associate Editor at futurism.com.  You can find a web site of Chelsea’s work here. Or follow her on Twitter.

Just like Berlin, China was drenched with extreme rains last summer. Landslides and floods killed more people. According to The Economist magazine, the number of floods in Chinese cities has at least doubled since 2008. China has an ambitious project to create a lot of sponge cities. They are not building new cities, but reworking all the water flows in existing cities, including Shanghai. So this is a world-wide movement to adapt to the extreme rainfall events becoming more common as the globe warms.

Read Chelsea’s article “China is Building 30 ‘Sponge Cities’ to Soften the Blow of Climate Change” here. Or check out this more detailed article in Business Insider by Leanna Garfield.

But Chelsea has another persona: she is also a developing song writer, under the name FoxAnne. Her newest release is called “Queen of the Lost Boys“. The clip featured on Radio Ecoshock is the radio premier.

Check that out new song from Chelsea Gohd here.

That’s it for me, after another busy week. In our next program, I’ll have two top experts on the ways climate change can threaten your health. Don’t miss that.

If you can help me with the costs of producing and distributing this program (and maybe even a couple of meals for me) – please consider becoming a monthly subscriber, or making a one-time donation. It all helps keep me alive, and Radio Ecoshock going strong. Get the details here.

Thank you for listening, and caring about our world!

Beyond the Threshold →
← Has Your Doctor Told You?
4 Comments