Cracks in the Big Picture

SUMMARY: Climate scientist Paul Beckwith will tell us why sea ice around the world is in retreat, and what it means for our weather. Is it a planetary climate emergency? From the Center for Negative Carbon Emissions, Dr. Klaus Lackner explains capturing carbon from the atmosphere. It may be our best chance.  Radio Ecoshock 161130

Those arriving by phone can start listening now by using this link.

Get ready. We’re going to visit the hot Arctic, where the winter sea ice is almost refusing to form. It’s at a record low for November. Climate scientist Paul Beckwith will tell us why sea ice around the world is in retreat, and what it means for our weather. Yes we get to Trump, the chances of hope, and the planetary climate emergency.

Then something completely different. From the Center for Negative Carbon Emissions, Dr. Klaus Lackner will explain our options for capturing carbon from the atmosphere. It may be our only chance to save the climate we need to survive.

In the summer of 2007, you could hear the thud of scientists’ jaws dropping as they watched the Arctic sea ice almost vanish. It was a world wake-up call on global warming. This year, as we languished in the media tsunami of the American election, there has been another great turning point. It’s like a climate change siren, blaring from the dark Arctic sea, and we are too far away to hear it. But know it or not, we will suffer the consequences.

Here to explain is one of our favorite climate scientists and Arctic watcher, Paul Beckwith. Paul has two Masters Degrees, he’s working on his PhD on extreme climate change. He teaches at the University of Ottawa in Canada, and he educates us all with his YouTube videos.

In a nutshell, here is the problem. The Arctic is very much hotter than normal in 2016. In fact, this may be the first year in recorded history the annual average mean temperature in the Arctic will be over the freezing mark. Arctic temperatures in October were the hottest ever recorded, and it looks like another record will be set in November.

This is the time of year when the covering of sea ice should be rapidly forming. It’s not. Unless a super deep-freeze sets in later this winter, that could mean (a) thinner ice next year and (b) less ice coverage during next summer. That reduces the amount of heat reflected back into space by sea ice, which means the darker Arctic Ocean, and the planet generally, received more heat.

Fairly recent science says that lack of sea ice also means the Jet Stream, and the Polar Vortex, will be disturbed, forming unnatural bends, tending to settle for longer, moving slower. That disrupts the weather in the Northern Hemisphere even more than we have already experienced. Look out.

Paul explains the science behind this so neatly and clearly. I highly recommend this interview. Even though I’ve talked with a lot of scientists, and research this stuff daily – I still learned brand new things from Paul as we talked. It seems like a lot of loose threads come together to form a pattern we can all understand.

LINKING UP WITH PAUL BECKWITH

Paul learned a lot from the late scientist Stephen Schneider. Stephen wrote the book “Science as a Contact Sport” to encourage climate scientists to communicate to the public, to teach us what we need to know, on the run as it were.

Paul mainly does this through more than a hundred You tube videos he’s posted. Try this 3-part series “Our Climate Change Emergency & Three-Legged Barstool Survival.”
Here is Part I.

This isn’t just the Arctic. In the second video he says Antarctic sea ice is at record low levels. So that doesn’t balance out what is happening in the Arctic. Antarctic Sea ice was at a record high in 2013. Global warming deniers loved to tell us that, as though what happens at the South Pole could make up for the massive changes at the North Pole (that’s nonsense, it can’t!. But Antarctic sea ice is much lower this year. It’s weather weirding Paul says, as we jump from one extreme to another.

Of course you can get a guide to Paul’s work and all his latest videos at his web site at paulbeckwith.net I also follow his Facebook page here.  It’s a great climate news feed.

It looks like we are headed for a different and a difficult climate – unless humans can reverse our pollution by grabbing greenhouse gases out of the sky.

Recently on Radio Ecoshock, Dr. Kevin Anderson explained the hazards of counting on carbon capture and storage, as we continue to pollute the atmosphere. His paper was published in the journal Science in October 2016. On November 11th, Science published a reply, with a more positive view of carbon capture. Klaus Lackner is listed as the lead author, but only because the journal Science doesn’t have the capability to list 46 authors on one article. Lackner points out he just represents a whole team of dozens of scientists who co-signed this reply to Anderson.

You can read this letter in Science “The promise of negative emissions” as published November 11, 2016 here. The response by Kevin Anderson and Glen Peters follows it.

Dr. Klaus S. Lackner is the the director of the Center for Negative Carbon Emissions and a professor at Arizona State University. Lackner got his doctorate in Physics, at Germany’s Heidelberg University. He started in atomic work, including a period at the Los Alamos National Lab. Then Klaus branched into climate research, including contributing to a report on carbon capture and storage for the Intergovernmental Panel on Climate Change. 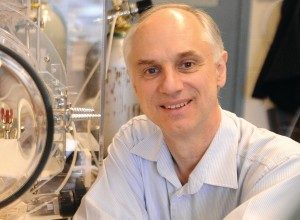 The Anderson team is critical of BECCS, the “bio-energy with carbon capture and storage” plan. They begin with the vast amount of land that would have to be either removed from agriculture, or from natural spaces, to grow biomass on the scale required to power civilization.

My take from talking with Klaus Lackner: he agrees that BECCS is just a part of the puzzle of how to reduce carbon in the atmosphere. There are limits, and that is why his team is working on other solutions which can capture carbon directly from the air. For example, the BECCS idea of taking carbon from power plants does not account for the massive emissions from all other sources – such as the tailpipes of our cars. We need other tools in the tool-box.

There’s a lot out there.  You may have heard of artificial carbon-sucking trees.  Klaus Lackner describes how these work.  Even dumping iron into the ocean to stimulate plankton may help capture carbon.  We’re not sure if that carbon really gets entombed on the ocean floor, but that’s the theory to be further tested.  There are rocks that attract carbon.

But Lackner tells us carbon capture and storage is not just a neat technology that IPCC scientists dreamed up to balance the books. We will do it, he says, because we absolutely must. The only questions are: (a) will we find a large-scale carbon tech in time and (b) will it be implemented in time. The first question may be easier. The second involves all kinds of political and social problems – like politicians who deny climate change is a problem worth solving! (Not mentioning any names, Donald).

How can we put carbon back into the ground, so that it stays there, hopefully forever, if not for thousands of years? We just saw a deep storage well for natural gas blow out at Aliso Canyon California. They couldn’t stop it for four months.

What happens if a carbon storage facility leaks? Klaus says we are just back where we started, with carbon back into the atmosphere that was there before. At least, unlike Aliso Canyon, carbon dioxide is not toxic, nor is it explosive. But the inability to find reliable long-term storage for nuclear waste shows us how tough this challenge may be. I would also hope for storage that works passively – that is, that would not depend on a highly technical civilization to maintain it. Civilizations come and go, but the carbon has to stay down there.

I’m loaded with concerns about this whole field. For example, could the Paris climate agreement begin with such low demands for reducing national emissions, if they did not assume carbon capture technology in the future? Another worry is that if carbon capture doesn’t work, we will have waited too long to make the cuts needed without it. But as Lackner says, at this point, it’s either do or die, if we want to get back to the safe line of 350 parts per million that James Hansen and 350.org suggest.

To find out more, in addition to his own research center, Klaus Lackner mentions the negative emissions work being done at Global Thermostat.

So here we have it, the incoming leader of the alleged free-world, President-elect Donald Trump on climate change:

You can hear that Trump quote, plus an interview with Robert Walker on CBC Radio’s “The Current” found here.

Trump’s “senior advisor” former long-time Republican Congressman from Pennsylvania, Robert Walker, told the Guardian newspaper and Canada’s CBC Radio that the Trump administration would cancel all climate change monitoring and research funding at NASA, the world’s premier operator of the satellites and science. Make it go dark, that should solve the problem.

If there is intelligent life anywhere in the universe, we need it now.

SO MUCH CLIMATE, SO LITTLE TIME

We covered so much in this show. Yes, I know the blog is way too long. I hope you can scan through to find the links you need. Please take time to explore. There’s everything at stake.

In these times of denial, it’s my honor to represent you, at the sources of science and reality. Thank you for listening, and for caring about our world.

Please support Radio Ecoshock if you can. Details here.