Can We Avoid A Collapse?

FREE DOWNLOADS FOR THIS PROGRAM

I’ll call Tasmania to learn why it burned and why climate-driven fires threaten all of us. Our guest is world-recognized fire expert David Bowman.

Then we’ll investigate why the Obama Administration is rushing to sell off oil and gas rights on the dangerous Outer Continental Shelf. Is that fire-sale meant to fatten a Ponzi scheme of big oil stock prices? Economist John Talberth explains why his group, The Center for Sustainable Economy, is suing the government.

But first Stanford’s eminent biologist Dr. Paul Ehrlich (author of "The Population Bomb" and a dozen more) on his new scientific paper, published in the Proceedings of the Royal Society. The title of this peer-reviewed paper is "Can a collapse of global civilization be avoided?"

PAUL EHRLICH: CAN COLLAPSE BE AVOIDED?

I’ll bet you know who Paul Ehrlich is. But just in case: he’s a Professor of Population Studies at Stanford University, and president of Stanford’s Center for Conservation Biology. Maybe you know him for the world-famous book co-authored with his wife Anne, the 1968 classic "The Population Bomb". Since then Paul, with Anne and other authors, has published dozens of books. In February 2011 we interviewed Paul for his latest: "Humanity on a Tightrope", written with Robert Ornstein.

Climate change is on our minds, especially as America comes out of it’s hottest year ever, and Australia burns. Yet there are other big threats out there. In fact, I counted nine developing ecological nightmares in Ehrlich’s paper, not counting climate change or over-population.

We can’t talk with Paul Ehrlich without population. Humans cannot multiply forever. But population is not the focus of this interview.

A good part of this Ehrlich paper is devoted to food production. The Ehrlichs have some suggestions on what could be done to avert a crisis. No food crisis for you? There is for more than a billion humans who do not have enough food today. It could get worse, threatening global stability.

I have to pose an inconvenient question. I interviewed Dr. Timothy Garrett from the University of Utah. Two years ago, he published a scientific, peer-reviewed paper showing only a complete collapse of our fossil-based civilization, right now, could avoid crushing climate change. We are a deadly species creating a mass extinction event. Maybe we should help this suicidal system collapse, instead of trying to save it?

Paul told Stephen Leahy of the Independent Press Service "We are all scared." The people frightened are not just scientists, but anyone who either has the expertise, or educates themselves, on the various challenges to our civilization, a system which is far more fragile than we want to believe. By the way, I wouldn’t have found out about this paper without the independent environmental journalist Stephen Leahy. Please visit his web site, and support his efforts.

There is far too much to this interview, with one of the grand older men of science and popular culture, to list here. Please listen for yourself. 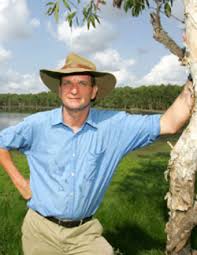 Sydney and Melbourne his more record highs this week, as the Australian super heat wave continues. This is our future friends – so let’s tune in for a listen.

The image of kids in the water clinging to a dock, under a fire-red sky, captured the situation. The great Australian heat wave of 2013 also struck the southern-most part of the country, the island of Tasmania. Maybe this is the future anywhere trees grow, as global warming heats the planet.

Professor David Bowman is at the University of Tasmania in Hobart, teaching and researching Forest Ecology. He’s a published expert on fire in the earth system.

When Dunalley Tasmania burned, Bowman was out of contact in the bush. He told his research team fire conditions were catastrophic, the worst he’d seen. Just last year Bowman was so concerned about the growing fire risk, he wrote the media a warning (which was ignored).

Listen to the 20 minute Radio Ecoshock interview with David Bowman.

While the public thinks a couple of wet seasons after a drought is a good thing, forest experts around the world know that is the most dangerous time. The rain creates new fuel for bush fires – which are more likely as the planet heats up.

It gets worse when slow-growing tree species get burned over in relatively quick succession. Fires that would normally return in perhaps 75 years come back in 5 years. Bowman says some forest ecologies in the Southern Hemisphere are converting toward super fireweed species. For example the Australian Alps are in danger of an ecosystem change.

The climate impacts from fire soot has also been underestimated in climate models, Bowman suggests. The black particles absorb the sun’s heat, raising warming. Fire smoke is a complex mix of chemicals which are also responsible for many deaths around the world. Much more needs to be understood about them.

We also discuss the extreme fire risk of the trend to plant Eucalyptus trees around the world, including in California and the Mediterranean. The Eucalyptus, Bowman thinks, may be a real fire tree.

David Bowman has also been working with an extended family of aboriginal people in Northern Australia over the past 15 years, trying to learn what they know about fire. That relationship is unique, with fire being a part of aboriginal culture. Too bad the colonists didn’t learn from them.

Learn a lot in one short interview. This kind of fire becomes a positive feedback effect on the climate. More fires lead to more warming, which leads to more fires.

John Talberth is the senior economist for the Center for Sustainable Economy, which is based in New Mexico.

Why Is the Economy Shrinking? – Richard Heinberg →
← A Warning From the Future
3 Comments