The super warming gas methane more than doubled in the atmosphere since 1750. Since 2007, methane is rising again. It threatens to undo previous climate agreements and make the world much hotter, sooner. Where is it coming from? Are we experiencing a methane emergency?

Dr. Euan Nisbet and his team lead the world in tracking methane. Under a UK program called MOYA, scientists in all corners of the world carefully capture flasks of air for Professor Nisbet’s lab at Royal Holloway, University of London. Nisbet flies sampling aircraft over remote bogs in Africa, South America and the Arctic. Add in satellite data, and a global methane picture emerges. 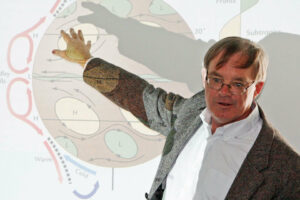 Listen to or download my 32 minute interview with Dr. Euan Nisbet in CD Quality or Lo-Fi

Listen to or download the 27 minute interview about PLAN, by Brent Ragsdale, in CD Quality or Lo-Fi

From London, we welcome Euan Nisbet, back to Radio Ecoshock. Actually, Euan is based in London at Royal Holloway, but I managed to connect with him on vacation in Scotland.

Methane is a tiny fraction of the atmosphere. It is measured in parts per billion. But methane can influence the climate of the whole world.

Seeing dangerous changes in the atmosphere, the Royal Society scheduled a Discussion Meeting for October 2020. The general topic: “Rising methane: is warming feeding warming?” That was called off due to the pandemic, but then held in October 2021.

This Discussion resulted in a flurry of papers on methane, many led or co-authored by Euan Nisbet. The groups tackles questions burning in the minds of many listeners. Let’s start with this. In the opinion of leading scientists, we are in a methane emergency. That is in a scientific paper published by the Royal Society.

“In British law, an ‘Emergency’ is ‘an event or situation which threatens serious damage to human welfare…, the environment of a place…or…serious damage to…security’. Dictionary definitions typically add the words ‘unexpected’ and ‘sudden’. As the rise in the atmospheric methane burden meets all those criteria, there is indeed a methane emergency.”

There are questions about where the increasing wave of methane coming from. The Arctic Methane Emergency Group, and two Russian scientists point to the Arctic. The Nisbet team meta-studies, and others from Rob Jackson at Stanford Earth, discount Arctic emissions as a prime source for growing methane, at least so far. Here is how they know:

Carbon comes in two primary forms, and one rare radio active type (isotope). There is Carbon-12, the most common, Carbon-13, and then the rare Carbon-14 used in dating ancient artifacts. As I understand it, fossil fuels have a higher ratio of Carbon-12 than methane from plant decomposition, like from bogs and wetlands. By measuring the ratio of the isotopes, scientists can determine that while some increasing methane is coming from fossil fuel production (especially leaking wells and pipelines), a greater amount of the INCREASE is coming from the tropics.

A new study in the journal Science used EU satellite data to find super methane emitters from oil and gas basins in Russia, the United States, Central Asia and more. So-called “natural” gas promises to be the clean fuel of the future. But it is almost pure methane, and leaking methane badly at every step from wells to our kitchen stove. Do you think some scientists and governments would rather talk about methane from tropical wetlands than point to the gas industry? Is it pointless trying to control super-emitters, like leaky pipelines, when growing millions demand more energy and world banks fund more production of dangerous fossil fuels?

I don’t pretend to understand the mechanics, but I do rely on the scientific methods used by Euan Nisbet and a team of scientists all over the world. They have been meticulously collecting flasks of air from all over the world, including some Arctic stations. Nisbet has personally flown over wetlands in South America, Africa and Russia to measure methane in the air. All of this can be correlated with newer measurements of atmospheric methane coming from satellites. The totality of methane measurement rises to the level of facts, not models or opinion.

As Nisbet points out in a Philosophical Transactions paper, “the tropical nations are not simply bystanders, as they largely are for CO2.” Nisbet, by the way, is from Africa and has a lot of connections there. He knows giant wetlands that are hard to find on Western maps, but cover massive areas in East African countries. These may be the largest sources of increasing methane on the planet. We do not know exactly why. There may be climatic links in more heat, extreme rainfall events, or even changes to the wind due to ocean currents. A lot more research is needed for the causes, but we do know these wetlands are major sources of methane, and there isn’t much if anything humans can do about it.

One paper with Nisbet as co-author says:

“There is strong evidence to suggest increasing tropical biological sources such as ruminants and wetlands are major drivers of methane’s recent growth. Growth in tropical methane emissions is consistent with a widening of regions experiencing tropical climate, land-use intensification and rapid population rise coupled with explosive urban growth.”

More methane in the atmosphere means Earth will get hotter and more unstable faster. As the major effects of methane lasts less than ten years, as Nisbet tells us – that means the impact of increasing methane will likely be felt during this decade! That methane will then break down, which produces more carbon dioxide, which matters more in the long-term.

All that forces humans to re-arrange our fanciful “carbon budgets”, meaning the amount of fossil fuels we can still burn. David Spratt of Climate Code Red says actually, we have no carbon left to “spend’ and still have a safe climate. He has good numbers to back that up. Whatever the case, increasing methane definitely demands we speed up decarbonization – and prepare for more extreme climate-driven shocks showing up in storms, species extinction, and all-out heat waves.

Suppose in 2028, multiple heat waves kill a lot of people and crops, endangering world food supplies. The public demands action. Is there a quick fix, like geoengineering? Actually, no. Some scientists suggest we could put up an emergency blanket of particles reflecting sunlight, to cool the planet, as major volcanic eruptions did in the past. This is untested, and only works as long as someone can put thousands of planes in the sky non-stop. Check out my interview with Wake Smith for more on this.

Fixing the Climate: Hopes and Hazards

Governments and the United Nations are arriving late to the methane emergency. We discuss the Global Methane Pledge signed by some countries at the COP26 climate meeting in Scotland. I find it completely insufficient, but Euan points out the 1987 Montreal Protocol to limit Chlorofluorocarbons (CFCs) damaging the ozone layer, was also just the beginning. The real teeth of the program were developed a few years later in the 1990’s with follow-up meetings (e.g. London, Nairobi, Copenhagen). The same may happen with methane, in which case Nisbet sees this Methane Pledge as a good start.

A July 2020 paper led by Rob Jackson, with Australia’s Canadell as co-author, concluded methane is helping push the future into the worst case scenario considered by the United Nations, to 4.5 degrees C. of average mean temperature rise by the year 2100. Today’s ten-year-olds could experience that catastrophe. We are sleep-walking into climate disaster! Being human, I fear short-term heating effects from methane more than the centuries of climate warming due to carbon dioxide.

MY PREVIOUS SHOW WITH EUAN NISBET

A PLAN TO GET THE BIG PICTURE-

You may think climate scientists understand climate change. But that is far too small a picture for reality. Sure there are feed backs from methane and ice melt, but social feed backs may play as large a role. That requires many disciplines, from historians through psychologists and more. Even Astrophysicists are getting involved.

Brent Ragsdale is a volunteer producer for Eco-Radio KC, the environment program broadcast by KKFI Kansas City community radio. Brent contacted me about his interview of two scientists helping to found a new plan to integrate experts in many fields into building the climate big picture. The published the paper “Modernity Is Incompatible with Planetary Limits – Developing a PLAN for the future”. That is in the top-rated journal “Energy, Research & Social Science”, published November 2021.

Listen to or download the 27 minute interview about PLAN, by Brent Ragsdale, in CD Quality or Lo-Fi

Here is the Abstract from that paper, which forms the topic of discussion for this interview:

“This age of modernity is characterized by consistent growth in energy use, economic activity, and resource consumption, and a generally increasing standard of living—albeit inequitably distributed.

All currently living humans, and most academic disciplines, have developed in this age, which appears normal and indefinite to us. But modernity has been enabled by the rapid and accelerating expenditure of our one-time inheritance of fossil fuels, and by drawing down the resources and ecosystems of our finite Earth—none of which can be sustained as we transition from a resource-rich frontier to a human-dominated planet.

Climate change is often singled out as modernity’s existential crisis, but it is only one of a series of interlocking challenges constituting an unprecedented predicament that must be understood and mitigated in order to live within planetary limits. While energetic and technological challenges attract significant attention, arguably the greatest challenges are conceptual or even cultural.

In particular, as we review in this Perspective, today’s political economy has been designed to value short-term financial wealth over the real treasure of Earth’s functioning ecosystems, to discount the future at the expense of the present, and to demand infinite exponential growth…which is simply impossible on a finite planet.

Given all this, humanity should view its present overshoot-prone trajectory with tremendous suspicion, humility, and concern. We call for the establishment of a transdisciplinary network of scholars from across the entire academic landscape to develop a global understanding of planetary limits and how humanity can adapt to the associated realities. We present a set of foundational principles to serve as a starting point to anchor this network and drive a new area of focused inquiry to develop a shared vision of viable future paths.”

Brent Ragsdale is a Mechanical Engineer who aspires to be a part of the energy transition. Thank you Brent for contributing this interview for Radio Ecoshock listeners! Check out Eco-Radio KC here.

Next week we will kick one of the most sacred of cows, and cover the huge fossil fuel party going on at world banks. Be sure to tune in.