China passes America to build a new world order. But climate disrupts the Big Game: author and historian Alfred W. McCoy, University of Wisconsin-Madison on his new book “To Govern the Globe, World Orders and Catastrophic Change”. Direct from the Yukon, broadcaster “Radio” Rob Hopkins with the view from the North.

Remember normal? You grew up in a world with fractures and tensions but over-all, there were rules, and agreements spanning human settlements. Power in the world order is shifting again, but this time the long history of empires and geopolitics is hitting a wall. It is not just the COVID attack from the micro-world. According to scientists, all species are approaching the possibility of mass extinction as the world heats up.

Alfred W. McCoy is the Harrington Professor of history at the University of Wisconsin-Madison. He is the author of more than a dozen books, including “In the Shadows of the American Century: The Rise and Decline of U.S. Global Power”. But Professor McCoy’s latest book adds climate change to the usual games of human power. The title is: “To Govern the Globe: World Orders and Catastrophic Change.” 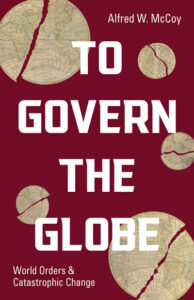 Listen to or download my 28 minute interview with Prof. Alfred W. McCoy in CD Quality or Lo-Fi

You can get a preview of McCoy’s thinking, that developed into his new book, in an essential article in the blog TomDispatch. Here is a quote from that article:

“If, as I’ve suggested in my new book, “To Govern the Globe: World Orders and Catastrophic Change”, Washington’s world system is likely to fade by 2030, thanks to a mix of domestic decline and international rivalry, Beijing’s hypernationalist hegemony will, at best, have just a couple of decades of dominance before it, too, suffers the calamitous consequences of unchecked global warming.

By 2050, as the seas submerge some of its major cities and heat begins to ravage its agricultural heartland, China will have no choice but to abandon whatever sort of global system it might have constructed. And so, as we peer dimly into the potentially catastrophic decades beyond 2050, the international community will have good reason to forge a new kind of world order unlike any that has come before.”

That key piece in TomDispatch was posted February 28, 2019. McCoy explains it takes a large force to dislodge a world order. Climate change could be that force.

What Does It Take to Destroy a World Order?

Modern climate emergency begins in 1880 when CO2 in the atmosphere was at 280 parts per million. Is it too soon, or improper, to begin writing world history in terms of climate, instead of trade and war? McCoy offers a fascinating time line of world order building in his Preface. Will we build a new climate-based history, with dates like 2007, the year the sea ice pulled back, 2009 and 2015 as missed opportunities to organize our way out, and who knows what massive climate-driven catastrophe is next? We could include this from McCoy:

In his new book “To Govern the Globe” McCoy offers a new climate timeline:

“Twenty-First Century and Beyond

2034 For the first time in US history, people over age sixty-five outnumber children under eighteen.

2049 US social welfare spending on the elderly reaches 50 percent of federal budget.

2070 North China and northern India have heat waves fatal for those without air conditioning.

2200 Global warming raises sea level by as much as seven feet.

Of course, writing a history of the future is problematic, even with known climate science. For example, the city of Shanghai may not be abandoned due to rising seas by 2070. Shanghai could be abandoned much earlier due to atomic or biological warfare. Perhaps in the next few decades, a disease far more severe than COVID-19 will make large cities untenable for humans. Or in a less bleak view, after struggles and catastrophes, most of the surviving humans find a better lifestyle is rural, because cities depend on fossil fuel energy, slaves, or animal slaves to exist, and always lead to violent outcomes.

Historians and climate scientists speak of “the great acceleration” after World War Two, in all sorts of ways, including greenhouse gases. Everything seems to move at the speed of light over the Internet, as the French philosopher Paul Virilio said. Can history itself speed up? So we see a progression of massive changes to lives, not just from climate blows, but migration, merging with artificial intelligence, and events never experienced before. Can we take the stories of empires over centuries and find them rising and falling say within ten years? Could that be China, for example?

NO WORLD ORDER, BUT WORLD CHAOS?

Beyond 2050, climate change, if not brought under some degree of control, threatens to create a new and eternally cataclysmic planet on which the very words “world order” may lose their normal meaning.

McCoy thinks the solution will come as a world government body empowered to control emissions, migration, and environmental reconstruction. I think a return to smaller feudal-like states is possible, while humans try to re-form into a civilization compatible with Earth systems. But who knows.

This book investigates key issues like the impacts of mass migrations, as millions of people flee unlivable lands. McCoy gives us facts about the massive Chinese “Belt and Road” program which were news to me. Frankly, the book is an education in the collision between “geopolitics” – the big game for world dominance – and climate change. Spoiler alert: nobody wins.

Are you part of the crowd thinking humans will just move north or south when Equatorial zones get too hot for survival? What is going on there already, in this zone where the news barely goes? We get an on-the-ground report from 40 year Yukon veteran “Radio” Rob Hopkins. He is not the co-founder of Transition Towns movement, but founder of OpenBroadcaster and much more. 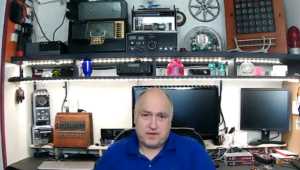 Scientists agree: the first tipping big tipping point of climate change has already triggered in the Arctic. Extremely rapid warming, permafrost thaw, and disappearing sea ice have changed Earth’s energy balance to speed warming around the world. Radio Ecoshock covered this in several recent programs. Most Arctic land and sea coast is found in Russia and Canada. In fact, about 40% of Canada is above the 60th parallel, but only about 120,000 people live there, the majority being aboriginal people.

Thawing land is shifting, coastlines are changing, long-standing ways of life have change there. To get more, we go a 40 year resident and radio broadcaster in the Yukon Territory. From a village, on a lake south of Whitehorse, Rob Hopkins and his volunteer crew broadcasts to the tiny community of Tagish, Yukon. Rob also helped establish the community radio station in Yukon’s capital city of Whitehorse on CJUC 92.5 FM, and the world by Internet. Radio Ecoshock plays on both stations. Listen live here: http://radio.garden/listen/cjuc-92-5-fm/AAd6wWw5

Officially, the Yukon is already above the 2 degree warming danger mark, and even 4.3 degrees C warmer in winter, just since 1948. The Yukon is already one of the world hot spots, surging past the United Nation temperature goals set for the end of the century. Rob is living in the future.

We learn about the true North’s dependence on fossil fuels, and efforts to get fracking going there. The Canadian Broadcasting Network just ran a feature story about remove First Nations community “Old Crow” getting off diesel for solar. But that only works for the few months when there is sunlight in the Arctic.

We talk about wildlife and wildfires. Rob tells us about polluting abandoned mines of the north, and why government COVID tests went to miners instead of the population.

Yukon government gave over half of rapid tests to mining companies

Here is a little video teaser about the new film coming out about Rob and his efforts to put abandoned technology to work in the North.

Radio Ecoshock provides hard truths to inform citizens and activists. You can help with your donation, or sign up for monthly support. I treasure the listeners who send $10 a month, because they cover most of the monthly costs of making and distributing this program. We have to pay for this web site, making all shows free to people across the world. People take away over a gigabyte of audio a day. That costs $$ – but it’s totally worth it to get this important information distributed as widely as possible.

Please add your donation, according to your means. It is quick and easy.

Radio stations get Ecoshock for free, and we have no advertising or gimmick products. Very occasionally a larger donor has covered unusual costs, like replacing the main computer, or installing a better system for backup.

But you can tell, this isn’t about the money. The show has been on the air since 2006, and I covered all the costs for the first few years. I knew from the start, broadcasting about science, climate change and environmental activism would never pay. My main income is old age checks from the Canadian government!

Bottom line as always: Thank you for listening, and caring about our world.