What will the climate be like in the year 2500? Provocative new science: mid-West wheat fields transformed to tropical palms and grassland scrub where the mighty Amazon rainforest once stood. Lead author Chris Lyon takes us deeper into the future. Then the great escape: getting off the planet before existential risk ends the human experiment. “Calamity Theory” with author Joshua Schuster. Get in the time machine.

Listen to or download my 30 minute interview with Joshua Schuster, author of “Calamity Theory” in CD Quality or Lo-Fi

In Kim Stanley Robinson’s nonfiction sci-fi book “The Ministry for the Future”, 20 million in India died in a monster heat event. As a new project, a team at University of Leeds modeled and then made an artistic portrayal of India in the year 2500. People survive outside only in air-conditioned space suits.

Talk about inheritance! What kind of world are we leaving our grand-children? Does it matter if great-grand-children inherit a Hellish climate? Until now, the great engines of climate science have not tackled the longer future. Reports, treaties, and projections end at the year 2100. But no matter what we do, the world will keep on heating up, possibly beyond the limits of endurance for humans and crops. Certainly the sea will keep rising over shorelines and ports.

A study published in September 2021 takes us into the climate of 2200 right up to year 2500. After running the models for different scenarios, they engaged artists to show landscapes on the new hotter Earth. The Mid-West wheat regions become tropical by then. Drone machines harvest crops in the no-human-outside lands of India.

The paper is titled “Climate change research and action must look beyond 2100”. We reached the lead author, Dr. Christopher Lyon. He is from McGill University in Quebec, and a Visiting Research Fellow at the University of Leeds, UK. Lyon has published or co-authored several studies on Resiliency, including a case study in Scotland, Prepared for the Scottish Government Resilience Division. 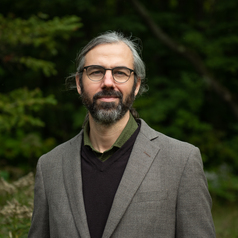 RESILIENCY – TO A POINT

After tens of thousands died in the European heat wave of 2003, governments around the world changed toward adaptation. With cooling centers, warnings, checking up on seniors, etc. the number of people dying in heat waves may actually go down for a decade or two. Human societies can adapt to growing heat up to a point. But what about the crops that keep billions of us alive? Chris talks to us about agricultural challenges after 2100.

Is there a point, for people in many nations, when “resiliency” means surviving mass movement toward the poles, or upward into mountain environments? Can developed nations stall for a century of two by burrowing underground, and technology like solar-powered air-conditioning? Are crops the real bottleneck where Earth can no longer sustain billions of humans and their livestock? Is the whole concept of “resiliency” becoming pointless over time?

As I look at Figure 3 in this paper, the central Tropical belt of Earth fills more and more with an angry red, representing temperatures too hot for humans to survive without support by machines, like air-conditioning. In the worst case, RCP6.0, it looks like up to a billion people will either experience mass death, mass migration, or both.

“By 2500 under RCP6.0, the proportion of the year exhibiting very strong heat stress is greater than 50% in much of Africa, the Amazon, the Arabian Peninsula, Southeast Asia, the Maritime Continent, and northern Australia. By contrast, today these regions experience this level of heat stress between 0% (Maritime Continent) and 25% (Arabian Peninsula) of the year. Many of these regions are only slightly less affected in RCP4.5 in this timeframe. In contrast, heat stress projections do not become substantially worse beyond 2100 in RCP2.6, showing the long-term advantages of climate mitigation”

On December 15, I posted my program on the French philosopher Paul Virilio. He foresaw this mass migration:

Paul Virilio and the planetary accident

“Nearly one billion people will be displaced between now and 2040-2050… This is one of the most formidable events in the history of humankind: a repopulation. Like it or not, the migrant problem is not simply a problem of work, refugees, of this or that. This is about planetary repopulation. In 2000, the UN held a conference called ‘Repopulation Through Migration’… We will repopulate the world differently.”

Virilio, also a city planner (as he says in this video) predicts a great urban exodus, much bigger than the rural exodus of the 20th Century. He envisions:

“…a Europe without cities, without sedentarity, where everything is in flight and escapes – that is a first. So indeed we are talking about a censored word: deportation.”

We are reminded of the great spread of the human species somewhere around 200,000 years ago, fanning out from Africa to Asia and beyond. Once again, millions will move out of Africa, as surely as great tribes wandered out of Germany in the times of the late Romans, or the whites “repopulating” North America. All that is small compared to the repopulation already begun and swelling hugely as climate change continues.

HUGE LOSS OF CROP LANDS, AND CHANGES IN WHAT HUMANS EAT

THE END OF THE AMERICAN/CANADIAN BREADBASKET?

“A characterization of the ‘breadbasket’ area of the US Midwest today and in 2500. In 2500, monocultured cereals may be replaced by a subtropical agroforestry of fictional plants (based on oil palms and arid zone succulents). Potential future water capture and irrigation devices can be glimpsed among the crops to offset the effects of extreme summer heat.

WE ARE COMMITTED NOW…

“Our projections past 2100 indicate that without rapid and significant reductions in greenhouse gas emissions, large areas of the Earth will change in ways that reduce their capacity to support large-scale human occupation. The long-term effects of 21st century warming will be felt for centuries to come, even if emissions are limited in the future.”

Here is another term we all need to learn, to understand the impacts of climate change. Our paper (Lyon et al) says:

RESOURCES TO DIG FURTHER INTO SCIENCE OF COMING CENTURIES

Commentary on the paper by Chris A. Boulton

(but we commit the climate to those changes now…)

“Climate tipping points, where changes in the external forcing of a system could cause large, often irreversible changes to its stability are possible (Lenton et al., 2008), without any changes in the system observed by 2100. One such tipping point concerns the dieback of the Amazon rainforest, but only in a few models is this observed by the end of the century due to drier conditions; in other models, the Amazon appears to remain stable, or even grow in biomass (Huntingford et al., 2013).

However, due to the slow dynamics of the vegetation, the forest may already be ‘committed’ to dieback, even if it appears stable in 2100 (Jones et al., 2009). Indeed, model studies have shown that without further emissions past 2100, allowing the climate system and in turn the Amazon rainforest to reach an equilibrium state, the condition of the forest could be greatly degraded (Boulton et al., 2017). With the rainforest acting as the world’s largest terrestrial sink, forest loss will have a huge impact on the global carbon cycle and thus future climate change.”

Call it “long-termism” or “effective altruism” but get ready for a ride. Big names like physicist Stephen Hawking and Elon Musk boost the cause. It sounds good at the start: we owe a duty to future humans and all intelligent life from animals to the octopus. In an apparently barren galaxy, we must at all costs prevent extinction of intelligent life on Earth. To do that, says Oxford philosopher Nick Bostrom, humans will merge with artificial intelligence, becoming transhuman. That new life form must, MUST, spread beyond this planet to populate other worlds.

Bostrom catalogs the most dire threats, from nuclear war through climate change to genetic tampering. Others get on board, like Australian philosopher Toby Ord, and Astronomer Royal Sir Martin Rees. Millions of dollars flow in from tech moguls like Bill and Melinda Gates and Peter Thiel. New institutions are founded such as The Sentience Institute, Oxford’s Centre for the Study of Existential Risk, and the Future of Life Institute at the University of Cambridge. I hope to cover existential risks more in a future Radio Ecoshock show.

That is where we start, at the bottom of a foggy future where post-humans inhabit a technical utopia in the stars. Is it real? Is it harmful or helpful to us now? Toby Ord, author of the influential book “The Precipice” told me he is too busy with other projects to appear on Radio Ecoshock. Nick Bostrom’s assistant says he is on leave until end of January. Bostrom is author of “Superintelligence: Paths, Dangers, Strategies”. Our audience is probably too small for him anyway. So we depend on two critics with views on ecology, justice, and what it means to be human, where we are, as we are. 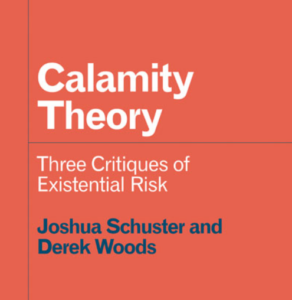 Canadian academics Joshua Schuster and Derek Woods just published their book “Calamity Theory – Three Critiques of Existential Risk”. Dr. Schuster is author of “The Ecology of Modernism: American Environments and Avant-Garde Poetics”. He is currently on Sabbatical in France. 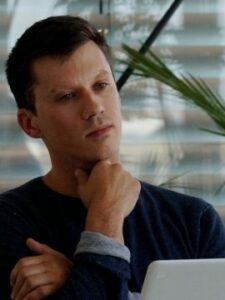 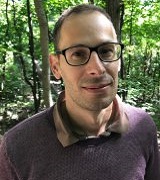 For Nick Bostrom, humanity as we know it cannot be saved. We are completely obligated to transform ourselves into a new species, become “transhuman” and then “post-human” by merging with Artificial Intelligence and machines. Then we can enter a Utopia that lasts a billion years on a billion planets. It sounds so much like some New Age religions, or even old Messianic texts of Heaven and Hell.

In the existential risk crowd, climate change is a minor hiccup along the road, as long as it doesn’t wipe out humanity. We can tolerate all kinds of evil, from mass starvation to pandemics, as long as the core of science and technology continues, they say. Does that skew priorities for the substantial list of multi-billionaires who adopt Effective Altruism?

As Woods and Schuster tell us in the book “Calamity Theory”:

“The Future of Humanity Institute received 13.3 million pounds in funding from the Open Philanthropy Project in 2018, an effective altruism group primarily funded by Dustin Moskovitz, who cofounded Facebook with Mark Zuckerberg and three others. Skype cofounder Jaan Tallinn is also cofounder of the Boston-area Future of Life Institute, a think tank with ties to MIT devoted to studying AI safety and other technological extinction risks. Musk sits on the FLI scientific advisory board, and on a similar board at the Cambridge Centre.”

I would like to thank Andrew Kingham Murphie, PhD in Australia for the tip pointing me to this story.

And thank you to Ecoshock supporters, listeners who donate (once or monthly) to help me keep producing and distributing this program globally, free to all. If you can help, check this out.

Well I stopped in at the Body Shop
Said to the guy:
I want stereo FM installed in my teeth
And take this mole off my back
And put it on my cheek
And uh…while I’m here, why don’t you give me
Some of those high-heeled feet?
And he said: Listen there’s no guarantee
Nature’s got rules and Nature’s got laws
But listen look out for the monkey’s paw