Scientists warn about previous gross underestimates of just how many people will be flooded out. It could be hundreds of millions. Our guide is Professor Jonathan Bamber from the Bristol Glaciology Centre, UK. Then Lead author of “Navigating transformation of biodiversity and climate” – Dr. Pablo A. Marquet , Professor at Catholic University of Chile and renowned South American ecologist. Select replay interviews from Radio Ecoshock 2019. Next week: Heat Up; Grid Down.

Every newscast has to claim “Breaking News”. But this really is! The world’s largest iceberg just broke off Antarctica. Satellites and aircraft confirm it. According to Bloomberg News May 19, this berg is about the size of the Spanish Island of Majorca. According to measurements by the European Space Agency, it is bigger than Long Island off New York. 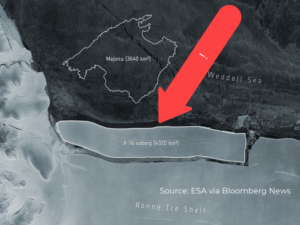 A record-size release of ice from Antarctica is just another sign the frozen continent is beginning to melt and break up. Over this century that will add a lot to sea level rise. Possibly a meter or more of seawater will pour into ports and heavily populated river deltas. The heating of Greenland and Antarctica likely spells the end of some treasured Pacific Island nations. Nobody knows the total economic cost of creating rising seas, or where hundreds of millions of people will go.

This is a perfect time to revisit interviews that got a bit lost as world attention swung to the COVID pandemic in late 2019. First up for these Ecoshock replay interviews: Dr. Jonathan Bamber on the exact topic of ice and rising seas. Then we return to a talk with South American ecologist Pablo Marquet. As promised to microbiologist David Thaler a few weeks ago, this is part of my commitment to never forget: the climate fight is about saving all manner of living things.

I have posted the summary for each interview here, plus the link where you can dig deeper, with all my notes and comments in my blog.

Astounding new science finds the amount of land and people exposed to sea level rise has been wildly underestimated. At least 100 million more people will be flooded out this century. A lot of that new sea water is coming from melting ice at the Poles. Professor Jonathan Bamber is a specialist in the great ice melt, providing data used by scientists around the world. Dr. Bamber is from the Bristol Glaciology Centre at UK’s University of Bristol.

Hundreds of Millions to Be Flooded Out by the Sea

At the high end – at our current rate of emissions – almost one in seven people on the planet will be facing salt water in their homes, businesses, streets, and farms at least once a year. Whoever is wealthy enough and has the foresight must begin construction of massive surge defenses now, this year. But for millions of farmers and city dwellers, retreat will be the only option. Expect climate migrants fleeing rising seas.

Eminent Chilean ecologist Pablo Marquet on the marriage of climate and the species.

Climate Is A Living Thing

When it comes to preparing for the future here on Earth, physics is key, chemistry and geology too. But if we forget this is a living planet we will not get it right. The prestigious journal Science Advances brings it all home with an editorial on the marriage of life, life sciences and climate change. It introduces a Special Collection of papers, just in time for the Twenty Fifth Conference of the Parties, COP25 in Madrid. It is even more vital this voice for the species reaches you, and your national delegates to the COP26 meeting scheduled for Glasgow next December.

To sum it up, we reached a lead author in the editorial titled “Navigating transformation of biodiversity and climate”. Dr. Pablo A. Marquet is a Professor at Catholic University of Chile, and Principal Investigator for the Institute of Ecology and Biodiversity.

NEXT WEEK – HOT GRID DOWN

There is growing alarm among those who know: if the electric grid goes down during the new record-setting heat waves, it could become a mass casualty event. Hardly any city is protected. A new study looks into dangerous heat levels in American cities and the growing trend of power blackouts in the United States. Listen for two serious experts on grid stability and security next week.

A special thanks to all the listeners who support this show. Listener donations make Radio Ecoshock advertising-free, and easily available to people all over the world. You make this program possible!