Abrupt climate change: unimaginable changes in less than a lifetime. From Copenhagen Dr. Sune Olander Rasmussen explains the risks. Plus: From GEOMAR at the Helmholtz Centre for Ocean Research, Dr. Andreas Oschlies takes us on a tour of deep life and its future.

Radio Ecoshock is made possible by you, the listeners. To keep it coming, and going out free to anyone who listens anywhere in the world, please make a small donation or sign up for a low-cost monthly subscription. Your help literally keeps me going on this mission to get the voice of scientists, authors and activists out to a world that badly needs to hear it. Find out more here.

A stunning, abrupt climate shift is possible. During the last ice age, temperatures in Greenland heated up anywhere from 5 to 16 degrees Celsius in decades. That is up to 28 degrees Fahrenheit hotter. The Arctic is already warming beyond anything seen by modern humans, and last year Arctic sea ice levels were the second lowest ever recorded. Are we rushing toward that tipping point now?

Our guest is Dr. Sune Olander Rasmussen, Distinguished Associate Professor at the Centre for Ice and Climate in Denmark’s Niels Bohr Institute. He is co-author of the new paper published in Nature Communications, April 8, 2021: “The anatomy of past abrupt warmings recorded in Greenland ice”.

This edit for radio by Mark Weaver of WMBR, MIT’s all-volunteer non-commercial radio station in Cambridge, Massachusetts.  Thanks Mark!

When temperatures around Greenland shot up 12 degrees C. or more – about 21 degrees Fahrenheit – was that an isolated regional event or did it affect weather and climate around the world? Rasmussen co-authored a paper about that last year in the journal Science: “Synchronous timing of abrupt climate changes during the last glacial period.”

Here is my big worry, and the reason I contacted Sune. We know 2020 was the second-lowest sea ice coverage in the Arctic since accurate records began. Sune’s science suggests sea ice levels may be tightly coupled with other drivers leading to extreme warming in the Arctic – as high as 16 degrees C. hotter. That is about 28 degrees Fahrenheit and it changes the climate of the world. Could a major Arctic warming be already underway but we are living through the lag time?

In a recent Radio Ecoshock interview, Johannes Lohmann from Neils Bohr explained the speed of climate change can bring tipping points sooner than most models suggest. We are in uncharted territory when one species changes the atmosphere rapidly. These are not minor concerns. If the Arctic heats that quickly, it could destabilize weather and agriculture across the Northern Hemisphere at the very least.

A graph of sudden variations in climate of Greenland and the North Atlantic show the period between 30 and 50 thousand years ago was rocky, with about 7 such cliff-like rises in temperature in those regions.

“The emerging picture of the D-O warmings is one in which the components of the climate system are so tightly coupled that it may not be possible to resolve significant leads and lags between them, and consequently, it may be elusive to search for a single sequence of events in proxy data that can adequately describe all Last Glacial abrupt climate transitions. “

For example, the sea ice could disappear first, or last in any of the abrupt shifts, before Greenland ice melt or AMOC changes. The work together, but so far not in a particular order.

THE LENGTH OF TIME FOR THE TRANSITION IS VARIABLE, BUT LESS THAN 200 YEARS…

In eternal darkness, under extreme pressure, sea creatures populate even the deep ocean. We know too little about them. Humans seldom venture there. And yet, even there at the bottom of the sea, human-induced climate change will throw danger into the ecosphere. It is not heat directly, but something else.

Here to explain is Dr. Andreas Oschlies. He is Professor of “Marine Biogeochemical Modelling” at the GEOMAR project. That is part of the Helmholtz Centre for Ocean Research, the government-funded science agency in Kiel, Germany. Dr. Oschlies has serious news about our long-term impact on ocean life, as published in Nature Communications in April 2021. The title is: “A committed fourfold increase in ocean oxygen loss”. 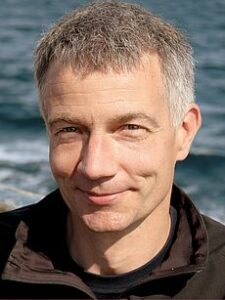 Pretty well everything in this new article surprised me. To begin, until recently many presumed the world would keep on warming long after we mange to stop our carbon dioxide emissions. Can we really think the news is better – that various forces stabilize temperatures at what ever the new normal becomes, when we reach Net Zero emissions? Is that the new thinking?

A MORE STABLE CLIMATE ONCE EMISSIONS HAVE STOPPED?

“After emissions are stopped by the end of 2020, simulated surface air temperatures increase by another 0.04 °C within 7 years before slowly leveling off at about 0.01 °C above the year 2020 temperatures towards the end of the twenty-first century and staying within ±0.02 °C at this level until year 2650 (Fig. 1a).”

ALEX SAYS: I am not sure I believe this yet. First of all, there is no sign of emissions stopping, or even reaching Paris targets by 2030. So this is a moot exercise. But my gut feeling is reality will intrude with continued warming despite these scientific predictions. Other such forecasts have turned out to be either wrong, or miss significant processes. See: every IPCC report and predictions from year 2000 through 2010. And all missed the crash of Arctic sea ice, and underestimated more climate developments.

“According to the model results, the deep ocean will thereby lose more than 10% of its pre-industrial oxygen content even if CO2 emissions and thus global warming were stopped today. In the surface layer, however, the ongoing deoxygenation will largely stop once CO2 emissions are stopped.”

Surface temperature aside, we know some natural forces are committed to change over the centuries no matter what. For example, NASA predicts melting of Thwaites Glacier in Antarctica is now “unstoppable”. Other systems like permafrost thaw may already be tipped. But now Oschlies and his colleagues find another unstoppable change in the deep ocean: deoxygenation. Oxygen loss will continue down in the deep ocean for centuries after we stop emitting.

At the end of the interview, we briefly touch on Dr Oschlies’ role as coordinator of the German Research funded study of “Climate Engineering”. We did not have time for his part in a collaborative research group on “Climate-Biogeochemistry Interactions in the Tropical Ocean”.

From the new paper in Nature:

“On a positive note, present-day oxygen minimum zones in the upper few hundred meters experience, on average, only a little change once CO2 emissions are stopped in the model (Figs. 2h and 4b). This indicates that rapid emission reduction can halt the increasing threat of deoxygenation in the upper ocean that holds much of the known biodiversity and provides the main ocean ecosystem services deemed societally relevant.

For deep waters of the ocean, however, there is little hope that even an immediate stop of CO2 emissions will avert a drastic decline in oxygen concentrations over the next decades to centuries, significantly reducing metabolically viable habitats of deep-sea animals. Although further analysis of models and data is required for a more robust and quantitative understanding of ocean deoxygenation, the deep ocean appears committed to turning into an as-yet unrecognized area where the slogan of the American Lung Association “If you can’t breathe, nothing else matters” will become reality for centuries to come.”

ALEX SAYS This is a classic example of what the Oschlies specialty of “biogeochemistry of the ocean” is all about. The deep ocean oxygen does not continue to decline due to warmer waters holding less gas, like a classic model where only physics matters – but rather because ocean heating and perhaps other climatic factors will slow ocean circulation (just as the AMOC has already shown to have slowed) which means the resident oxygen remains more static, with less mixing. But the species built for that formerly stable level of oxygen start to deplete the supply. It’s like a crowd breathing in a room with all the doors and windows closed. Eventually oxygen becomes poor and rare.

Here is a good science press article about the implications of the new Oschlies study, by Tim Radford: “Many creatures of the deep face a stifling future”.

Many creatures of the deep face a stifling future

That’s it for this week. I’m Alex Smith. Thank you for keeping your ears on reality in this fast-changing world. Did you make a donation or get a subscription? During the pandemic. Donations are going down for non-profits across the board. I’m hearing from NGO’s and other citizen-supported journalists who may be closing up shop. We all need to pay bills. Please help me keep going if you can. Alex.

Is The Micro World In Trouble Too? →
← Permafrost Thaw = Climate Disaster? Maybe.
Comments