Rebel Against the Future

Scientists rush to find the cause of natural instability, & whether it could happen again – From Australia, Dr. Laurie Menviel. Matt Fitzpatrick, head of Global Change & Biodiversity Lab – with a map showing the future climate for most cities in North America, & one for Europe. Plus British journalist George Monbiot at Extinction Rebellion.

Just before everyone rushes outdoors to garden or summer vacation, please remember our global audience will continue to download thousands of Radio Ecoshock shows. That costs money. Producing the show and staying alive costs money. Please donate if you can. There is no big foundation supporting this show, no corporate sponsors. It all depends on you as a listener and blog reader!

The great southern ocean, reaching down to Antarctica, has absorbed up to 10% of our greenhouse gas emissions. Without that we would be much hotter already. But that ocean sink appears to be weakening. In a worst-case scenario scientists, are exploring why carbon dioxide jumped 40 parts per million in a few decades not so long ago, and whether that natural increase in warming gases could happen again.

Dr. Laurie Menviel is a leading scientist in the field, with many papers. She is currently a researcher at the University of New South Wales in Australia. Laurie was just awarded the 2019 Dorothy Hill Medal for her work as a ground-breaking young scientist.

It appears that in Earth’s latest glacial times, the planet’s climate went rogue, departing from the previously predictable cycles caused by our orbit and tilt. A predictable pattern of ice ages and warmer times was broken. Earth entered much longer colder ice ages, just at the time homo sapiens was emerging on this planet. That means the planet itself has an internal climate sensitivity that is not dependent on our position relative to the sun. We need to know how that works, because humans may be triggering that kind of process, this time toward warming.

“Dr Menviel is an exceptional early career researcher who has made major contributions to our understanding of the oceanic circulation, its variability and its impact on global climate, the carbon cycle and the cryosphere. Widely considered as a leader in our understanding of abrupt climate change, Dr Menviel has made a series of ground-breaking discoveries in several topical areas of earth science: detecting past changes in oceanic circulation; understanding the role of ocean circulation in past and future abrupt climate change; evaluation of the impact of changes in oceanic circulation on the carbon cycle; and constraining the stability and variability of the Antarctic ice sheet.”

As we learn in this interview, around 16,000 years ago, a CO2 rise happened over mere decades, probably due to more intense westerly winds in the southern hemisphere. We are seeing a big change in southern hemisphere winds now, as the strongest winds retreat from Australia and gather closer to the South Pole.

The prime concept is the “Westerlies” in the Southern Hemisphere. Wikipedia says:

“The westerlies, anti-trades, or prevailing westerlies, are prevailing winds from the west toward the east in the middle latitudes between 30 and 60 degrees latitude. They originate from the high-pressure areas in the horse latitudes and trend towards the poles and steer extratropical cyclones in this general manner.”

“Our study highlights the crucial role of SH [Southern Hemisphere] westerlies in driving abrupt atmospheric CO2 rise and associated global climate changes. Given the projected poleward intensification of SH westerlies over the 21st Century, and the fact that the Southern Ocean has absorbed ~10% of anthropogenic CO2 emissions, our results suggest a future reduction in CO2 sequestration in the Southern Ocean, with significant impacts on future atmospheric CO2 and climate change.”

“It is crucial to document and understand the processes that led to this ice age intensification because, in the absence of changes in orbital forcing, this transition indicates an internal change in the sensitivity of the climate system.”

A NEW RECORD OF THE SOUTHERN HEMISPHERE GOING BACK 1.5 MILLION YEARS

In our interview we also discuss this: “Adam Hasenfratz and colleagues present a new 1.5 million-year record of temperature and salinity in the Southern Ocean. Using trace elements and oxygen isotopes locked inside the microscopic shells of foraminifera, a species of single-celled planktonic animals, Hasenfratz et al. evaluated changes in Southern Ocean circulation across the MPT.”

Most climate science is still coming from the Northern Hemisphere. We know a lot more about the North Atlantic than the South Atlantic. I wonder if a bias has developed that favors the Arctic as a driver of big changes, while leaving out important developments in Australia and the Antarctic. But now we have a detailed map of 1.5 million years in the Southern Ocean. That paper is “The residence time of Southern Ocean surface waters and the 100,000-year ice age cycle“, published March 8, 2019.

In the same issue of the journal Science, Laurie Menviel published her article “The southern amplifier“. But the case of the rapid 40 ppm CO2 rise comes in this earlier Menviel paper, published in Nature Communications, July 27, 2018 “Southern Hemisphere westerlies as a driver of the early deglacial atmospheric CO2 rise“.

Dr Menviel studied abrupt changes that happened in the past, and not that long before humans developed agriculture and civilization. Is it possible that a poorly understood natural cycle could kick in, releasing even more carbon dioxide on top of our enormous continuing emissions? My general feeling after reading her papers is: humans are playing amid giant forces that we don’t understand very well, – forces that could change our climate fairly quickly into brand new territory. Menviel writes:

“Such amplification may also occur as a result of anthropogenic emissions. The atmospheric CO2 concentration is now at its highest point since at least 800,000 years ago. The ocean has strongly mitigated this atmospheric CO2 increase, particularly in the Southern Ocean, which has absorbed ~10% of the emissions.

The observed poleward intensification of Southern Hemispheric westerly winds and increased Southern Ocean stratification, which are projected to be amplified with further greenhouse gas emissions, could weaken the Southern Ocean carbon sink and induce a nonlinear response of the oceanic circulation and continental icesheets over the coming centuries.”

In new science, just published in Nature March 25th, a team of researchers announce that Greenland’s greatest source of sea level rise, the Jakoshavn Glacier has reversed from record ice loss to a gain of ice over the past two years. Apparently this shows again the very big role of ocean temperatures modulating ice loss – another Laurie Menviel specialty.

MATT FITZPATRICK – MAPPING THE CLIMATE FUTURE OF EACH CITY

“Within the lifetime of children living today, the climate of many regions is projected to change from the familiar to conditions unlike those experienced in the same place by their parents, grandparents, or perhaps any generation in millenia.”
– from a new paper led by Dr. Matt Fitzpatrick

Would you like to move your city to somewhere warmer? No need. According to new science, that different climate will probably come to you. By the end of this century, some American cities will experience climates never seen before.

Our tour guide is the lead author of a new paper published in Nature. Matt Fitzpatrick leads the Fitzpatrick Lab Global Change & Biodiversity, at the University of Maryland Center for Environmental Science Appalachian Lab. He is listed as the “Principal Investigator,” with a team of scientists, and over 50 papers published. 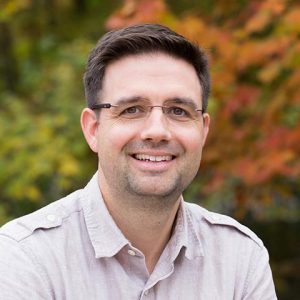 On February 12, 2019, Matt and Robert Dunn published the paper “Contemporary climatic analogs for 540 North American urban areas in the late 21st century“. They also gave America a tool to see the climate destination of their city. Find that interactive map at tinyurl.com/urbanclimate . Their research covered about 75% of the population of the United States, and around half the population of Canada.

In just one example from data in this paper, for Washington D.C. the annual average high temperature would be ten degrees F. warmer by 2080 under the current trajectory of RCP8.5. Washington would also get an extra ten inches of rain as an annual average. It’s going to be a lot hotter and wetter in the nation’s capital, where politicians currently do nothing about climate change except empower fossil fuel companies to make it worse.

In the paper we find:

“Put another way, by the 2080’s climate of cities in the northeast will tend to feel more like the humid subtropical climates typical of parts of the Midwest or southeastern U.S. today (warmer and wetter in all seasons), whereas the climates of western cities are expected to become more like those of the desert Southwest or southern California (warmer in all seasons, with changes in the amount and seasonal distribution of precipitation.”

THE PATHWAY MAKES A HUGE DIFFERENCE

“On average, the geographic distance from each urban area to its best contemporary climatic analog was nearly twice as large for RCP8.5 (849.8 km) as compared to RCP4.5 (514.4 km). In other words, the average urban dweller in the United States would have to drive nearly 1000 km to get to a climate like that likely to be experienced (under RCP8.5) in their city.”

In the end, it might seem like AMERICAN CITIES ARE MOVING on the map. That is another way of looking at the impacts of climate change. Plus, remember these big changes are just what can happen on our current path by 2080. Warming will continue for centuries after.

A similar map for European cities was published by Guillaume Rohat, et al. in 2018: “Characterization of European cities’ climate shift – an exploratory study based on climate analogues“.

READ MORE ABOUT THE UNPRECEDENTED CLIMATES COMING TO CITIES

“USA Cities ‘Will Experience Climates with No Modern Equivalent‘” in the Daily Galaxy and “Climate of North American cities will shift hundreds of miles in one generation” in Science Daily.

OTHER AREAS THAT MATT RESEARCHES

Much of Matt’s work is based on the study of “phenology“. This is defined as: “the study of cyclic and seasonal natural phenomena, especially in relation to climate and plant and animal life.” In another topic, I thought global warming was developing too fast for evolution to help species cope. But Matt and his colleagues study genetic adaptation.

I worry about this under-reported story from Matt’s work: “Aquatic ecosystems are considered among the most vulnerable and endangered in the world, with the projected future extinction rate of freshwater fauna rivaling estimates for tropical rainforest species.” We never talk about that or hear about that in the media. How serious is the freshwater extinction situation?

On March 28th, journalist and author George Monbiot spoke at Oxford University, organized by Extinction Rebellion. In this show I condense a few clips from that talk, available in full on You tube.

At the end of last week, major cities in Korea were threatened by wildfires. Early fires have already appeared in western North America. Song-writer David Rovics realized he is an early climate refugee, avoiding the summer smoke in Portland Oregon, for a coffee-house in Denmark. But then, projections for rising seas show Denmark could disappear as a country, as surely as low-lying Pacific Islands. Nobody escapes global climate disruption. Regular listeners can see all this coming, direct from our breaking science.

I’m Alex Smith. Thank you for listening. Stay tuned to your future, with Radio Ecoshock. 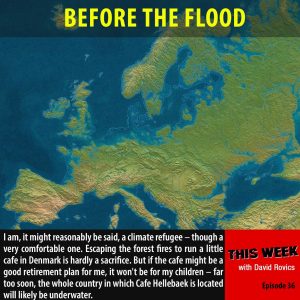