All I ask, please help when you can, with a donation or subscription to Radio Ecoshock. The helps pay not just for production, but the tens of thousands of free downloads each month, getting the message out all over the world. Find out more here.

This is Black History Month in the United States. It started me thinking about justice, for people and the environment.

We open the program with the song “Down in Mississippi”. It is Mavis Staples, singing about her own life, from the album “We’ll Never Turn Back”. The song includes the guitar-work of producer Ry Cooder. You’ll hear the whole thing at the end of this program.

We also play a selection from “Mississippi Flatlands” by artist Memphis Gold. He’s from Tennessee, but is now living in Washington D.C. I really appreciate his style. The song is from the album “Pickin’ in High Cotton” on Stackhouse Records.

Can we learn from the earliest agricultural workers? Are there Southern crops and techniques that we’ll need as climate change develops? Yes on all counts. This dig into an unreported scene will work for listeners in every country.

We’ve got two fabulous guides. Michael W. Twitty is a culinary historian of African and African American foodways. He’s just returned from a tour of the former slave states, living and recording those important self-sufficient ways of growing and cooking food, from seeds through open fire cooking.

Our Washington correspondent Gerri Williams, with her own expertise at the College of Agriculture, sits down with Michael Twitty.

Then it’s off to Atlanta George with another remarkable mind. I talk with K. Rashid Nuri about everything from the decline of black farming, to the revival of urban agriculture and organic growing.

We can’t do better than Rashid. He’s a Harvard Grad who worked for decades in the international food industry, all over the world. Nuri was an adviser to the US Department of Agriculture in the Clinton Administration. Now he’s come full circle to head up the Truly Living Well urban farm operation in Atlanta, and the Georgia Organic Farmers movement.

Get ready to learn about adapting to climate change, protecting your own food health, southern living, and the struggle for economic justice.

This is Radio Ecoshock. 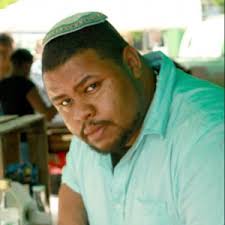 When the African American Heritage Seed Collection was begun, organizers turned to culinary historian Michael W. Twitty. Michael has just returned from a tour of the former slave states in the American South. He was seeking his roots – and cooking them!

Michael recently met up with Radio Ecoshock Washington correspondent Gerri Williams. As a Research Associate at the College of Agriculture, Urban Sustainability & Environmental Science at the University of D. C., Gerri is tuned into African American culture, food production, and the environment.

I’m betting you don’t know about “slave gardens”, or the two foods that may move from the bird feeder to your dinner plate, as climate change develops.

I found this whole interview fascinating and useful. We pick up tips about adapting to climate change, the importance of natural food, and the crops that you might want to discover.

Michael’s histories of African American foodways have been published all over, including his own recipes from beans to pork to “Michael Twitty’s Heirloom Cowhorn Okra Soup”. Find his web site here.

My thanks to Gerri Williams for knowing the right people, and the right questions. 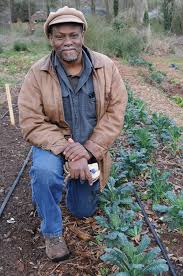 Why not farm in the city?

Our guest is a Harvard Grad with plenty of big-time qualifications in both industrial and organic agriculture. K. Rashid Nuri worked a dozen years with the world food giant Cargill. He served four years in the Clinton Administration, in the U.S. Department of Agriculture, as the Deputy Administrator of the Farm Service Agency and Foreign Agricultural Service. Right now, in Atlanta Georgia, Rashid leads an inspiring urban food farm called “Truly Living Well”.

Right in Atlanta, Truly Living Well farms donated land in various plots. They sell top quality produce to high end restaurants, providing more than a dozen jobs for folks who really need the work. Truly Living Well also supplements food for the needy, either at low cost, or even free to those who need it.

We’re learning from the survivors, from the deep south, during Black American History Month 2013. I’m Alex Smith. We all want to be survivors, so let’s learn from those who know.

It seems pretty obvious there was an ugly twist to farming in the history of African Americans and that was share-cropping. For many, it must have an act of liberty just to get away from those farms.

Then it turns out the U.S. Department of Agriculture was turning down farm loans to thousands of black farmers, while giving them to whites. And that wasn’t back in the 1950’s. We’re talking as recently as the 1980’s and 90’s. A 1.2 billion dollar settlement was finally agreed in 2011. Rashid Nuri is exceptionally well informed on all this, and says it’s not satisfactory. A lot of the money goes to lawyers, and people who lost their farms were not fairly compensated. It is known as the “Pigford” case.

One way this discrimination worked: a “good farmer” (likely white and connected) got their loans for planting the year’s new crop in January when it was needed. “Others” (mostly black and hispanic farmers) didn’t get their loans processed until it was too late to plant, say in April or May. But they had put their farms up as security, and risked losing the land itself, not to mention the harvest they needed to keep on going.

Rashid Nurispoke at the Black Farmers and Urban Gardeners Conference. Some really shocking statistics came out of that. Let me quote a couple:

“Nearly 50% of African American children will develop diabetes at some point in their lives.

About four out of five African American women are overweight or obese.

In 2007, African Americans were 1.4 times as likely to be obese as Non- Hispanic Whites.

Deaths from heart disease and stroke are almost twice the rate for African Americans as compared to Whites.”

Just out in the news this past month, is research showing the so-called “Southern diet” is actually lethal. Getting real fresh veggies into the southern diet can literally save lives.

Michelle Obama planted a garden at the White House. She congratulated Walmart when that company announced they would start selling fresh vegetables. But Nuri wonders how “organic” Walmat food is, when it travels all the way from polluted China.

We also discuss whether drought-resistant varieties, that can take the heat, may be needed further north, as climate change becomes worse. Nuri cautions against using genetically modified organisms (GMO’s) saying our digestive system has not evolved to handle them properly.

After a distinguished career in agriculture, in many parts of the world, Rashid returned to Atlanta,Georgia to lead the non-profit urban farming operation called “Truly Living Well.” Find that at trulylivingwell.com. I want to thank Heather Gray and Nadia Ali of the “Just Peace” program on WFRG, Atlanta for introducing me to Rashid.

Write me, Alex Smith, any time with your tips or feed-back. The address is radio at ecoshock.org I really appreciate your time and attention listening each week.

We began this program with Mavis Staples. I’ve been a fan of “Pop” Staples and the Staples Singers since I was a kid, but I always got a special thrill when I heard Mavis open up. Late in life, this famous gospel, soul, and civil rights singer released a kind of musical biography in the album “We’ll Never Turn Back”.

Staples tells us about the struggle for justice, and the strong, deep hope that moved her through it all. The album was recorded in 2007 produced by another favorite of mine, roots and rocker Ry Cooder. Ry’s guitar magic is all through this album. So we’ll finish off where we began, “Down in Mississippi” with Mavis Staples. 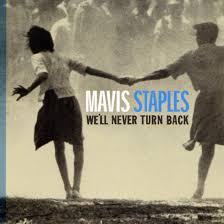 Watch Ry Cooder and Mavis record this album on You tube!

Living on The Edge →
← How Will We Power the Future?
2 Comments